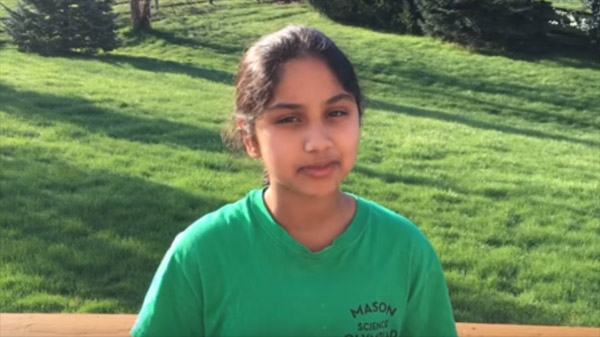 Maanasa Mendu, a 13-year-old student at William Mason High School in Mason, Ohio, has won the 2016 Discovery Education 3M Young Scientist Challenge and became ‘America’s Top Young Scientist.’ Her prize included a check for $25,000 to help with her future projects.

The others in the top four of the competition included another Indian American: Rohan Wagh, apart from Amelia Day and Kaien Yang.

Mendu’s cost-effective technology to create energy comprised of solar leaves. The leaves generate energy from precipitation, the wind, and even the sun using a solar cell and piezoelectric material (the part of the leaf that picks up on the vibrations) and the same is converted into different forms as per needs.

The solar leaves function like plants and receive energy from nature. The device costs around $5 to make. She hopes her invention has the capability to provide electricity to the world in an environmentally friendly way.

She got the idea to develop cost-effective technology to produce energy during a visit to India where she saw villages in which people do not have access to affordable energy and water. Initially, her intention was to concentrate only on wind energy.

“This has been an amazing journey, and a great learning experience,” Mendu said in a blog post.

“Along the way, I have learned so much about the process of innovation. Innovation is more than just a light bulb moment, it’s rather a continuous expansion very much like our universe,” she said.

There were 10 finalists working for developing their innovative technology along with their mentors. She was mentored by Margaux Mitera, a senior product development engineer in 3M’s Stationery and Office Supplies Division.

The annual premier competition recognizes scientific thinking and imagination in students grades 5-8 who dream up a solution to an everyday problem that ultimately could reshape the way we live our lives.

“At 3M, we know the importance of encouraging ‘next-gen’ scientific thinkers, who will invent new ways to solve the issues our customers face every day — from keeping workers safe on the job to addressing global issues like access to clean water,” said Jon Lindekugel, senior vice president for Business Development and Marketing-Sales at 3M.