Documentary on climate change is directed by Fisher Stevens. 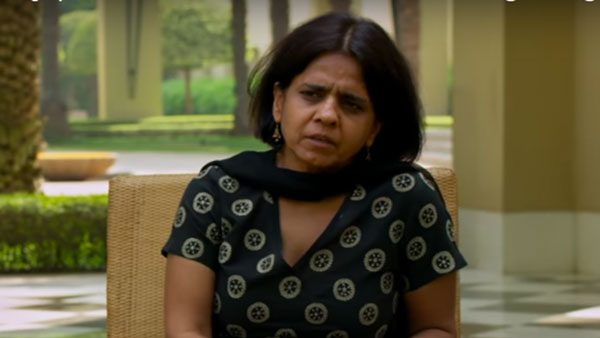 Sunita Narain, the Director General of Centre for Science and Environment (CSE), has been featured in the documentary Before the Flood that has Oscar winner Leonardo DiCaprio exploring the effect of climate change across the planet.

Before the Flood, directed by Fisher Stevens, is a documentary that records the three-year journey of DiCaprio, who’s also one of the co-producers. The documentary does a fact checking of the devastation caused by climate change and the ways through which humans can reverse the destruction caused to nature, to avoid a worldwide catastrophe.

She takes a dig at the US NGOs that frequently point finger at India’s consumption of fossil fuel saying “why they have to make the same mistake that we have made”.

Narain questions hypocrisy asking why despite knowing adversities caused by fossil fuel, the US has not adopted green energy.

She says: “If you (US) created the problem in the past we will create it in the future. We have 700 million households that cook using biomass. If those households move to coal, you have that much more usage of fossil fuel.”

Apologizing to DiCaprio first, Narain attacked the US saying: “Your consumption is going to really put a hole in the planet.”

Narain also shows a chart that substantiates her statement. According to the figures, one American consumes electricity that is equivalent to the electricity consumed by 34 Indians. The reason that she gives for this steep increase of energy consumption in the US is “you are building bigger, building more and using much more than before.” She also points out that there should be more discussions on the impact of lifestyle on climate change.

Narain says, “We need to put the issue of lifestyle and consumption at the center of climate negotiations.”

To this, DiCaprio says he is not going to argue with her as he is aware of the circumstance but says it is a very difficult argument to put before the Americans to change their lifestyle and the remedy is only on investing in green energy.

A defiant Narain, who can be seen shaking her head, asks DiCaprio, “Who will invest?” adding India is putting a lot of investment in solar energy and so is China but the US is no way near to it.

She nails her point asking, “What is the US doing that the rest of the world can learn from?” She names the US as a “fossil-addict” country. She goes on to says that if the US is ready to disengage from using the fossil fuel it is a strong point that can be put before the government, asking it to follow.

Before the screening of the documentary in London, DiCaprio said: “Before The Flood is the product of an incredible three-year journey that took place with my co-creator and director Fisher Stevens. We went to every corner of the globe to document the devastating impacts of climate change and questioned humanity’s ability to reverse what may be the most catastrophic problem mankind has ever faced. There was a lot to take on. All that we witnessed on this journey shows us that our world’s climate is incredibly interconnected and that it is at urgent breaking point.”

Watch Before the Flood – Full Movie