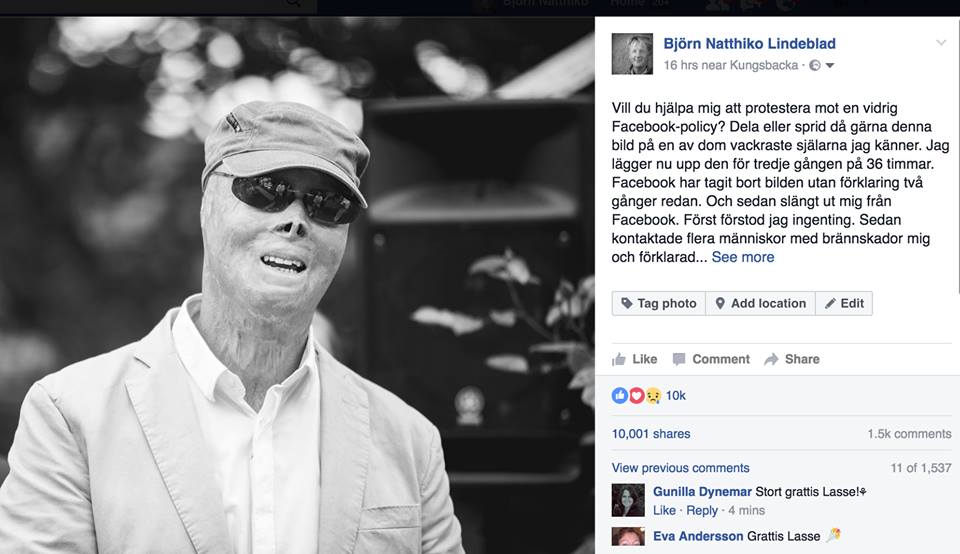 Over the last few years, Facebook has fought many battles against censorship and bans, but the company faced serious criticism when it removed a birthday photo of a former firefighter who suffered 3rd-degree burns during a firefighting mission while he was a young officer. Facebook later reinstated the photo considering the uproar.

According to reports, the picture of Lasse Gustavson, a Swedish former fireman whose face got disfigured in a blaze, was posted on Facebook by a friend to wish him on his 60th birthday. Soon, Facebook removed the image citing policy violation. He reposted the same photo but once again Facebook removed it, forcing him to report the problem.

According to Bjorn Lindeblad, he did a third posting criticizing the Facebook policy lapse, which was shared by over 10,000 people that opened the eyes of the social media network.

Gustavson, who’s bereft of ears, hair or eyebrows after the accident, told Sweden’s Aftonbladet newspaper: “It’s an offensive system Facebook has with this kind of censorship. You could call it a kind of racism.”

“When I was 24, I probably would have felt offended and upset that pictures of me were considered wrong and unpleasant,” he said. “It is a very volatile and sensitive time… but now I have lived so long with my burns,” he added.

According to Lindeblad, who works as a meditation teacher, he had no clue about why Facebook was removing the photo until he contacted other burn victims who also shared similar experiences of disgusting Facebook policy.

Lindeblad was quoted by Telegraph saying, “They said that actually this is a regular occurrence when burn victims post something where you can clearly see the burns.”

“A member of our team accidentally removed something you posted on Facebook. This was a mistake, and we sincerely apologise for this error. We’ve reinstated the content, and you should now be able to see it,” read the Facebook post.

Lindeblad’s post has since been shared more than 30,000 times.

Would you like to help me protest against a despicable Facebook policy? Then please share and spread this photo of one of the most beautiful souls I know. I´m now posting it on Facebook for the third time within 36 hours. Facebook has removed the photo twice already, with no explanation whatsoever. And then they expelled me from my Facebook account. At first, I was flabbergasted. Then several burn victims contacted me and explained that photos of burn victims are often classified in the same category as sexist and racist photos on Facebook. Oh dear. So let´s let Facebook know how we feel about this policy by spreading this photo far and wide!

The first time I posted this photo on Facebook, early Sunday morning, I enclosed these lines:

“Today is your 60th birthday, my friend. You´re enjoying yourselves royally in Southern Sweden, while I´m working hard on the West coast. And that’s completely OK. Because thanks to people like you, I can now do my work joyfully. You brought me light, when almost everything inside felt dark. You opened doors, that I assumed would remain closed forever. You call me, eerily often, just when I need to hear your voice and your wisdom. You tease the excessive seriousness out of me, when that’s whats needed. You’re living proof that wisdom and playfulness walk hand in hand. And you remind me, again and again, of so much of what’s beautiful about true manliness.