Kumar is the founder of the Republican Hindu Coalition.

Indian American businessman Shalabh Kumar, the President of Republican Hindu Coalition (RHC) and a close aide of President-elect Donald Trump, has been appointed to the Transition Finance and Inauguration Committee, of the incoming administration.

RHC, on Wednesday, announced that its founder and the current president Shalabh “Shalli” Kumar has been appointed to the prestigious committee.

Kumar in a statement said: “I am honored to accept these positions with the transition team and the inauguration committee.”

He added: “I am looking forward to rolling up my sleeves and working together with Steve (Mnuchin) and the other members of the Trump administration to Make America Great Again.”

Trump and Kumar had earlier shared the stage during a fundraising event in New Jersey. The hard work of Kumar in mobilizing Indian Americans, mostly Hindus, in favor of Trump during the election, seems to have finally paid off.

Steven Mnuchin, a banker who is Trump’s Treasury Secretary pick, and Kumar, were reportedly the brains behind the successful “Aab Ki Baar Trump Sarkar” campaign.

It was during the Humanity United Against Terror fundraising event, hosted by the RHC in New Jersey, that Trump made a famous speech in which he said: “I Love Hindus”.

A day before the election, Trump had met some Hindu community leaders in Orlando and also sent his daughter-in-law to a Hindu Temple in Virginia. 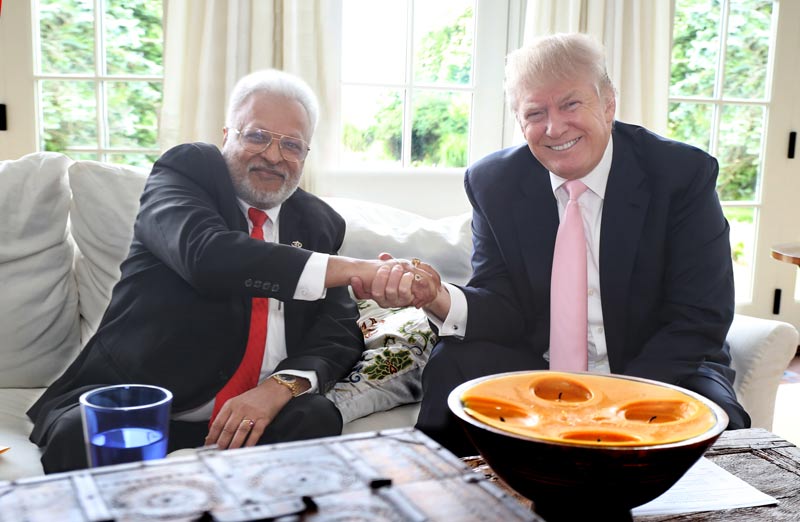 Kumar had donated $898,000 towards the Trump campaign.

The appointment of Kumar to the Transition Finance and Inauguration committee comes in the midst of Trump appointing two Indian Americans to key posts in his administration.

Gov. Nikki Haley was earlier appointed as the next US Ambassador to the United Nations; and Dr. Seema Verma was picked to be the Administrator of the Centers for Medicare and Medicaid Services.

Also, after a meeting with US Attorney for the Southern District of New York Preet Bharara, on Wednesday, Trump asked him to continue with his job in the new administration, which takes charge next month.