The film will be available on In Demand, iTunes, Amazon, Google Play, Xbox and Vimeo.

The digital version of SOLD, an award-winning feature film based on a best-selling novel by Patricia McCormick, will be released on January 10, the day before the Human Trafficking Awareness Day.

In addition to the full-length version which runs 90 minutes, a shorter PG-13 version of the film can be purchased or leased for screenings at schools, faith-based communities and corporations. This version runs 50 minutes, and is available through Roco Films.

January is marked as the Human Trafficking Awareness month by the United Nations.

The film tells the story of a 13-year-old-girl, who is trafficked from rural Nepal to a prison brothel in India in order to repay her family’s debts. Through the courage and resilience of the heroine, SOLD is a message of hope and a powerful call to action. 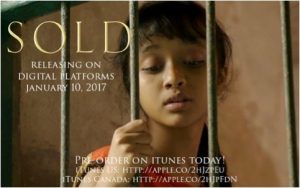 It is co-written and directed by Academy and Emmy award winner Jeffrey Brown and produced by Award Winning Impact producer Jane Charles.

The movie has won 5 Audience Awards and 2 Jury Awards at International Film Festivals.

“SOLD is on a mission to end child trafficking – a mission you can participate in by purchasing a digital download and bringing our film to your community,” Brown said.  “The more people who see SOLD, the more vulnerable children we will help.”

Since its release in 2014, the film’s creators have joined hands with the Taught Not Trafficked campaign to end child trafficking. According to the release, the campaign has raised funds to rebuild 85 classrooms in Nepal and helped fund Hope House and Project Udaan to stop second generation trafficking.

The film has partnered with a number of organizations, among them, Save the Children, World Vision, Art of Living Foundation, the UNODC, ECPAT, IOM, Childreach International, iRest Institute, Nest, Freedom United, United Way, Rotary International and Soroptimists.

Being an Indian American, ‘Sold’ was a very personal journey: Seirah Royin

The global average age of trafficked children is 13, the same age as the luminous girl who plays the lead, Lakshmi. “The International Labor Organization estimates that over 5.5 million children disappear every year into sex and labor slavery- more than at any other time in human history,” the press release said.

“This film will be a rallying point for our cause,” said Matt Friedman, the trafficking advisor on the film, who interviewed more than 300 women and girls trafficked between Nepal and India. “We, the counter trafficking world, have been waiting for this for a long time.”

Brown took his cast and crew into the red-light area of Sonagachi to experience firsthand what they were recreating. He and producer Charles arranged for the cast to meet survivors to hear their stories first hand.

The film was shot entirely on location only 15 blocks from the real red-light area of Songagachi, the largest red-light in the world.

“From its inception, SOLD was created to be used a tool for change and as the engine driving the TaughtNotTrafficked campaign,” said Brown. With the digital release it is now possible for everyone to bring the film to their community to raise awareness and funds to address this issue, he added.

Charles said, “It’s going to take all of us working together to end this and we hope our film SOLD will become a global rallying cry for audiences to engage. ”