All five represent the Democratic Party.

Tuesday was a historic day for the Indian American community as five Indian Americans took oath as members of US Congress – quintupling the size of its congressional delegation.

The five who took oath were the new senator from California Kamala Harris, Rep. Ami Bera of California, and newly minted representatives Raja Krishnamoorthi of Illinois, Pramila Jayapal of Washington, and Ro Khanna of California. All are Democrats.

Three of these five trace their roots to Chennai – Krishnamoorthi, Jayapal and Harris – one to Gujarat (Bera) and one to Delhi’s Nizamuddin area – Khanna. 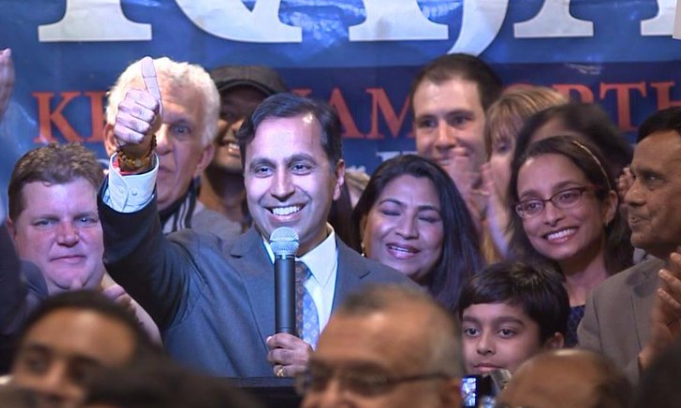 Prior to Tuesday, there were only four Indian American members of Congress, Dilip Singh Saund, Bobby Jindal and Bera.

Attorney-turned-businessman Krishnamoorthi was elected to the US House of Representatives by defeating Republican Peter DiCianni from Illinois’ 8th District.

Krishnamoorthi, who vied unsuccessfully for the seat the last time around, got the chance with two-term Democratic Rep. Tammy Duckworth vacating the seat for a successful Senate run against incumbent Republican Sen. Mark S. Kirk.

A staunch supporter of working families, Krishnamoorthi, in his campaign, hammered home the point that the middle class, upon which the democracy depends on, is shrinking.

The son of Tamil immigrants ran for Congress with a progressive mission statement that includes protecting Social Security and Medicare, passing common-sense gun laws, and addressing threat of climate change.

Born in New Delhi, Krishnamoorthi’s family moved to Buffalo, New York, when he was just three months old. After moving to Illinois, Krishnamoorthi attended public schools there. He earned a bachelor’s degree in mechanical engineering from Princeton University and received a Juris Doctor from Harvard Law School.

He served as a clerk for a federal judge in Chicago before serving as issues director for Barack Obama’s successful 2004 campaign for the U.S. Senate. He was appointed by Illinois Attorney General Lisa Madigan to serve as a Special Assistant Attorney General in her newly formed Public Integrity Unit to root out corruption. He subsequently served as Illinois Deputy Treasurer and as Vice-Chair of the Illinois Innovation Council.

He currently serves as the president of Chicago-based Sivananthan Labs and Episolar, Inc., which develop products for the national security and renewable energy industries, respectively. He also co-founded InSPIRE, a charity dedicated to providing solar technology training to inner-city students and veterans.

Krishnamoorthy entered politics in 2010 when he ran for the Democratic Party nomination for Illinois Comptroller. But, he lost the primary election to David E. Miller by less than 1% of the vote. In 2012, he lost a congressional primary bid to Duckworth.

Krishnamoorthi was on solid ground in this election, as he had received endorsements from President Obama, former Obama aide David Axelrod and the senior U.S. senator from Illinois Dick Durbin.

Krishnamoorthi lives in Schaumburg, Illinois with his wife, Priya, a physician who practices at a local hospital, and their three children —  two sons Vijay, 10; Vikram, 6; and a baby girl.

Born on September 21, 1965, in Chennai, and raised in Indonesia and Singapore, Jayapal moved to the United States in 1982 at the age of 16 to pursue higher studies.  She earned her bachelor’s degree from Georgetown University in Washington, D.C., and an MBA from Northwestern University in Chicago.

She started her political career through campaigns for the rights of immigrants, women, and workers. She led one of the largest voter registration efforts in Washington State, helping over 23,000 new Americans to register to vote.

Jayapal founded ‘Hate Free Zone’ after the September 11 attacks in 2001 as an advocacy group for Arab, Muslim, and South Asian Americans targeted in the wake of the attacks. The group went on to become a political force in the state of Washington, registering new American citizens to vote and lobbying lawmakers on immigration reform and related issues.

The organization changed its name to OneAmerica in 2008. Jayapal stepped down from leadership in the group in May 2012. A year later, she was recognized by the White House as a “Champion of Change” for her work on behalf of the immigrant community. Under the leadership of Jayapal, OneAmerica became the largest immigrant and refugee advocacy organization in Washington state.

Jayapal has served as co-director of We Belong Together – a campaign to mobilize women in support of common-sense immigration policies, Vice Chair of the Rights Working Group national coalition, on the Executive Committee of the Fair Immigration Reform Movement, and helped launch the National Partnership for New Americans.

In January 2016, Jayapal declared her candidacy for Congress in Washington’s 7th congressional district, after Congressman Jim McDermott announced his retirement. Earlier this year, Bernie Sanders endorsedJayapal saying she was “willing to continue the fight we started in this campaign.”

Jayapal lives in Seattle with her husband Steve Williamson, an officer and director of UFCW 21. Their son Janak is pursuing his studies at Wesleyan University. Pramila’s step-son, Michael, lives in Colorado.

Kamala Harris was born to the Indo-Jamaican parents who migrated to the US during the civil rights movement. Her mother Shyamala and father Donald earned their graduation degree from the University of California at Berkeley and soon become part of the movement. Young Harris grew up witnessing her parents raising slogans for justice. She and her sister Maya spent their childhood more with adults who were committed to community service.

Harris has often credited her drive for social service to have been inculcated by her 1st-grade teacher Mrs. Wilson who helped the women and children in the community to live in dignity.

Young Harris was attracted by the thoughts of Thurgood Marshall, Charles Hamilton Houston, and Constance Baker Motley – the architects of the Civil Rights Movement and decided to be a lawyer to uphold the interests of the voiceless, making sure that justice is delivered to them.

Harris got her undergraduate bachelor of arts degree from Howard University, and a law degree from the University of California, Hastings College of the Law. She began her career in the Alameda County District Attorney’s office and always wanted to be a prosecutor, to help the downtrodden – children, immigrants, women, the poor, people subject to hate crimes.

Harris also authored a book during this period titled “Smart on Crime”, providing an insight into the modernization in criminal justice and details about how to implement it in San Francisco.

As Attorney General of California, Harris created the Division of Recidivism Reduction and Re-entry at the California Department of Justice.  This was aimed at improving public safety by focusing on combating recidivism. She also created the Bureau of Children’s Justice to institutionalize my longstanding work of protecting children.

Ami Bera has equaled the record of Dalip Singh Saundh by getting elected for the third consecutive term.

Saundh was the first Indian American to be elected as the member of the US Congress 60 years ago. He went on to win two more terms.

Bera, the third Indian American elected to Congress after Saundh and former Louisiana Gov. Bobby Jindal, started his political run in 2012. He won a second term in 2014 and began his third term on Tuesday. Bera also co-chairs the India Caucus.

The Sacramento-area district was one of the most closely watched elections in the US since the boundaries were drawn in 2012 and each time Bera came out successful but only by a narrow margin.

“It’s been my honor to serve this community, first as a doctor and for these past four years as a member of Congress,” Bera said in a statement after winning.

After conceding defeat, Jones said in a statement that he was proud of his campaign.

“Although there were difficult aspects of the race, I do not regret running and am extremely proud of the campaign that we ran,” Jones said.

Bera’s father was sentenced to a year in prison in August for illegally funding his son’s campaign with close to $270,000, reported the Sacramento Bee. Even though Bera denied knowledge of his father’s activities, his opponent attacked him for allegedly involving in ‘corruption’.

Ro Khanna was born in 1975 in Philadelphia to Indian parents, who immigrated to the US seeking better opportunities and life for their children.

Khanna took student loans to complete his university studies, which according to him is still paying off today. He was a Phi Beta Kappa graduate in B.A. Economics from the University of Chicago and received a law degree. He also attended Yale Law School and received his law degree in 2001, with his specialization being intellectual property law.

President Barack Obama in 2009 appointed Khanna as the Deputy Assistant Secretary at the Department of Commerce. He has been a proponent of clean technology trade mission, expanding the Green Embassy program, giving an opportunity to US green energy companies to display their products in embassies abroad.

Khanna was also involved in the White House Business Council, maintaining a close relationship between both business and labor in an effort to bring back American manufacturing jobs. American exports grew and Ro received a letter of commendation from Frank Sanchez, Under Secretary for International Trade, for his services.

Khanna says he was deeply influenced by the stories of Mahatma Gandhi told to him by his grandfather and this cemented his commitment to public.

After his studies, Khanna became an active politician and his first political campaign was for a lesser known state Senate candidate Barak Obama

President George W. Bush’s 2003 decision to attack Iraq was vehemently opposed by Khanna who also conducted protest campaign against a Democratic who voted for Bush in the Congress.

Khanna defeated the incumbent and fellow Democrat Mike Honda, who had defeated him in the 2014 election in California’s 17th District.