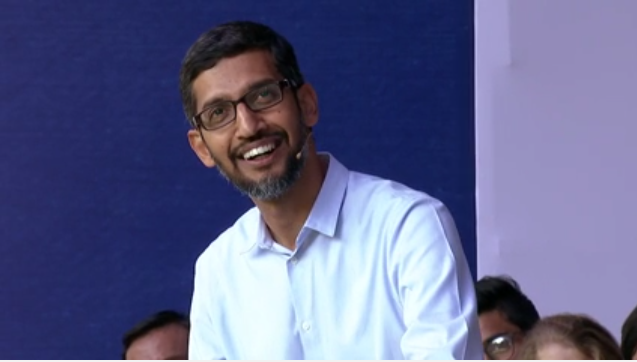 Google CEO Sundar Pichai,  who is in India on a work and personal visit, on Thursday visited his alma-mater IIT Kharagpur in West Bengal and interacted with students.

During the interactive session held with over 3500 students in the amphitheater of the campus, Pichai talked everything from learning Hindi to meeting his wife Anjali.  He said, “It is great to be back here”.

The event #BackOnCampus was also live streamed by official channels of Google India.

Pichai, who seemed to be overwhelmed, being on campus after 23 years, told students that he was not a very proficient Hindi speaker because of his Tamil background.

“I didn’t know Hindi too well when I came here from Chennai. I thought “abbey saale!” was a way to call out to people. I learnt Hindi in college,” Pichai said.

Pichai also shared his experience meeting his wife, Anjali, on campus and recalled how difficult it was to call girls from their hostels when there were no smart phones.

“I met Anjali at IIT-KGP and she was my classmate. Just to go get someone at the girl’s hostel, you had to walk in the front and request someone to call them. And they’d go in loudly say – Anjali, Sundar is here. It wasn’t exactly a pleasant experience,” he said.

Pichai told to students that he looked at the first computer in the campus as he didn’t have access to computer at home.

“I remember waiting for a long time to get a rotary phone at home. Didn’t have access to computers growing up. Clearly the progress has been phenomenal,” Pichai added.

In a rapid fire round, he was asked about his GPA at IIT, to which he replied that he was embarrassed to admit his GPA after the first year, but did really good for the next three years to make up for it.

When asked about the next big thing at Google, he said, “I can’t quite tell exactly but advances in AI and machine learning, we are making a big bet on that. Advances in machine learning will bring a difference in many many fields.”

Sundar Pichai studied metallurgical engineering at IIT Kharagpur and graduated in 1993, after which he went to the US to study Material Sciences and Engineering at Stanford. The Madurai-born tech giant CEO also holds an MBA from the Wharton School of Business.

Pichai’s IIT Kharagpur address follows a speech in Delhi, where he announced the Digital Unlocked initiative to bring online the small and medium business in India.