140 incident of hate violence and 67 instances of xenophobic political rhetoric documented; 1 one in 5 of xenophobic statements came from Trump. 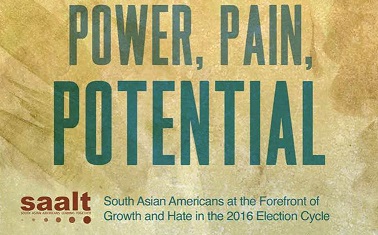 South Asians in the United States experienced a spike in hate violence and rhetoric during the 2016 presidential election similar to levels seen the year following the September 11, 2001, attacks,  a report released by South Asian Americans Leading Together (SAALT) on Wednesday said.

This is a 34% increase in less than a third of the time covered in SAALT’s 2014 report, “Under Suspicion, Under Attack”. This breaks down further into 140 incident of hate violence and 67 instances of xenophobic political rhetoric of which 196 or an astounding 95% were motivated by anti-Muslim sentiment.

“I think that the spike in hate violence really quantifies the level of suspicion and mistrust that many of our community members continue to experience, feel and see on a daily basis,” PTI quoted Suman Raghunathan, executive director of SAALT.

“What we are all aware of is that the increasing lack of trust that South Asians and Arab communities have, with respect to law enforcement, is real and has a significant impact on community members’ willingness and comfort level to come forward if they’re the victim or might be a victim of hate crime or violence,” Reghunathan said.

According to the report, approximately one in five of the documented xenophobic statements came from President-elect Donald Trump and the wave of violence back lash and scapegoating aimed at the South Asian communities became strong after the attacks in San Bernardino and Paris in November and December 2015 respectively.

The report also found that the division inside the community became exposed as candidates capitalized on largely anti-Muslim rhetoric and policy proposals in an effort to win over non-Muslim South Asians. It also points to the fact that since 2000, unauthorized immigration from Asia has grown at rates much faster than from Mexico.

India is the country of origin with the greatest increase in unauthorised immigrants to the US with a 914 per cent increase since 1990, the report said.

SAALT proposes several solutions in response to hate violence and rhetoric against South Asian communities, such as investing in youth leadership, increasing voter engagement, boosting civic engagement in communities of color, and promoting political education. The report further suggests that, the elected officials should take steps to establish “hate-free zones,” pass anti-racial profiling legislation, and maintain the infrastructure to improve the reporting of hate violence.