Columnist Hamza Khan was among the hundreds of thousands who marched in Washington on Saturday.

In a speech to the CIA today, President Trump said the inaugural crowd “looked like a million and a half people.”

WASHINGTON, DC: Millions across the globe marched Saturday in unity against Friday’s anointment of Donald J. Trump as “Bully-in-Chief,” one of the most pathetic caricatures to ever emerge from “reality television”. In Washington DC, conservative estimates are pointing to at least double the number of attendees at Saturday’s march than at now President Trump’s inauguration.

Organizers estimate 500,000 attended the Women’s March in Washington D.C. Barely half that number bothered to attend Friday’s inauguration of Trump, with public transit officials and local businesses saying that attendance was lighter than even a decade ago when the last Republican, George W. Bush, was sworn in.

The Women’s March is the beginning of a movement of Americans to reject the hateful and vile rhetoric against women (and many, many others) that the nation and the world has been subjected to by President Trump. Americans from every walk of life, regardless of age, party, race and gender, have delivered a vision of hope and resistance that will likely infuriate Republican lawmakers and policymakers as they begin their 100 days of mayhem to upend the legacy of now-former President Barack Obama.

Maryland Congressman Jamie Raskin rallied well over 1,000 people to march with him from his district and beyond in Washington.

Saturday’s march in Washington spoke to the radical realization by Americans of all stripes that women’s rights are human rights. The misogyny embraced by the slim majority of voters in the rustbelt states that electorally chose Trump to be the 45th president is not shared by the vast majority of Americans. This was made evident by the sheer number of coordinated marches across the country demonstrating as much for solidarity with women as against the unabashed sexism of Donald Trump. Some 1,500 protesters even marched in Fairbanks, Alaska, where temperatures reached a high of minus 15 degree in blizzard conditions.

Women marched globally on Saturday. Below is a map showing the locations of North American Marches. 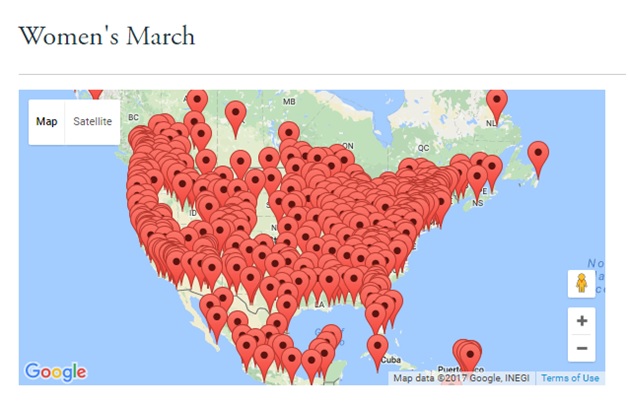 Photo tweeted by a Los Angeles Times reporter of crowds boarding the Shady Grove Metro stop in suburban Maryland. Shady Grove is the last stop on the DC-region subway line.

The march speaks to the vibrancy of America’s democracy, even when it is under direct assault by the most unpopular candidate in history to win the Oval Office.  All of America has risen up in a thunderous voice of unison. Our lives and bodies are sacrosanct, and we will not allow women to perish for the vanity of men any longer. Trump’s statements and treatment particularly of women predicated organizing the march, but the march and its sister marches in cities across not only the United States but the globe (including one in Antarctica) has come to mean something even greater. Saturday’s march was a moral rebuke of the man whom America’s Christian Right anointed to be their messiah. Millions rallied across the country to combat the bigotry, Islamophobia, misogyny and hate violence that has become the calling card of the Republican Party’s newly minted rule in Washington, D.C.

Side by side comparison by the New York Times of crowd-size showing Friday’s scant inauguration attendance in sharp contrast to the overflow crowds on Saturday marching in solidarity for women’s rights.

The multitudes that chose to be in Washington on Saturday hailed from across the country. Groups of Americans from as far as Alaska and Puerto Rico flew in to take part in the march. The march was co-organized by a network of activists stretching from Teresa Shook in Hawaii to three New York-based activists: Tamika Mallory, a gun control advocate; Carmen Perez, head of the Gathering for Justice, a criminal-justice reform group; and Linda Sarsour, a Muslim American superstar known for her grassroots advocacy work in New York City, as well as her citizenship trainings nationwide on behalf of the Sanders campaign. The diversity shown through to streets on Saturday where men, women and children of all backgrounds marched together both to rebuke Trump’s ongoing assault on civil liberties, especially the unresolved allegations of sexual assault made against him by over a dozen women. Four of those women were marching in Washington on Saturday.

President Trump is disputing how many people attended his inauguration. We had experts assess the crowd size. https://t.co/B5olahGgQc pic.twitter.com/5fFWJHJ3Jd

Yet, if anyone assumed Donald Trump would be humbled by his global shaming less than one full day since assuming the office of the presidency, they were wrong. Trump spent his first day on the job denigrating the free press, and threatening members of the media with retribution. Sean Spicer, the White House press secretary launched into a diatribe on Saturday, reading from a prepared statement that the news media was deliberately misrepresenting the crowd sizes to undermine the new administration. Spicer closed with a startling threat for news journalists: they and their bosses in news rooms would be held accountable going forward for not toeing the President’s line on matters of news. Clearly, Mr. Trump and his merry gang missed their high school civics lesson: freedom of the press is sacrosanct, and not subject to punitive measures by government – it’s called the first amendment.

As if seeking to add insult to injury to the prestige of the United States, Donald Trump himself earned bipartisan condemnation for grandstanding at CIA headquarters later Saturday by choosing again re-hash his inauguration’s crowd size and his patently false claims of how many people attended, all while standing in front of the memorial wall dedicated to clandestine agents who have fallen in the line of duty. Trump only spoke at the CIA for 15 minutes, yet nearly 11 minutes of his speech were spent lambasting the news media for miscalculating the number of people at his inauguration.

John Brennan, a day after his retirement as Director of National Intelligence released the following statement upon learning of Trump’s behavior at Langley:

Brennan served both under President Obama and President Bush. His was not the only voice to heap ill-praise on the new administration on day one. President Bush’s longtime press aide, Ari Fleischer, tweeted earlier on Saturday that White House Press Secretary Sean Spicer’s threatening press briefing was an example of “a statement you’re told to make by the President. And you know the President is watching.”

Trump’s thin skin in dealing with what he perceives as criticism of his fledgling administration threatens to send the government of the country charged with leading the free world into a tailspin. “The kinds of things [Trump] is saying being heard around the world, and our allies are reacting [unfavorably],” said Lt. General Mark Hertling late on Saturday. Even Trump’s most avowed public defenders, former Regan acolyte Jeffrey Lord stood no chance on CNN as guest after guest pilloried the new president for his lack of maturity—a hallmark of his candidacy in 2016. Lord eventually admitted he was heartened and inspired by the Women’s March, providing no comment about the Donald’s inauguration.

Probably the greatest male heroes on Saturday were Maryland’s U.S. Senator Chris Van Hollen and U.S. Representative Jamie Raskin (D-08). Raskin organized a massive grassroots activist militia to march alongside him in Washington D.C. Raskin led activists in chants and songs, and delivered an audacious speech of hope and resistance to Trump’s administration, which is already considered illegitimate by most Americans. “We are a nation of all peoples, regardless of religion, regardless of background, regardless of who you love,” said Van Hollen, speaking at an AME church in downtown Washington. Both Van Hollen and Raskin have been vaunted as the likely leaders of congressional resistance on a wide variety of fronts to the extremist Republican agenda being put forward in the new Congress.

Hope & change will not die if we organize

But the revolution will not be televised. Americans must act beyond marching in the streets one Saturday every four years, and re-engage our democracy at its most basic level: the local ballot box.  Democracy is a long term project, President Obama has told us again and again. For us to make sure that the dream of an equitable, just and greater America will not die we must work well into the new year to organize the coalitions of activists, voters and direct action that will be necessary to resist the GOP’s reactionary agenda to drag America kicking and screaming into the 1950s.

Americans can never again be complacent that our institutions will survive the maelstrom of hate and base populism favored by those desperate for power. As Trump sycophant Jeffrey Lang correctly pointed out last night on CNN: during Reagan’s administration, there were huge rallies and protests staged against many of that president’s debilitating public policy decisions; yet they only worked to heighten the appeal of Reagan to his base which had voted him in to make exactly those choices. Our freedoms and the wellbeing of all Americans hangs on a thread largely because of the rise of social media-based #slacktivism. If we are serious about ending his ignominious rule before it even begins, then we are going to have to work day in and day out to take back governor’s mansions and state legislatures nationwide through coalition building, grassroots advocacy around issues, and finally voting early and voting often in every election we are qualified to do so.

Trump’s rise is an indictment of all of us who assumed that we could, without slight inconvenience to our lives, actively oppose his candidacy in the streets, at the ballot box and in the press, by leaving democracy “to the professionals” who manage campaigns and participate in our elections as staffers and organizers. Saturday’s Women’s Marches are the merely the beginning of our reawakening as a sovereign people. Let us not only march, but run towards defending our democracy starting now.

(Hamza Khan is a political activist and consultant based in Maryland. He has advised congressional and senatorial candidates on outreach to minority voters, and has spoken widely to the international press about the US presidential elections. He is a columnist for The American Bazaar. You can follow him on Twitter: @HamzaSKhan)