Follow @ambazaarmag
Ambassador Navtej Sarna paid floral tribute to the statue of Mahatma Gandhi in front of the embassy. 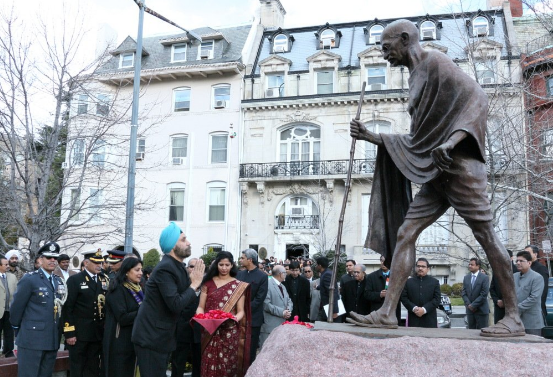 Indian Ambassador to the United States Navtej Sarna led India’s 68th Republic Day celebrations across the country, unfurling the tricolor in the presence of a large number of Indian Americans at the Indian Embassy in Washington DC.

Sarna, who paid floral tribute to the statue of Mahatma Gandhi in front of the embassy, addressed the gathering and also read out the address President Pranab Mukherjee made on the eve of the Republic Day.

In his address, Sarna highlighted India’s development and US-India relationship. His address was followed by singing of patriotic songs by young children.

Documentaries titled A Day in the Life of India’ and Indian Army: An Instrument of National Power’ were screened on the occasion.

Similar Republic Day celebrations were held at other diplomatic missions in New York, Chicago, Houston, Atlanta, San Francisco and the Permanent Mission of India to the UN.

Indian Ambassador to the UN Syed Akbaruddin unfurled the national flag at the Permanent Mission of India in New York.

In the California state Assembly, Assemblyman Ash Kalra celebrated the day with community members and other lawmakers.

Rep. Pete Olson also joined the celebrations. In a statement, he said that it marks important day that India adopted their Constitution as their governing document – they day India officially became a republic.

“Today celebrates both India becoming a republic and it signifies the special bond between the world’s oldest and largest democracies. This bond encompasses shared values, commercial trade and mutual security,” PTI quoted Olson.