A new report examines the CSR and philanthropy landscape in India today.

India is now three years into one of the world’s most interesting experiments to promote private philanthropy – the CSR requirement in the 2013 Companies Act.  Just as the Indian government pushes inclusive demonetization to reduce corruption and technology access for all Indians, it is pushing India’s corporate sector to provide the seed capital and philanthropy for solutions to India’s most challenging problems in education, health care, the environment and skills development.

India has some of the largest problems in the world. It has developing country problems, with millions suffering annually from malaria, malnutrition and anemia. Nearly 400 million Indians do not receive the education they deserve. But India also suffers from the problems of the affluent – a result of its fast-growing economy and large middle class. This group drives cars that pollute the environment, suffers from cholesterol and heart disease from a high-fat diet, and lacks the professional skills for the global economy. To solve these problems, India cannot rely on government alone.   It must identify new, scalable ideas with grants from the private sector.

Worldwide, philanthropy is the private engine that launches new ideas, build civil society organizations and provides proof of concept for transformative solutions. The Indian government, a much larger parallel engine of change in India, hopes the philanthropic sector eventually brings a steady stream of such ideas and organizations to its doorstep for scale up and impact across India.

Based on the first three years of this legal requirement, many in India’s NGO sector don’t see this happening.  They see a sector that is still in the early stages of getting organized. They are confused by the lack of strategic planning, innovation, experimentation or engaged participation by CSR departments for India’s development.  Many NGO leaders chalk this up to the “newness” of philanthropy.  Corporate social responsibility is a relatively new concept in India, and many Indian companies have often practiced philanthropy without calling it so.  Corporates have often provided housing and subsidized living to their employees and communities, and they often keep thousands of unproductive or unnecessary employees on corporate rolls to prop up the communities in which they are based. 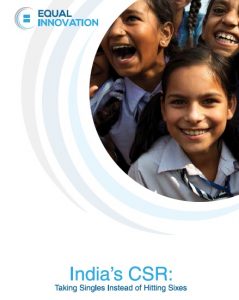 A new report, “India’s CSR: Taking Singles Instead of Hitting Sixers,” provides an analysis of CSR and philanthropy in India today. While many in the media and philanthropic sector have commented about India’s CSR spending requirement, there has been very little constructive reaction and feedback from NGO’s working in India – the very organizations receiving CSR funds.  In interviews with 39 leaders of the world’s largest NGO’s working in India, the following three recommendations were repeatedly espoused as necessary for CSR spending to have any impact on Indian society.

Over the next decade, there are two major global treaties that India’s CSR community will be partially judged by. The first is the United National Climate Change Agreement, or COP 21, which ties India to global climate change reduction goals.  And without any guarantees of support from the West, the CSR sector will provide critical grants to experiment with new solutions in the areas of cleantech, conservation and behavior change. If the governments of the West don’t promote tech transfer, it will be corporates that must push for it.  In addition, India has committed to the United Nations Sustainable Development Goals (SDG’s), which ambitiously target the elimination of global poverty and the advent of sustainability by 2030. Indian CSR and philanthropic organizations must aggressively benchmark its activities to the SDG as a means of informing policy makers.

The next decade will be very exciting for Indian philanthropy.  The combination of mature grant-makers, a robust economy, new technology platforms means give India’s civil society and philanthropic sector new hope to address major challenges that had previously been viewed as too big to impact.