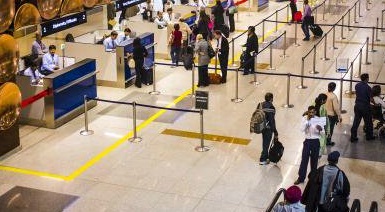 Visitors from India have been ranked as seventh among foreign spenders in the United States according to Brand USA survey.

According to marketing company’s data of 2015, India ranks 11th in terms of source market for tourists to the US. But when it comes to the ‘spend’ category, Indian’s rank higher with 8th position.

According to the report, international visitors spent $246 billion in the US and the share of Indian visitors is $11.8 billion. Indians also opt for long stays with average traveler spending 35 days there on a trip in 2015.

Thompson assured that the extreme checks in the airports will not affect Indian tourists.

“Nothing about ability to get a visa, or enter has really changed. There have been no policy changes yet. A lot of things have been said but nothing has changed. We have a great history of very strong relationship with our friends and visitors from India. That is not going to change at all,” he said.

Brand USA economics report finds that there was a 17% rise in visitors from India to the US and 8% increase in spend by them in 2015. The average spend by all foreign visitors was $4,400-4500.

“The US department of Commerce projects that Indian visitors will rise on an average by 9-10% over the next five years. India is one of our most important source markets in terms of economic impact. We see India as a major contributor to tourism,” Thompson told the Times of India.

“The interesting thing about India is that its population is getting younger. Our ability to capture attention at a young age and nurture that over most of their adult life will help us in future. We are looking at improvement in entry and visa policy. We will make it easier for people to travel between the two countries,” he added.