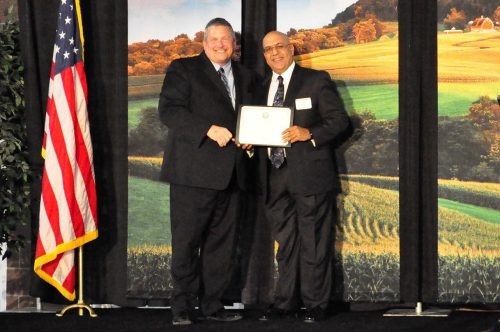 The award for “Outstanding Service in Agriculture” was presented at Iowa Agricultural Leaders Dinner last week.

Sehgal Foundation, based in Des Moines, Iowa, has won the fifth annual Iowa Secretary of Agriculture Leader Award for Outstanding Service in Agriculture.

Jay Sehgal, a trustee of the foundation, received award on behalf of the organization from Iowa Secretary of Agriculture Bill Northey at the Iowa Agricultural Leaders Dinner on the Iowa State Fairgrounds in Des Moines on March 7, according to a press release.

The Agriculture Leader Awards were created by Northey with the goal of honoring and celebrating Iowa citizens, companies, and organizations that have contributed to Iowa’s agriculture industry in leadership roles in innovation, conservation, service, and collaboration.

Jay Sehgal credited the foundation’s many agriculture partnerships for receiving the award — especially the collaborative work with Mosaic Fertilizer Company and Mosaic Foundation.

With strong partnerships, Sehgal Foundation teams in India and Iowa continue to design and promote rural development interventions that create opportunities, build resilience, and provide solutions to some of the most pressing challenges in India’s poorest communities, he said in the press release.

Sehgal pointed out the foundation was able to build connect Iowa and India. He termed Northey “a longtime friend” of the foundation, who has visited Sehgal Foundation in Gurgaon, India, and met with representatives from India when they visit Iowa.

All four winners were honored for their progress, innovative solutions, commitment to serving our communities through collaboration and hard work, and because they epitomize the values of Iowa agriculture that make the state a national and global leader, the release said.