“One day I want to make a Rush Hour sequel in India with SRK in it,” said Ratner. 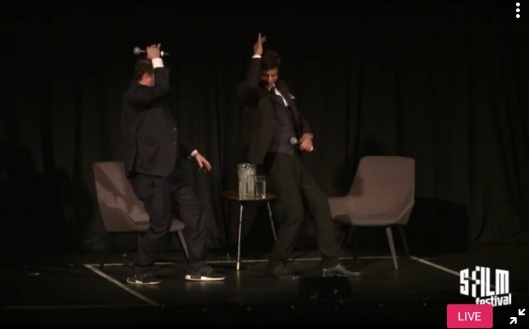 Bollywood superstar Shah Rukh Khan donned the role of a trainer when he taught Hollywood producer/director Brett Ratner his signature Lungi Dance. In return, it seems like Ratner might give King Khan a lead role in the sequel of Rush Hour as a guru dakshna.

Both Khan and Ratner shared the stage of San Francisco Film Festival (SFILM) on April 15. The event was streamed live on the Twitter handle of SFILM.

The special onstage appearance of King of Bollywood was part of the celebrations of the 60th San Francisco International Film Festival.

“It is a great honor to welcome one of the world’s most recognized film personalities,” said SFFILM’s Executive Director Noah Cowan.

“Above Shah Rukh Khan’s fame as an actor is a man known for his pervasive curiosity about the world around him, about technology, about our collective future.

“Khan is among the most engaging figures in any field and this night, in conversation with Hollywood wizard Brett Ratner, will be among the most memorable of this year’s Festival events,” Cowan added.

The moderated discussion led by powerhouse director-producer Brett Ratner was followed by a screening of Shah Rukh Khan’sMy Name Is Khan (2010), the highest-grossing Bollywood film in North America. The previous record was set in 2007 by the film Om Shanti Om that also featured Khan in the lead role.

While moderating the session, Ratner, who is the director of Rush Hour series, X-Men: The Last Stand and the most acclaimedThe Revenant, said that he has plans to come up with the sequel of Rush Hour in India with Shah Rukh Khan in the main role.

“One day I want to make a Rush Hour sequel in India with SRK in it,” said Ratner.

The audience packed evening at the Castro Theatre was enthralled by the conversation of the two stars. Before the beginning of the engaging discussion, Ratner posted a selfie of him with Khan, which he captioned, “With the King of Bollywood – SRK – Getting ready for our conversation at SFFILM.”

In the course of their discussion, Khan taught Ratner a few steps of his famous Lungi Dance from the movie Chennai Expressand also took the mic to sing the tune as the audio of the song was unavailable.

“With King Khan doing the Lungi dance during the SFFILM. Inspiring, humble, a great dancer, and smells great too,” Ratner captioned the video.

“Thanx Brett Ratner for a great evening at the SFFILM, your doll is awesome like you,” Khan tweeted with an image where he is seen holding up the doll.

“You made me feel special and all who came to attend. Love you and hugs,” he tweeted.

Khan was the first Indian citizen to be honored by the United Nations Educational, Scientific, and Cultural Organization with a special award—the Pyramide con Marni—for his charitable and social commitment towards providing education for children.