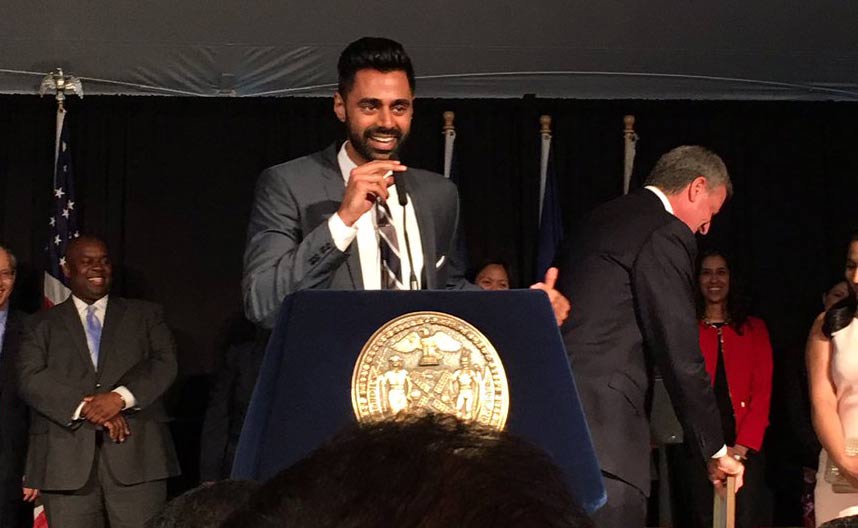 Hasan Minhaj, the Indian American standup comedian and actor was honored by Bill de Blasio, the Mayor of New York City at his official residence on Wednesday during the Asian-Pacific American Heritage reception.

The standup comedian who was the first Indian American to be chosen to perform at the 2017 White House Correspondents’ Dinner was presented by Blasio with a proclamation that declared May 10, 2017 in the city as ‘Hasan Minhaj Day’.

“I, Bill de Blasio, Mayor of the city New York proclaim Wednesday, May 10, 2017, in the city of New York as Hasan Minhaj day,” announced the mayor.

In his speech, the Blasio slammed the idea of racial inequality and criticized the offences against immigrants that are creeping in the society in the recent days.

Introducing Minhaj to stage, the mayor said, “Our honorary this evening stands up for these values using one of the most powerful weapons, that is the weapon of humor and satire.”

“He (Minhaj) uses his humor to shine a light on injustice and racism and bias in a very powerful and effective way,” added Blasio.

It's our job as New Yorkers to stand up whenever someone is unfairly vilified. We'll never let acts of hatred and bigotry go unanswered. https://t.co/ntdty4g052

Minaj, accompanied by his wife, received the award and described the honor as “unbelievable.”

The proclamation, that depicts the story of what Minhaj’s previous achievements, ends with the declaration of the day as “His Day”. “It is a huge honor to get this” the gladdened comedian said.

Although Minhaj’s speech was loaded with fun, it concluded with his vow to fight for the “immigrant narrative”.

The proud New Yorker said, “No matter how you dress, no matter what language you speak, you are the part of the club immediately and I couldn’t be more proud of being a New Yorker. I know there are countries dealing with two different narratives, it’s the nativist or the immigrant narrative, I am fighting for the immigrant narrative where regardless of creed, colour, class, sexuality, gender, this (New York) is the meritocracy and the great place for ideas to rise to the top. If you have a great idea based on merit, this is the great market place for ideas and I am going to continue fighting for that”