The Maryland state delegate, who is running from Maryland’s 6th congressional district, speaks to The American Bazaar. 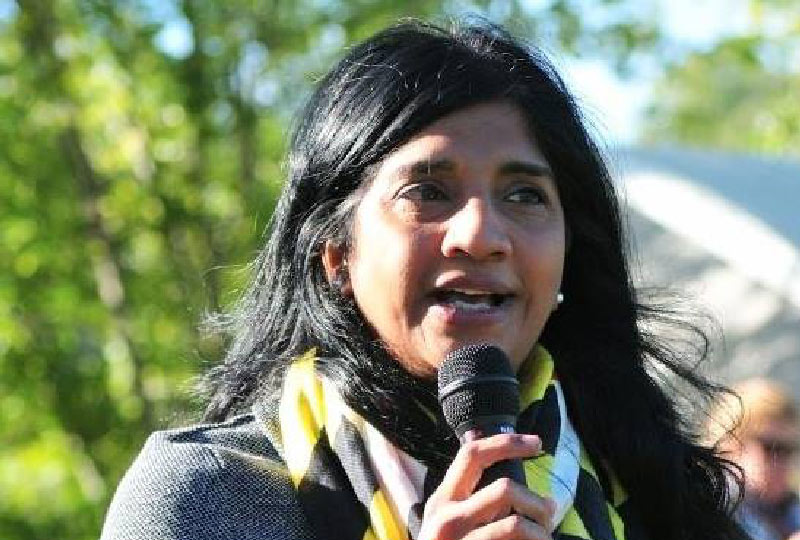 Earlier this month, Maryland Del. Aruna Miller, took the first step toward a congressional run from Maryland’s 6th district when she filed papers with the Federal Election Commission. The Indian-born Democrat was one of the first candidates to announce the candidacy for the seat, which is currently held by Rep. John Delaney, who is preparing for a run for a higher office — possibly for governor.

Miller, who came to the United States at age 7, has been in the Maryland House of Delegates since 2011, representing the 15th legislative district. In the statehouse, she has distinguished herself as a lawmaker, having been a member of the Ways & Means Committee and its various subcommittees. A civil engineer by profession, the issues she has focused include women’s rights, children’s safety, environmental protection and transportation.

Miller, a mother of three girls — Meena, Chloe and Sasha — takes pride in being a successful working mother who understands the challenges women face while juggling work and home, simultaneously.

In a freewheeling interview with The American Bazaar, Miller, 52, shares her thoughts on the her candidacy and other issues.

You seem to have decided to run for Congress. What has prompted you to run?

The 6th district is probably is one of the most competitive districts in the state of Maryland. Currently we have a Democrat — that is Congressman [John] Delaney — representing the district. Sometime in June, he is going to make a decision on what his future plans are. I had a personal conversation with him and he told me that he is leaning in the direction of not seeking re-election for the seat. What his plans are, I am not sure — whether he is going to run for governor, or he has got other plans. We will know for sure by the end of June or July 2017. Should he decides not to run, I am running for the seat because of several reasons:

Number one, I want to make sure that it remains a Democratic seat as this is very important for the state of Maryland and the people of Maryland. Number two, I have resided in the 6th district for over 14 years. I raised my family here. My daughters all went to public schools here, I worked here as well. Number three, I spent a majority of my career as a public servant here, helping the people of Montgomery as a transportation engineer. And number four, I am a working mom. I know what it’s like to balance work to raise children, to care for aging parents, and these are the struggles that the people of the 6th district face. I am no different than the average 6th district resident. And in my role as a member of Congress, I will be in a position to work putting in place policies that help working family.

In your opinion what is the biggest issue for the voters of the 6th district?

I think the biggest issue for all is — number one — jobs. The 6th district goes all the way from Potomac in Montgomery County, all the way to the western panhandle on Maryland. It has Montgomery County, Frederick City, Frederick County, Allegheny County, Garrett County, and Washington County. Whether you go from an urban area to a rural area, an individual’s ability to have access to jobs is one of the greatest liberating things that a person can have and a family can have. So jobs and economy, I think, is the number one issue.

Infrastructure is another big issue for the residents of 6th district. We need to improve our infrastructure, particularly expanding and improving highways, and investing in transit improvements to make sure that the residents can get to their employment centers, get to schools, places of worship, shopping and healthcare. We have our residents stuck in traffic congestion, and so much time and quality of life is wasted just sitting in traffic congestion. That’s a problem.

And one of the main corridors that goes through the 6th district is I-270 — Interstate 270.  Employers are worried that their employees are going to get stuck in traffic and not be able to get to work in a timely manner. Then there is the issue of environment… putting all the emission out there while sitting on a parking lot on I-270. Transportation is a huge thing that is part of the economy.

Improving I-270 is one issue that I would like to focus on because it has been studied since 1994 with no improvement to be seen yet. And that’s an area that I like to focus on. I’ve been trying at the state level to do this. If I am elected the 6th district Congresswoman, I hope to continue the fight to ensure funding to make transportation improvements.

I also want to focus on policies that help working families. We no longer live in an era where there is only one bread winner, and that’s the male. In the 21st century, we have dual income families, and that means we need to take look at the labor policies. We have to help working families. They have to be able to take care of families and balance work. That includes paid parental leave for both the father and mother, making sure that the best childcare is available to our families. And that includes making sure that we have a first-rate public education system in the state of Maryland. Another issue that is very important to the residents is making sure college is affordable.

You’ll be running against some well-funded candidates. What do you think are some of the challenges that you are likely to face?

Of course, in any election there’re always challenges and good candidates that you have to run against, and that’s part of it. My focus is going to be that I’m here to represent the people of 6th district. So far, based on the information that I know of the candidates that are running, none lives in the 6th district. I am the only one [among other potential candidates] who has lived here and raised the family here. I work here, and I have represented a section of  people within the 6th district [as Maryland state delegate]. I need to run my campaign on the needs of the people and not worry about who my opponents are, and how much money they have. My focus is to see what I can do for the people of the 6th district.

Now the next election is likely to be a referendum on Trump. How will you position yourself in that scenario?

I totally agree with you that 2018 will be a referendum on Donald Trump. So on that note, I think Democrats have to work really hard to make sure that we take this opportunity to elect Democrats from the federal level, all the way down to the local level.

So, we have a lot of things going on. We’ll be electing our congressmen throughout the entire state in November 2018. The 6thdistrict — out of the eight districts we have, the 6th district is the most competitive in the state of Maryland, with the exception of District 1, which is represented by Congressman Andy Harris, who is a Republican. The 6th district, although it definitely leans Democratic, is still a competitive district when compared to the other Democratic districts in the state of Maryland. So, it’ll be competitive. Then you have, at the state level, a governor’s race, assembly races, and at the local level, you have county executives’ and councilmen’s races. So, I think it’s important that in 2018, Democrats not lose their focus and continue to work hard at the grassroots level to make sure that Democrats get elected.

And why should they get elected? Because we represent the values and the goals of the people of the state of Maryland. In the past, we lost the messaging [war] and failed explain to people why we are the party that represent the families trying to get ahead, working for them to get jobs, education and healthcare.

Tell us about your background. Your parents came from India…

My father came to the United States in the 1960s, during a time this country was exploring space. It was looking for scientists and engineers to be able to work on the space efforts with NASA. My father, a mechanical engineer, left everything and came here, as most immigrants do when they leave their native country. He left his young wife, their three children and his family and friends to come to the United States.

Basically, he was willing to sacrifice who he was for what he was about to become. Because America offered him opportunities and dreams. And one by one, my father brought each of us to the United States. I was the last to arrive; I was seven years old when I came here in 1972. I lived for a while in Poughkeepsie, New York. Then my family moved to St. Louis, Missouri. So I grew up in the Midwest. I went to public school there, along with my siblings. My father emphasized the importance of studying hard and working hard. America is a place where our dreams can come true, like no other country in the world. And that’s what he always instilled in us. I went to engineering school [Missouri University]. I’m a civil engineer — a transportation engineer.

I married my college sweetheart and we moved to Maryland, back in 1990s, to Montgomery County. This is where we raised our family. We have three daughters. Two of them have graduated and they are working in New York City. And my youngest is in [University of Maryland] College Park, a freshman.

I feel my country has given me so many opportunities, like many immigrants feel. And I can think of no better way to give back to my country than to do public service. That’s why I spent my career, working for a local government as a transportation engineer. And that’s why I ran for Maryland state delegate in 2010 to be able to give back to the citizens of my country, to the residents that live in the state of Maryland. So many people, prior to me coming to this country, have worked to fight for our democracy, to make sure that it has equality. Those are the people I would thank. I would never get to meet them, but I can help the people moving forward, and I strongly believe in paying it forward. And that’s the reason I’ve been a public servant my entire career.