Interview with Hudson Institute’s Aparna Pande, whose book From Chanakya to Modi: Evolution of India’s Foreign Policy, was released on June 17.

Aparna Pande’s second book, From Chanakya to Modi: Evolution of India’s Foreign Policy, was released on July 17. Published by Harper Collins India, the book traces the roots and various strands of the Indian foreign policy.

In the book Pande, who directs the Initiative on the Future of India and South Asia at Hudson Institute in Washington, DC, tries to — in her own words — “examine the ideas, individuals and institutions that have shaped India’s worldview over the decades.”

Pande holds a master’s in history from St. Stephens College, Delhi; an MPhil in international relations from Jawaharlal Nehru University in Delhi; and a doctorate in political science from Boston University.

At Hudson, she is also a Fellow of the Center on Islam, Democracy, and the Future of the Muslim World. Her first book was Explaining Pakistan’s Foreign Policy: Escaping India.

In an interview with The American Bazaar, Pande speaks about her new book and US-India relations, among other issues.

What was the inspiration for the book?

Every country’s foreign policy has an underlying paradigm that explains what has influenced its policy and why that country takes the stand that it does. This paradigm is the product of the nation’s history and its view of self. Leaders, especially those in premier positions for long periods, also shape how a nation sees itself in relation to others.

I have always wanted to write a book that explains India’s foreign policy to the world: what are the ideas that have influenced foreign policy, the individuals who have left their mark and the institutions that play a role in shaping the policy.

In the book, you deal with a vast canvass of history: from 3rd century BCE to the contemporary world. Tell us more about the book?

My book is an effort to examine the ideas, individuals and institutions that have shaped India’s worldview over the decades. 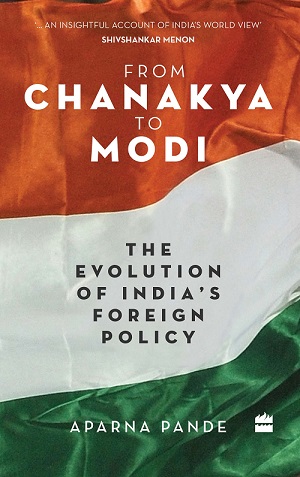 I go back in history to examine the legacy of the past on Indian foreign policy from the times of Chanakya through the medieval era and finally to colonial rule and the national movement. We can still see the legacy of ancient philosophers, medieval sultans and British colonial strategists on India’s external relations.

The moral dimension is strong in India’s foreign policy choices but so is Chanakyan realpolitik. Five thousand years of continuous history and civilization have bred a belief that the subcontinent is one, even if there are different political entities, and that India’s security is tied to its South Asian neighbors.

Every Indian Prime Minister from Jawaharlal Nehru to Narendra Modi has left his imprint on India’s foreign policy. My book not only analyzes the foreign policies followed by all prime ministers but also examines what their rationale was for doing so. While they tried to carve their own paths what is interesting is there has been a remarkable degree of continuity in the policies followed over the decades.

My book also looks at the stance not taken in earlier decades by examining the policy prescriptions offered by the right of center Swatantra party and the Bharatiya Jana Sangh.

A strong sense of Indian exceptionalism permeates every aspect of India’s external relations. Others might judge states by their economic or military indicators, but for Indians the past achievements are a source of pride and justification for India being viewed as a future great power.

The book examines the Indian desire for strategic autonomy and the pursuit of an independent foreign policy, territorial integrity and the criticality of South Asia and India’s neighborhood for India’s security interests, economic foreign policy, how India has perceived its role in the global arena and the changing perception of the Indian diaspora.

It also provides a detailed examination of the array of institutions that play a role in formulating and shaping India’s foreign policy — the primacy of the prime minister’s office, the role of ministry of external affairs, parliamentary oversight, the responsibility of the national security council, the role played by the media and new actors.

You talk about four strands that are often competing and complementing. Which strand does Prime Minister Modi represent?

The “Imperial” school of thought draws primarily from period of the British Raj. For this outlook, India is the center and Delhi knows best. India’s post-independence policy towards its immediate South Asian neighbors exemplifies this policy best. Delhi, whether under the British or after, has always believed that India’s central government is best suited to make security decisions.

“Messianic Idealism,” reflecting the mantra of global peace, justice and prosperity has served as the strong moral component of India’s foreign policy, inspired by the moral legacy of ancient Indian thought reiterated during national struggle under Mahatma Gandhi. Proponents of this perspective believe that India is an example for the world and that India has the duty to set an example for other nations.

And yet Indians have had no qualms in anchoring external relations in “realism.” Belief in moral principles did not turn Indian leaders into pacifists. Notwithstanding messianic idealism, New Delhi has always recognized the importance of hard power.

Finally, while desirous of playing a global role, India has also been reluctant to be drawn into global issues or ideologies. There is a strong streak of “isolationism” in India’s global outlook. It is one of India’s many paradoxes that it wants to be seen as a great power and is still often reluctant to do what is required of most great powers.

Of all India’s prime ministers, Mr Nehru best incorporated different strands of thought in defining India’s global outlook. For that reason, Indian foreign policy has sometimes been referred to as Nehruvian – a combination of Messianic Idealism with some parts of Imperial, Realist, and Isolationist elements.

South Asia is still viewed as India’s sphere of interest and India under Modi believes Delhi knows best. However, Indian leaders are increasingly aware that managing a sphere of influence is not only a function of telling others what to do but being able to expend resources that deny space to competitors. Hence Mr Modi’s emphasis on regional connectivity – trade, tourism and travel – within the region as well as a desire to reassure the neighbors of Indian intentions and resolve issues like border disputes.

In the last decade India has built close relations with the United States, participated in a number of regional groupings with countries like Japan and deepened defense ties with countries in Asia and beyond. Yet, the Indian state still has a Hobbesian view of the world and believes India can only depend on itself and hence the focus on military and economic self-sufficiency (Make in India) and the desire to balance close relations with the United States along with continuing its ties to Russia.

Prime Minister Modi is not known for slogans globally and yet like his predecessors on his travels and visits around the world Mr Modi’s speeches reflect Indian exceptionalism (example: yoga) and the belief that India is an example for the world and that the rest of the world must accord India stature commensurate to its civilizational contribution.

While desirous of playing a global role, India has also been reluctant to be drawn into global issues or ideologies. There is a strong streak of ‘isolationism’ in India’s global outlook. While India wants to be considered a global power, not just a regional one, there are limits to which India will exercise power. India remains reluctant to send its troops abroad except for UN mandated peacekeeping missions. This was true under Mr Nehru and is true under Mr Modi today, notwithstanding Mr Modi’s apparent desire to align India more closely with the United States and to create a grouping of Pacific powers aimed at containing China.

Chanakya was a political philosopher and adviser, among other things. Modi is a practitioner of the political craft and he has often invoked Chanakya. Do you see any similarities between the two? How much has Modi been influenced by Chanakya?

The legacy of the Arthasastra lies not simply in what was written but how Indian leaders, strategists and the public perceive Chanakya.

While Mr Modi is not new in evoking Chanakya – Jawaharlal Nehru even wrote an article using the pseudonym Chanakya – it reflects an attempt to tie his foreign policy to India’s ancient past as well as a desire to demonstrate that as per Chanakya’s dictums India’s leaders will be willing to use diverse policies to secure India’s national interests.

If we examine Mr Modi’s policies towards Pakistan we see that they have run the entire gamut from courting friendly relations to offering trade incentives and finally even threatening retaliation.

Similarly, with China, the Modi government’s initial hopes for a bonhomie based on a personal rapport between the two leaders did not last long. India has deepened defense ties with the United States, preferred to turn to Japan for building its infrastructure, pushed back against every Chinese attempt at a border conflict and yet continued economic relations with China.

You have been closely watching India’s growth and changes. How do you foresee the US-India bilateral relations under Modi and Trump?

In the last two decades India and the United States have deepened economic relations and built a close defense partnership. Shared values, a large Indian-American diaspora and the rise of China, economically and militarily, have also brought the two countries closer together.

The first meeting between President Donald J Trump and Indian Prime Minister Narendra Modi was a success on many fronts. At their joint press conference President Trump referred to India as a true friend and a relationship based on shared values. Prime Minister Modi spoke of United States as a robust strategic partner and spoke of Indian interest in a strong, and prosperous, and successful America.

For the Trump administration, a strategic relationship is one in which economic ties are paramount. Thus going ahead, I foresee deeper interactions in the defense and economic arenas.

In the defense arena, both countries have an interest in stability in Afghanistan, abiding interest in the Middle East, concerns about deepening Chinese presence in South and East China Sea, as well as collaboration to fight terrorism.