Interview with the producer of The Tiger Hunter. 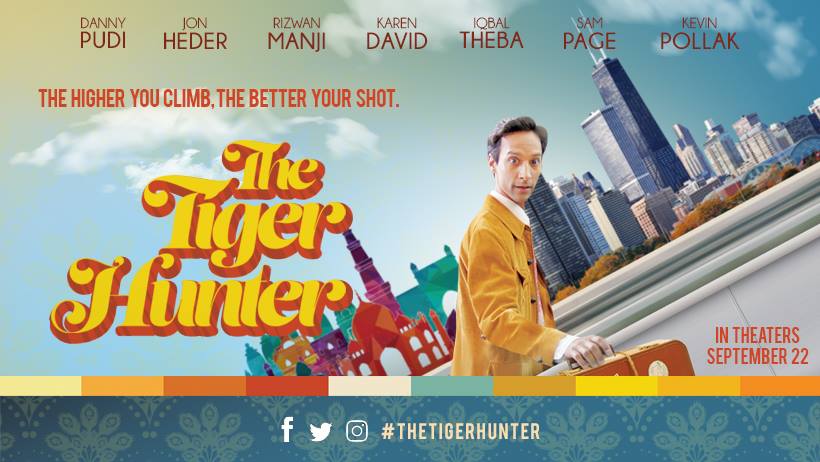 Hollywood is well-known for the lack of females in upper-level positions, let alone South Asian ones. However Megha Kadakia is helping to change that statistic.

Kadakia is a producer living in Los Angeles. With films like Raspberry Magic’ and Miss India America already under her belt, Kadakia is a busy woman. On Friday, The Tiger Hunter, a film starring Danny Pudi, was released nationwide. But apart from the films she enjoy a myriad of things. Kadakia spoke with The American Bazaar about her experiences.

How did you get involved with The Tiger Hunter? What should people know about this film?

Our Executive Producer, Alan Pao, recommended I take a look at The Tiger Hunter script and meet Lena Khan.  Lena was looking for a producer who could make the project happen.  She and I met and one thing led to another and before we knew it, we were in pre-production on The Tiger Hunter in 2014.  The Tiger Hunter is a heartfelt comedy.

Can you describe/explain the role of a producer?

I get this question a lot and the answer varies for each film.  However, in the indie filmmaking world, a producer typically is there from start to finish helping to raise funds, develop/polish the script, bring together the right crew, work with the director for casting, then actually produce the film and of course from there it is about finishing the film and getting distribution.  It is like running a mini-company for several years before you move on to the next project.  There is so much more involved than what I explained, but I’m getting tired just thinking about it :).

Are there many desis producers involved in Hollywood? If no, do you feel like you’re a pioneer and why/how?

The recent explosion of South Asian producers over the last several years is fantastic and it continues to grow.  I think we have come a long way from when I started about 12+ years ago. I don’t know if I am a pioneer in this genre but I do believe that many of us who started on years ago have impacted the South Asian Narrative and I believe that is a good thing. But with that said we need more diverse voices in the roles of producers, studio executives, writers and directors to continue to push authentic stories.

Tell me a little bit about your work background?

I am a producer, strategy consultant, development executive and a co-founder of a start-up for young girls.

Is your family supportive of what you do, how so?

My parents, my sister and my husband are there with me at every step of the way.  I couldn’t do what I do without their support.  My mom is the accountant on all my films and it helps to have that direct access and of course my dad is always either helping my mom or me with whatever needs to be done on my films. My sister Leena, brother-in-law Mitesh and husband Saurabh are my ‘megaphone’ for everything I do when it comes to film. I will say it helps also to have an extended and supportive network of family and friends who rally behind my work and process.

Paint the picture of what drew you into this business.

I grew up having one foot in the arts and one in academics – I played the piano and learned Indian Classical Dance – Bharata Natyam at the Shakti School of Dance in LA since I was 5 years old.  I never felt whole, unless I was doing something that was both left-brain oriented and right-brain oriented. The arts were always a core part of my identity, so combining my science and business-oriented interests with my artistic ambitions was just built into who I am.  Even while at UCLA I was part of the Cultural Affairs Commission that put on the Jazz Reggae Fest, UCLA World Fest and various other cultural events throughout the year.  Once I graduated I was involved in the South Asian Arts Movements both in New York and LA through Diasporadics and ArtWallah. It was a natural transition once I went to Business School at Columbia University in New York that I wanted to add that element back into my life and producing felt like the perfect combination of both art and business.

Tell me a few highlights of your career?

Getting funding for my first feature together — Raspberry Magic, written/directed by Leena Pendarkar

Are you happy with what you do?

I love what I do most of the time! Of course with any path you choose there will be challenges and sometimes those challenges feel insurmountable — but because I love producing films and telling authentic, diverse stories I push through and those large mountains become smaller and smaller hills!

Why is it important to have this film and the other films you chose to work on?

As a producer of color and a woman, I strongly feel that you have to uplift others and tell their stories.  I want these stories out there. I want these directors and writers to have their voices in the mainstream and I want to activate that through my producing.  I feel we have to help each other achieve our goals, and the only way to do that is to elevate the voices in our community of those directors and writers that have a vision that I believe should be told.  Further, it’s always great to help women succeed. Too often women don’t help other women and I think it really doesn’t benefit the overall cause when we do that – it only works when we come together.  And I’ve been lucky in that I’ve worked with very strong women, from Leena Pendarkar, Meera Simhan to Lena Khan.  As I evolve and as my projects evolve, I’ll always want each project to either share women’s voices and/or continue to bring forward great South Asian talent into mainstream filmmaking. And as a producer, I too hope that others will also see that in me.

Do you do anything else besides producing? If so, please describe?

Yes, I work at an incredible organization – Creative Visions – an organization that uses media, arts and technology for social change.  Founded by Kathy Eldon and Amy Eldon Turteltaub.  I am also co-founder of a property for young girls – Super Amazing Princess Heroes.

What are your hobbies?

I love Dancing – particularly Bharata Natyam. It is the only thing that brings me peace and when I don’t have it I feel incomplete.

What makes you the most happy?

Being with my friends and family, my two lovely nephews who give me absolute joy and my husband.

Describe a typical day for you.

I get up around 7 a.m., get ready and hit emails regarding any of my projects, around 9 a.m. off to Creative Visions or meetings for my upcoming projects.  I usually wrap up around 8 p.m. and then try to enjoy the rest of my evening taking walks, dancing or being with friends. I will say I usually start around 10 p.m. doing more work – I know it’s bad, but I can’t help it!

What’s something most people don’t know about you?

I’m pretty silly and goofy and love being by myself.  I often come across as put together and on top of it – which I am, but I love to let all that go and just be!

When and where can people see The Tiger Hunter?

Everywhere!  It opens today, September 22nd and you can buy tickets at www.thetigerhunter.com.