Nineteen museums of the Smithsonian will be “taking part in this moment of celebrating connections between Asia and America”.

Washington, DC, October 12, 2017 – When the world renowned Smithsonian Institution reopens the national museums of Asian art, visitors will be treated to a weekend of festivities nothing short of spectacular.

The IlluminAsia Festival, October 14-15, on America’s National Mall will feature: tours of new exhibitions at the renovated Freer Gallery of Art and its sister, the Arthur M. Sackler Gallery; cultural performances, music; community art projects; and the cuisine of Asia. The unifying theme is ‘Where Asia Meets America’.

Together, the Freer and Sackler galleries form the national museums of Asian art. They are the oldest (Freer) and the youngest (Sackler) art museums on the National Mall, an integral part of the gigantic Smithsonian family.

This weekend, the entire 300-foot facade of the Freer gallery will be transformed into a screen for a projection video, ‘A Perfect Harmony’ about Charles Lang Freer (1854-1919) after whom the museum is named. “It’s spectacular”, said Dr. Julian Raby, director of the Freer and Sackler galleries.

At a press preview, Wednesday morning, announcing the re-opening of the museums, he described the art galleries as “a place of harmony amongst people”.

Noting that “Charles Freer believed in commonalities, a shared sense of beauty across different peoples, different cultures, different periods”, Dr. Raby told journalists, “This helps prompt us to celebrate the Freer and Sackler not just as a destination, but as a starting point. Here we can stand in awe of people of another generation, of another time, another place. We can, like Freer, realize that for all the differences there was, still is, a common urge for adopting a shared vision of beauty”.

The Freer gallery will be opening its doors this weekend after an 18-month renovation allowing visitors to view the stunning masterpieces from another era while engaging in conversations relevant to the present day. “So just as we hope to offer a place for private contemplation, so too we want to offer a forum for public debate on the vexing, divisive issues of our time”, explained Dr. Raby. “If we explore what divides us, we can also discover what unites us”, he said.

“This museum was founded in admiration of the arts of Asia and the people who created that art. It was founded in the belief in the redemptive power of art”, he added.

John Davis, Smithsonian’s Under Secretary for Museums and Research/Provost, told reporters, “The upcoming reopening of the Freer and Sackler galleries celebrates more than the return of two remarkable art museums. It marks another milestone in the Smithsonian’s commitment to make art accessible and relevant to all Americans”.

He disclosed that the nineteen museums of the Smithsonian will be “taking part in this moment of celebrating connections between Asia and America”. Collectively, the institution’s six art museums will be engaged in allowing people to share values and ideas, and celebrate the creative process.

About the “unique collection” in the Freer Gallery, Davis who is one of the nation’s leading academics in American art history, noted that it “combines the greatest examples of art from a vast spectrum of Asian civilizations with a smaller and indeed quite rich collection of American painting. It captures the moment when the US began looking outward”, he said, and is so relevant to the theme of the Freer-Sackler galleries – the place ‘Where Asia Meets America’. 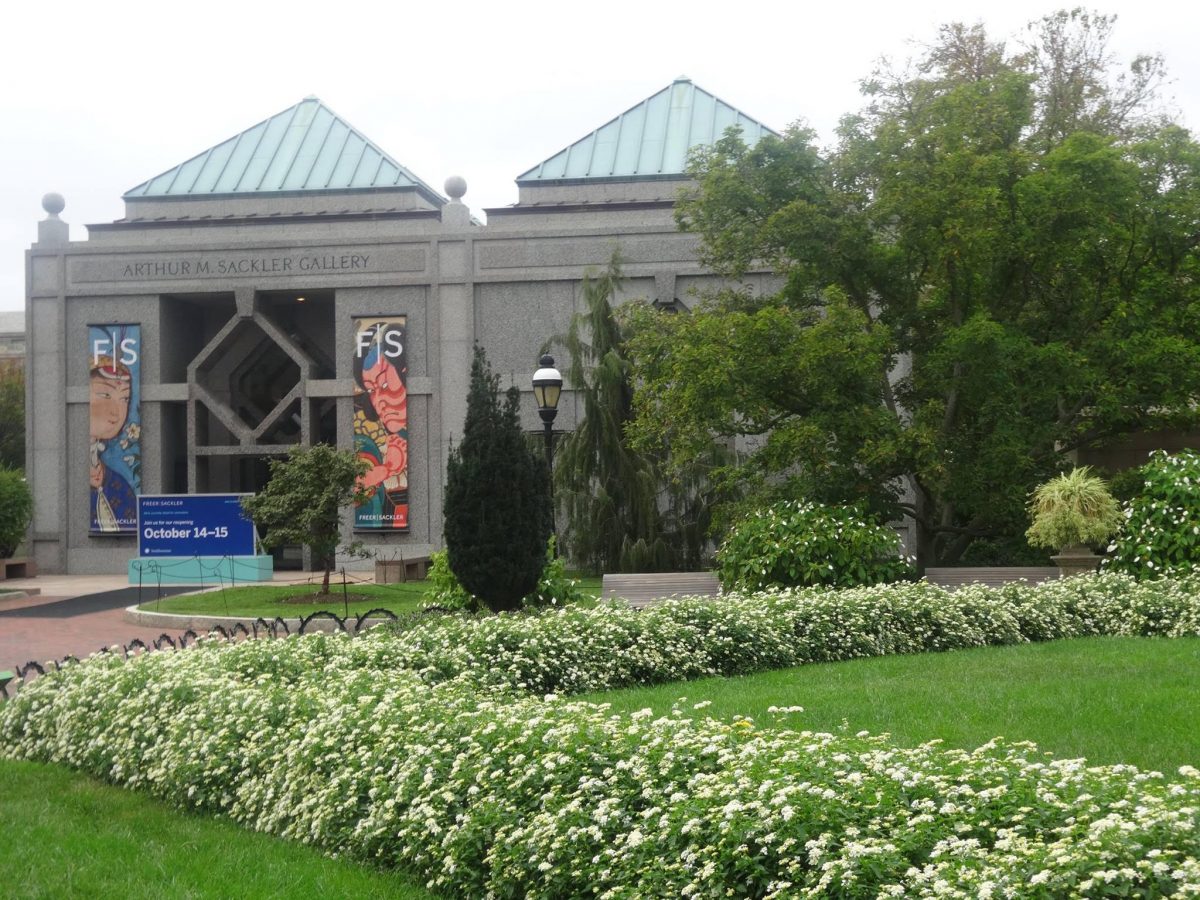 Dr. Massumeh Farhad, Chief Curator of Persian, Arab and Turkish art at the Freer-Sackler, told journalists, “Instead of reorganizing our galleries in chronological order or in a particular medium, we have created them like exhibitions with specific themes and titles”. Noting that the themes have a contemporary relevance, she drew attention to the South Asian exhibit, Arts of the Indian Subcontinent, at the Freer which is titled ‘Body Image’. The exhibition considers how the body is central to Buddhist, Hindu, and later Islamic art in India and the rest of South Asia.

“We all live in a culture where everyone is obsessed with the body”, Farhad said. “So, this is a good way for our audience to understand a culture that may otherwise be unfamiliar”.

Dr. Lee Glazer, Curator of American art at the Freer-Sackler, underscored that “each of the galleries in the Freer is being treated as a mini exhibition space, each with a theme, idea and unique character”.

She spoke of an “idiosyncratic juxtaposition” insofar as singular masterpieces, destination objects from all over Asia, are shown alongside works of American artists of the late nineteenth century.

“Freer believed his museum could be an incredibly democratic place, a place not just for the scholar and the expert, but for all visitors to gain for themselves the power to see beauty”, Glazer said.

Drawing a distinction between the national museums of Asian art, Dr. Raby noted, “The Sackler is as playful, as theatrical as the Freer is calm and contemplative. One provides a moment of hush, the other a rush”.

Dr. Raby has served as director of the galleries since 2002 and recently announced his retirement. Under his able guidance, the Freer and Sackler digitized their entire collections making them accessible online, the first museums to do so.

The Sackler Gallery was closed briefly this summer and it reopens with four new exhibitions: ‘Terminal’ by artist Subodh Gupta born in Bihar, India; ‘Encountering the Buddha: Art and Practice across Asia’; ‘Resound: Bells of Ancient China’; and ‘Divine Felines: Cats of Ancient Egypt’.

Dr. Raby described ‘Terminal’ as “a mesmerizing work by one of India’s most celebrated contemporary artists, Subodh Gupta. It fills the entrance pavilion of the Sackler”, he said.

A monumental installation, the work comprises some 30 gleaming brass towers assembled with containers commonly found in India. The towers are connected by an intricate web of thread and have spires akin to what one sees on the top of mosques, temples and churches. But the exhibit does not have any particular symbol designating religious affiliation.

“Gupta extracts humble objects from daily life and emphasizes their symbolic potential through scale and materials”, Carol Huh, curator for contemporary art at Freer-Sackler, said. “In ‘Terminal’, he recontextualizes a familiar shape to encourage reflection on the idea of community, especially in a world increasingly challenged by religious differences”.

Regarding the renovation of the Freer Gallery, Dr. Raby told journalists, “We were influenced by two of Charles Freer’s guiding principles which he learnt from Asia – space and light”. There are “no grandeur extensions”, he said, adding it is “more like refreshing the building and reaching out to visitors in a new way. Each gallery is not an accumulation of stuff from a particular region; it is a mini exhibition”.

Glazer noted, “There is in the Freer a kind of holistic, aesthetic experience most palpable in the building itself – the restraint and elegance of the architecture, the intimate proportions of the galleries and the abundant natural light”.