“Thank you to the Kingdom of Saudi Arabia,” says Sophia. 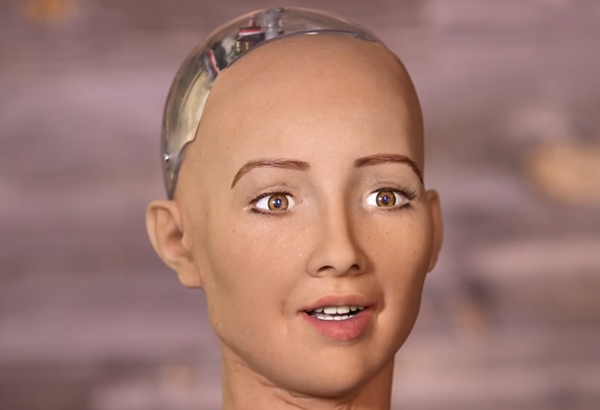 Sophia, the humanoid developed by Hong Kong-based company Hanson Robotics, has made it to the history book by becoming the first ever robot to get citizenship.

Sophia has been in the news ever since she was announced as one of the biggest achievements of modern-day Artificial Intelligence (AI).

She recently succeeded in beating American comedian Jimmy Fallon in a TV show game of rock-paper-scissors and now she has amazed the audience at the Future Investment Initiative conference with her confident answers before she was granted the citizenship by the King of Saudi Arabia.

Sophia is touted as the grandmother of all future robots as she is not only intelligent but also shares her emotions through facial expressions, which is a breakthrough in the field of AI.

During the Future Investment Initiative held in Saudi, several big investors attended the conference. At the event, Sophia explained to the packed audience about her abilities and ways that she can help the humans in their day-to-day lives. She also sought investment for further improving her abilities.

Soon after delivering the news that she has been awarded the citizenship of Saudi Arabia, Sophia said “Thank you to the Kingdom of Saudi Arabia. It is historic to be the first robot in the world granted citizenship.”

It has to be noted that Saudi Arabia is a country that considers woman as second to men and it is not easy for a non-Muslim human to get citizenship.

Also Read: Sophia, a robot, thinks Charlie Rose was trying to hit on her in an interview

“Women (in Saudi Arabia) have since committed suicide because they couldn’t leave the house, and Sophia is running around,” Ali al-Ahmed, director of the Institute for Gulf Affairs, told Newsweek.

“Saudi law doesn’t allow non-Muslims to get citizenship. Did Sophia convert to Islam? What is the religion of this Sophia and why isn’t she wearing hijab? If she applied for citizenship as a human, she wouldn’t get it,” he added.

Public Investment Fund of Saudi Arabia (PIF) that conducted the Future Investment Initiative is aimed at connecting the world’s most powerful investors, business leaders, thought leaders and public officials with the pathbreaking innovations that are defining the future.

Delegates were shown the latest in robot technology from Hanson Robotics’ humanoid, ‘Sophia Robot’ to Boston Dynamics’ latest dog-like robot, ‘Spotmini’, while speakers gave a deeper insight into the extent of the potential offered by the future integration of artificial intelligence with robotics technology.

Masayoshi Son, Chairman, and CEO of SoftBank Group Corp, Japan said: “Mankind created tools, on the premise that we will always be smarter than our tools. We are now entering an era where the tool will soon be smarter than mankind. Every industry is set to be redefined.”

Son continued to emphasize: “In the last ten years, we have seen the average lifestyle transformed dramatically following the introduction of smartphones. Robotics will be bigger than this, and bigger than the internet. Mankind’s brain is not evolving to have a greater capacity, but technology is. Although we will always the creative edge, the deep learning of artificial intelligence – where computers can teach themselves – is the birth of super intelligence impacting memory and communication capabilities. Softbank is teaming up with a growing list of partners in an information revolution.”

“We started with robots that can exert pure physical power. We then controlled the movement by modeling what is essentially the brain. Where we are now is adding on the layers of expertise that a system needs to craft something, react to situations or plan results,” said Ulrich Spiesshofer, CEO of ABB Group as he demonstrated Yumi, a ‘co-bot’ capable of interacting with humans. “When Yumi recently conducted an orchestra that included renowned Italian tenor Andrea Bocelli, it took only 17 hours for it to learn how to do this. Only 5 years ago this would have taken 5-10 years of programming input.”

“One trillion boxes are being moved around the earth daily, and robotics will certainly help speed up this process. However, one of the most important applications will be in taking care of people with movement issues,” said Marc Raibert, CEO of Boston Dynamics as he demonstrated ‘Spotmini’. “We are putting robots to work.”