“My vendors didn’t deliver on time and I failed,” says Goel. 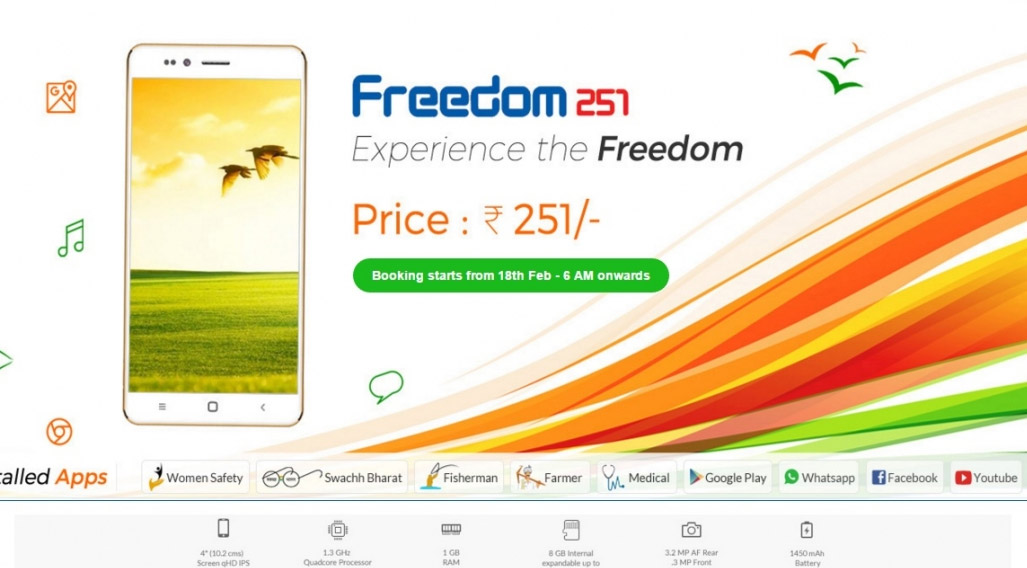 Are you one among the millions of Indian’s who booked what was then called the cheapest smartphone in the world – the Freedom 251, there is still a chance that you will get the device by next year.

According to IANS, the man behind the Freedom 251 smartphone Mohit Goel, who went to jail for 6 months for failing to deliver the promised product in time, is now out and is seeking the government’s hand-holding in keeping his promise.

The report said that Goel while speaking to reporters complained that despite him keeping his commitment to Modi’s Make in India and Start-up India initiatives, the government agencies failed to assist him in achieving his dream – to provided smartphones to all Indians at a never-before-seen price tag.

Goel is still optimistic that he can deliver his promise and the Freedom 251 can be shipped by March-April 2018 if government agencies back him in his mission.

He also tried to justify the reason behind his now-defunct company Ringing Bell failing to deliver the phones.

Ringing Bells Pvt Ltd had hired two Delhi-based men, who Goel alleges took nearly Rs 3.5 crores (about $544,250) from him for delivering handsets last year. But, the duo cheated on him and didn’t deliver the handsets on time and thus he failed to deliver the booked Freedom 251 handsets to the customers.

“I paid the duo nearly Rs 3.5 crore and, in return, they cheated me. They siphoned off the money and did not deliver any phone. In February this year, some distributors filed a case against me and I was jailed for six months. Now with the fresh arrests, people will come to know why I failed to deliver on my promise,” Goel told IANS.

Vikas Sharma, 35, and Jeetu, 40, who allegedly cheated Goel were arrested on Sunday and have been sent to Dasna jail, this after Goel filed a complaint with Noida police accusing them of cheating him, confirmed Superintendent of Police, City, Arun Kumar Singh.

On the basis of an FIR filed by a distributor based in Ghaziabad, police had arrested Goel in February. The distributor alleged that Noida-based Ringing Bells defrauded Ayam Enterprise of Rs 16 lakhs (about $24,880).

Now, that a compromise was agreed upon between the parties involved in the case and Goel is out of jail he is still harping to go ahead with on his dream mission Freedom 251.

Speaking to IANS he said, “My vendors didn’t deliver on time and I failed. Our company’s President Ashok Chadda is still languishing in jail. I need one opportunity to come back clean and provide people handsets by March-April next year.”

Goel further noted that “The big players today have adopted my model and are now giving smartphones in as low as Rs 1,300 [about $20], like Karbonn. The Jio model for paying Rs 1,500 [about $23] in advance for a smartphone is similar. They have deep pockets so they can afford but why don’t people ask them how they are making smartphones so cheap?”

Goel had said his company successfully shipped 5000 units of Freedom 251 mobile smartphones on July 8, 2016, and the amount it received from the people who booked the phone was fully refunded.