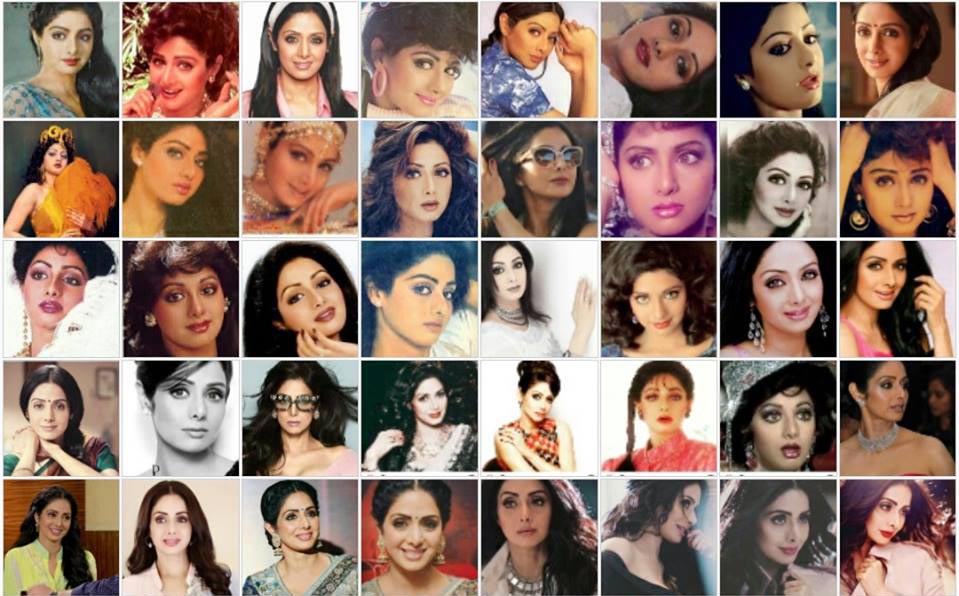 A tribute to one of Bollywood’s most shining superstars

This past weekend, Bollywood fans all around the world received the devastating and shocking news that superstar actress Sridevi passed away. For me, it felt like I had been hit by lightning – was this possible? An actress whose films I had grown up with, who seemed like there was nothing but happiness in her life with her husband and two children, suddenly gone, just like that? Once again, this incident has made me realize how fragile life is. There is no telling what is around the corner, and one should live each moment with joy.

I think it is important to examine, just how important Sridevi’s contribution to Hindi cinema was. In memory of Sridevi, below are what I believe to be her 5 most memorable films:

This is one of my all-time favorite movies. Directed by Balu Mahendra and starring Kamal Haasan and Sridevi, this is one of the most haunting, romantic and touching movies ever produced in Bollywood. It was one of Sridevi’s first in Hindi and tells the tale of an accident victim who mentally reverts back to her 8 year old self. When she is rescued from a brothel by a kindred man, without any memory of where she is from, they strike up a beautiful friendship. It would be a travesty to reveal how the film ends, but believe me, it is one of the saddest endings that exist in movies. Undoubtedly, this is the Sridevi movie for which I respect her the most due to her incredible childlike performance at such an early time in her film career.

Yash Chopra’s evergreen romantic classic, Chandni is a film that people still remember fondly to this day. A love triangle, also featuring Rishi Kapoor and Vinod Khanna with Sridevi, the film is best remembered for Sridevi’s performance and musical hits. How can one forget the Chandni title track, the lilting song Mitwa, or Mere Haathon Mein Nau Nau Choodiyaan? An iconic film in Sridevi’s filmography.

One of India’s first sci-fi epics, starring Anil Kapoor and Sridevi, the film is the story of a man who discovers his father’s formula to become invisible, which he subsequently uses to save India from the evil Mogambo and fight crime. Sridevi is hilarious in this movie, and although Anil Kapoor was the main star, Sridevi remains as memorable in this movie as ever. The songs Hawa Hawaai, Kaate Nahin Kat, and Karti Hoon Main Pyar showcase the range of Sridevi in this movie and till this day are memorable songs of hers.

A controversial movie ahead of its time, Yash Chopra’s older man-younger woman romance movie flopped upon release, though he would later express his fondness for it. Anil Kapoor was the leading man, while Sridevi played the double role of the woman Anil Kapoor loves and her daughter, with whom he also falls in love with. Taking place in Rajasthan, songs like Morni, Kabhi Main Kahoon, Meri Bindiya and Megha Re Megha were super hit songs, only accentuated by the presence of Sridevi.

I used to be scared of this movie as a kid, but now appreciate its unique story. Harmesh Malhotra’s hit about a vengeful female snake who would do anything to protect the man that she loves, this film was a Sridevi show all the way. Rishi Kapoor was the leading man, but no one remembers this film for him. Sridevi’s dance during Main Naagin is a highlight of the movie. I highly recommend this movie for its unique story. Fun aside, the film was such a big hit that it spawned a sequel, Nigaahen, very rare in those days, which starred Sridevi and Sunny Deol.

As you can see, Sridevi left behind a cinematic legacy that will be long remembered for years to come. Sridevi, we will miss you but will always remember you through your films. You are our “Chandni” forever!