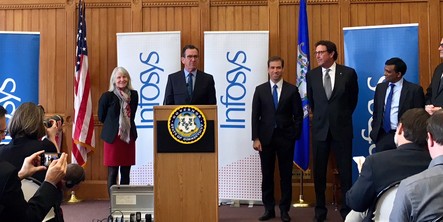 The facility is part of the company’s plans to create 10,000 American jobs.

In a major announcement that reflects its hiring strategy for the future, Indian IT giant Infosys will set up a $21 million regional center in Hartford, Connecticut, and will hire 1,000 employees over a period of four years.

In an official announcement, Infosys said the center will have a special focus on insurance, healthcare and manufacturing. It added that the Connecticut Technology and Innovation center will serve as the global hub for Infosys’ InsurTech and HealthTech efforts.

Infosys said the plan to set up a new innovation center and the decision to hire “local talents” is part of the company’s efforts to shrink the IT skills gap in the marketplace.

“Today marks yet another landmark day in Connecticut’s economic development efforts, at a time when our investments are bringing new life and vigor to our Capital City,” Gov. Dannel P. Malloy said. “I am thrilled to welcome Infosys to Connecticut and congratulate them on their decision to establish a Technology and Innovation Hub in Hartford. Connecticut’s tremendous assets and talent pipeline continue to attract high caliber companies to the state, and I look forward to the value that Infosys will bring to our business community.”

“We are excited to announce the expansion of our presence in Connecticut and to create 1,000 technology jobs in the state,” said Ravi Kumar, President, Infosys. “This investment will further strengthen our ability to serve clients’ needs throughout the New England region and expand the local workforce to help our clients compete in the rapidly digitizing insurance, healthcare and manufacturing sectors. Hartford’s position as the Insurance Capital of the World, paired with Connecticut’s world-renowned academic institutions, will place Infosys in close proximity to valued clients and accelerate the recruitment of highly-skilled local talent.”

The new announcement falls in line with the company’s earlier statement that it will open four new technology and innovation bubs in the United States and hire 10,000 skilled American workers over a span of two years.

Infosys is confident of addressing specific client needs in key industries such as financial services, manufacturing, healthcare, retail, energy and more through these hubs.

“Infosys is committed to hiring 10,000 American technology workers over the next two years to help invent and deliver the digital futures for our clients in the United States,” its then-CEO Vishal Sikka, said in 2017.

“I am thrilled that Infosys, a global information technology company, is making Hartford one of four innovation hubs in the United States,” Hartford Mayor Luke Bronin said. “This announcement is huge for Hartford and for Connecticut.

As part of the company’s establishment of the hub in Hartford, the Connecticut Department of Economic and Community Development (DECD) has announced that it will provide up to $12 million in grants after certain job creation milestones are met through Governor Malloy’s First Five Plus Program.