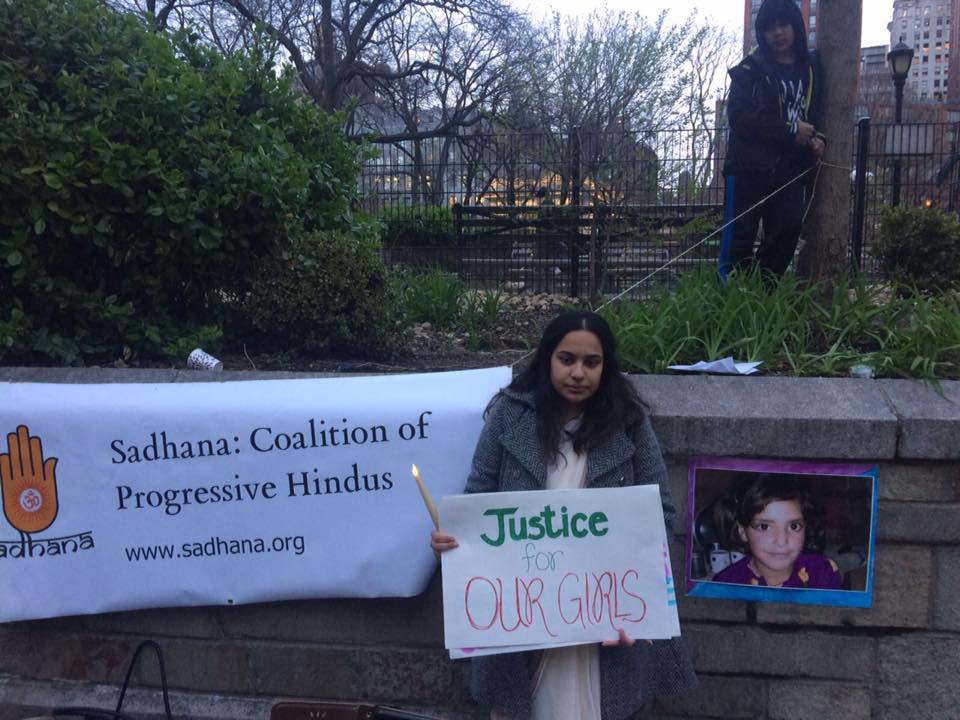 The organization also attacked the ruling government in India for its inaction and called it functionaries and allies perpetrators and supporters of rapists.

Sadhana, a New York City-based Hindu organization that aims at building a peaceful and tolerant Hindu society, on Monday marched to Union Square, New York, demanding justice for the rape victims of Kathua, Unnao, and Surat.

The United for Justice rally, which was attended by the members of Sadhana, called for justice for the 8-year-old Asifa, who was brutally raped and killed inside a temple in Jammu and Kashmir, the rape victim in Unnao, who lost her father in her battle to get justice, and the gang rape and murder of an eight-year-old in Surat.

According to the event’s official Facebook page, the rally was conducted to let the victims and their family “know that they are not alone in their fight.” They also called the rally a display of solidarity to all the victims who suffered gender and religion-based violence.

The rally dismissed the advocacy group Hindu Ekta Manch for supporting rapists saying that they will not allow polluting the word Ekta (Oneness) by associating it with supporters of hate mongers and rapists.

“We are deeply disturbed that a group called the Hindu Ekta Manch was formed to defend and advocate rapists. Ekta is a word that is very important to us as Hindus — it means oneness and unity. And we will not let such words be co-opted by hatemongers and rapists,” read a post on Sadhana’s Facebook page.

The organization also attacked the ruling government in India for its inaction and called it functionaries and allies perpetrators and supporters of rapists.

“In both #Kathua and #Unnao, agents of the Hindu nationalist government of India were not only perpetrators but explicitly supporters and allies to rapists. The action is needed now more than ever. We need to unite against this bigotry and violence,” read a tweet by Sadhana.

Suneetha Vishwanath, co-founder of Sadhana while speaking to the gathering in Union Square said, “Some actions are so wild that it becomes necessary for people to come out and condemn them. These rapes in Kathua, Unnao, Surat and any other part of the world is nothing short of evil.”

Posted by Sadhana: Coalition of Progressive Hindus on Monday, April 16, 2018

“We at Sadhana though we should take the lead in organizing this effort because so many Hindu and BJP affiliated men are involved in these atrocities,” she said. “We have gathered today with all of the beautiful diversity in front of us – we are Hindus, Muslims, Sikhs, Christians, Jews and even people who do not affiliate to any religion, we all share the passionate message of love and calls for justice for the victims.