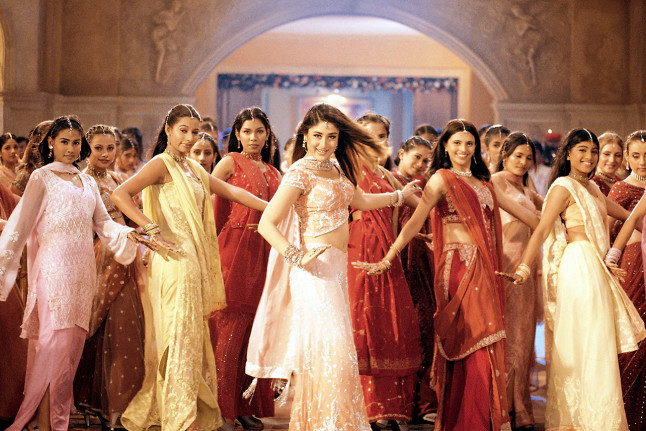 It’s no secret that Bollywood is a dynamic force in India. For many Indians, it is a source of pride, and as Shashi Tharoor asserts, a source of diplomatic soft power. The influence of Bollywood is so deep-seated that it simultaneously shapes and reflects the Indian identity, art, history, social issues, politics, unrealistic expectations for love etc.

Bollywood is a word that’s met with “I love Shah Rukh Khan!” everywhere from the United States to Afghanistan. It’s a part of my culture that I can mention in casual conversation to my non-Indian peers, and most, if not all, would follow along. Some may even offer unsolicited commentary on Slumdog Millionaire! Such nuanced views — thank you, Chad!

Bollywood has been there for me on those Friday nights, when I don’t feel like leaving my cave (room), in airports during long layovers, and when I feel like I’m suffocating at the whitest of PWIs. Recently, Bollywood resolved an awkward encounter with Moroccan police officers, as I explained that, yes, in fact, I am Indian, and, yes, Shah Rukh Khan is my beloved uncle.

Bollywood has also been credited (by my dhosts — friends — and I), as helping maintain a relationship with the motherland for the Indian diaspora. Some of my friends have even become conversational in Hindi, solely from watching Bollywood movies.

But, this piece, is not a love letter to Bollywood. It’s a conscientious attempt to step back and critically examine the films that I have mindlessly consumed for the majority of my youth. Some khana (food) for thought: In a newly independent country, what role does this powerful form of media have on cultivating a national identity, and consequently, violent Hindu nationalism in within Indian borders?

Some context on Hindutva, the predominant form of Hindu nationalism: Hindutva or “Hinduness”, a term popularised by Vinayak Damodar Savarkar in 1923. The Bharatiya Janata Party (BJP), which is the current ruling party in India, adopted Hindutva as its official ideology in 1989. The ideology seeks to establish the hegemony of Hindus and the Hindu way of life; it serves as the rationale for violent attacks against religions minorities, including Dalits (people of the lowest cast in the varna system of Hinduism).

Since I posed the question, its safe to say that I think the answer is a strong “yes.” Some Bollywood films unequivocally utilize the same “divide and conquer” method used by British colonists. Colonialism, nationalism, and subsequently the Indian film industry, all thrive on the ability to create an enemy, through a tedious process of “otherization.” It should come as no surprise, that in Indian films, Pakistan is the dangerous enemy and minorities, particularity Muslims and Dalits, are the “other.” Even less surprising is how Kashmir is portrayed as a borderland full of terrorists being kept in check by upstanding Indian forces. Read on for a critical look at how our favorite films are political tools utilized by actual tools @bjp. 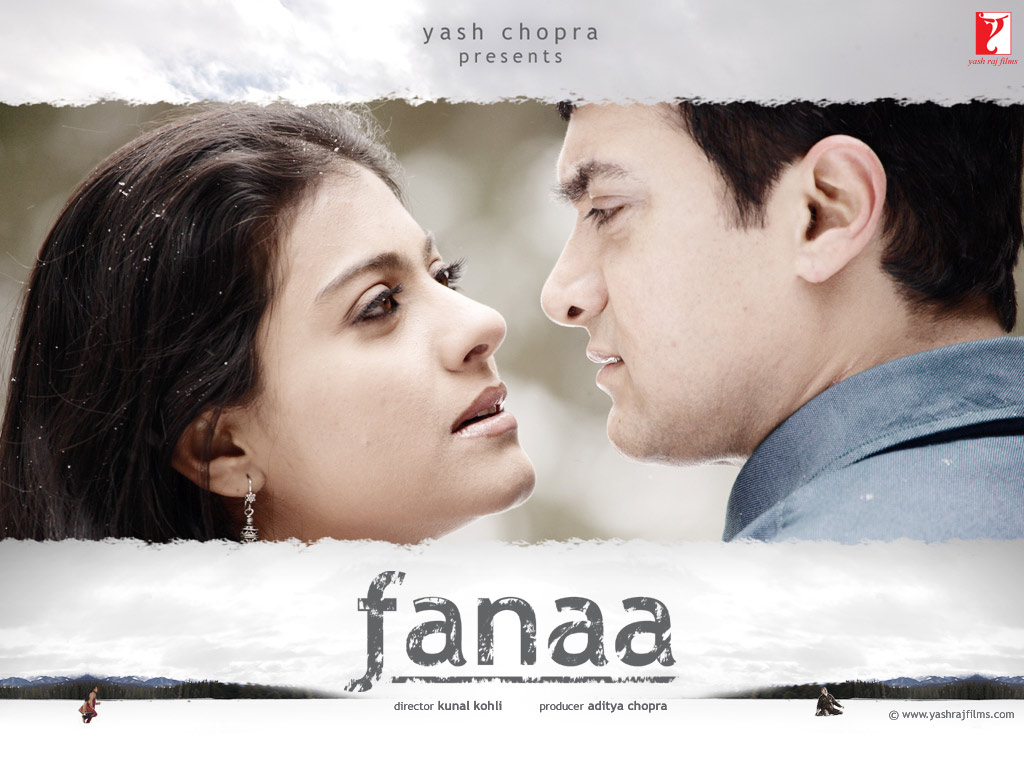 This one has me in my bag. I remember going to Musicworld, the local music store in Kochi, Kerala, with my grandma to buy the Fanaa soundtrack, when I was 8. Little did young Hana know…

“Fanaa,“meaning “destroyed” in Arabic, Persian, Urdu, and Hindi, stars Aamir Khan, who plays the role of a tourist guide in New Delhi named Rehan Khan and Kajol who plays a blind Kashmiri woman, Zooni Ali Beg. Their blossoming romance is interrupted when a terrorist attack by a Kashmiri insurgent reportedly kills Rehan.

We later learn that Rehan is an undercover Kashmiri insurgent, and he has acquired a nuclear weapon to detonate in a major Indian city. Seven years later, in a strange fate, Rehan ends up seeking refuge in Zooni’s house while on a mission and they get married. When Zooni’s father reads the report about Rehan and confronts him, Rehan accidentally throws Zooni’s father off a ledge. Then, in a snowy landscape that is supposed to be Kashmir but is actually southern Poland,  Zooni fatally shoots Rehan. The film ends with a scene of Zooni and her son visiting Rehan’s grave.

Fanaa is one of the many examples of the deplorable depiction of Kashmiris as militants and Muslims as inherently violent. Some context about the Kashmir conflict: Born from the partition of India in 1947, the violent conflict continues today, involving three countries — China, India and Pakistan — who are in dispute over the territory. Most of the Indian part of Kashmir is under brutal Indian military occupation that violently oppresses the movement for self-determination. Kashmir is one of the most heavily policed and militarized regions; the conflict has left 70,000 dead and 8,000 missing as estimated by local human rights group CCS.

What better way to undermine a self-determination movement than to cherry pick acts of violence brought on by years of brutal neocolonial oppression? Yet, viewers who do not tap into their critical consciousness are left visualizing Kashmiris, and Muslims as a whole, as militants who tried to blow up an Indian city and ruined the life of a helpless blind lover — even if subconsciously.

Furthermore, this film barely makes the effort to incorporate elements of Kashmiri culture, be it in art, language, dance, or traditions. While this qualm may seem trivial when compared to aforementioned problems, it is contextualized by the fact that the portion of the film that took place in Kashmir could not even be filmed in Kashmir, let alone incorporate Kashmiri culture. Instead, it was filmed in Poland, because one actor refused to film in Kashmir, citing civil unrest. I don’t have to explain the irony behind choosing not to film in a land that is under the Indian occupation, while depicting the people of that land as the enemy of the Indian people. This is the same land that Indian politicians claim to be an inalienable part of India.

Fun fact: the BJP banned Fanaa in Gujarat after Aamir Khan spoke out about how the government was not doing anything to help  villagers displaced by construction of the Narmada Dam. 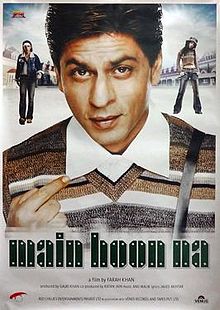 Glorifying the military is a tactic widely used to build nationalism. It’s the reason Trump proposed a “military parade,” instead of, for instance, investing in better healthcare for veterans. India, a nation much younger than Trump’s America, houses the world’s second largest military. India’s investment in its military shines through in Bollywood; Indian film thrives on the glorification of the best and worst aspects of Indian society and the Indian military desperately needs some good press.

The film is a story of of Indian army Major Ram Prasad Sharma (Shah Rukh Khan), who is recruited to ensure that “Project Milap” — the releasing of civilian captives on either side of the borders of India and Pakistan — can take place as a sign of trust between the two nations. The film has been lauded as discussing Indian-Pakistani relations from a neutral point of view. Tip: nothing is ever neutral. 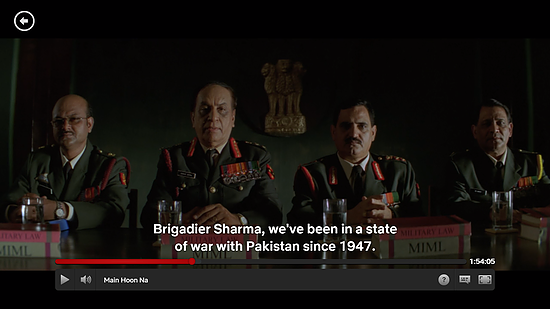 This scene depicts the opinion of the military personnel trying to sabotage Project Milap. This scene is disturbing, not because of how it fits into the plot, but because of how relevant it is to the current state of Indian politics. If I were to say something similar on the streets of New Delhi today, there would be many who would agree with me. And I might even be able to convince some to terrorize a mosque or disrupt jummah prayer. It would probably be better received if a volatile Hindu nationalist said this to his comrades rather than my Muslim self.

And here we have yet another example of Kashmiris being vilified, in the midst of a scene when SRK is trying to convince the opposition that Pakistan is not the enemy.

So essentially we’re all just supposed to blindly rally behind old men who dream up wars for young people to die in, right? That’s what freedom in the world’s largest democracy is all about, right? Wrong. 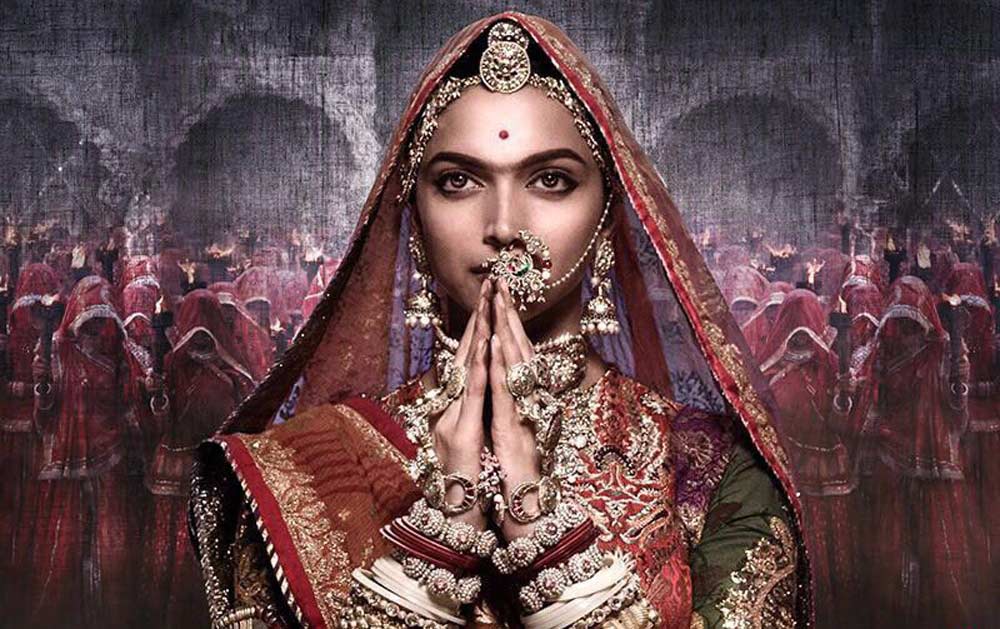 Bollywood is so fundamental to and reflective of Indian society that a “controversial” film can spark riots before the film is even released. A group of right-wing Hindu nationalists believed that the film would depict a romantic relationship between Padmavati and an invading king, Alauddin Khilji, who is Muslim. And for that, a school bus full of children was vandalized and a public bus was burned down. A spokesman for the Hindu nationalist group said that he would“cut the nose” of Padukone, after the actress said protests would not stop the film’s release. The basis of these protests are just mind blowingly dumb which prompted the director to state that there will be “no romantic scene or song or dream sequence between Rani Padmavati and Alauddin Khilji.” So what exactly are they protesting? The fact that Muslims exist in the pluralist history of India?

The futile riots managed to overshadow a much more important issue: the dehumanizing depiction of Muslims within the film. Perhaps we’ll see a day when Bollywood isn’t profiting off the narrative of a patriarchal, sex-crazed, tyrannical Muslim king who is wreaking havoc in an egalitarian Hindu nation.

If the violent faction of Hindu nationalists, who are already marinating anti-Muslim sentiment, took a break from rioting and watched the film, their views of Muslims would be reaffirmed. And maybe burning down a Rohingya refugee camp or partaking in a “beef lynching” or two will proudly reaffirm their commitment to Hindutva. Possibly, while sporting a  t-shirt with a graphic of a Kashmiri civilian being used as a human shield.

The bottom line is that Bollywood plays a role in exacerbating the religious polarization and toxic nationalism rampant in India today. That being said, there are some newer Bollywood films, such as Dhobi Ghat and Dangal, which do not play into these repackaged colonial-esque narratives. Nevertheless, in this political climate, we’re taught to consume news media through a critical lens. It’s just as important to critique the media we consume for fun. Go ahead and unlock your critical consciousness, friends. It’s liberating.

Perhaps we’ll see a day when Bollywood moves past its bad habit of building divisive, postcolonial nationalism but until then, Malcom X said it best: “The media’s the most powerful entity on earth. They have the power to make the innocent guilty and to make the guilty innocent, and that’s power. Because they control the minds of the masses.” Jai Hind, once we get our shit together.

(Hana Manadath, an undergrad student of American University in Washington, DC, is a self-taught photographer with an eye for creativity since her iPhone days. As a visual artist, she draws inspiration from the places she travels to and the stories belonging to those places. She has photographed in 16 countries around the world. She has photographed influential figures such as Malala Yousafzai, Dena Takruri, Isra Chaker, and Gabrielle Union. Her instagram is @hfmphotos_)

Women’s bodies as battlegrounds: Social media discourse and the weaponization of rape in Kashmir (February 24, 2020)