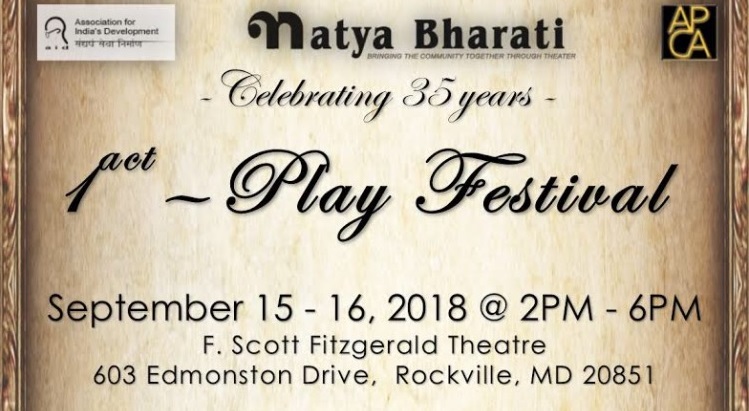 The year was 1984. Young professionals from India whom had migrated to the States and had carved a space for themselves in the professional milieu of our country were enjoying life but something was missing. Something that had been an indelible part of their lives back in India – a love of being a part of the performing arts, of being a part of theater. Thus, this small but passionate group of theater enthusiasts in the  Washington, DC, area got together and decided to form Natya Bharati, a non-profit organization which has grown at almost 35 years of existence to be a premier outlet dedicated to providing high quality South Asian plays to the community. In addition, it was one of, if not the first, South Asian based theater groups in the country. Their maiden production, Kasturi Mrig, became a sold out affair and since that day, there has been no looking back, with the organization staging multiple productions each year.

This September 15 and 16, the company will be delighting audiences with a two-day play festival, featuring one-acts in all different genres from 2-6 PM both days at the F. Scott Fitzgerald Theatre at 603 Edmonston Drive, Rockville, MD 20851.

The festival will begin on September 15 with the play Amma, written by Uday Krishna and directed by Meera Narsimhan and Uday Krishna. This Hindi production will revolve around the theme of technology and how it can serve to connect the living and their lost loved ones. A modern concept, this play will enlighten and bring to the fore possibilities that have never been thought of before.

The next play will be The Refund, written by Fritz Karinthy and directed by Krishna S. Murti. In this English play, audiences will see a disgruntled former student demanding a tuition refund from his school, only to see the tables turned on him by his professors. Bound to be interesting, this play will be a joy under the able direction of Mr. Murti.

The day will close with the play Ek April, in Hindi, written by Yogesh Soman and directed by Dilip Parikh. This play will revolve around friendship and relationships and the complexities behind them. What can be matters of fate play out differently when it comes to matters of the heart, the main theme behind this production. It is guaranteed that this play will be emotional and audiences will feel it upon completion.

The second day of the festival, September 16, will start with the spooky Black Game, written by Ambar Hadap in Hindi and directed by Sujata Deshmukh. The play revolves around a character named Sarah, who is mysterious and intriguing. To find out more about her, audiences should come and see this horror suspense thriller (a genre that is rarely seen on stage).

Next up will be the rib tickling Hindi comedy Bure Phase Mehmaan Ban Ke, directed by Rajiv Paul and written by Devraj “Dinesh”. This play will revolve around mistaken identity and is bound to have the audience in stitches throughout.

The festival will conclude with Kanhaiya, a play in Hindi, directed by Ashok Ambardekar and written by Priyam Jani. A high octane drama, featuring a confrontation between a wife and the “other woman”, this is sure to be an interesting watch.