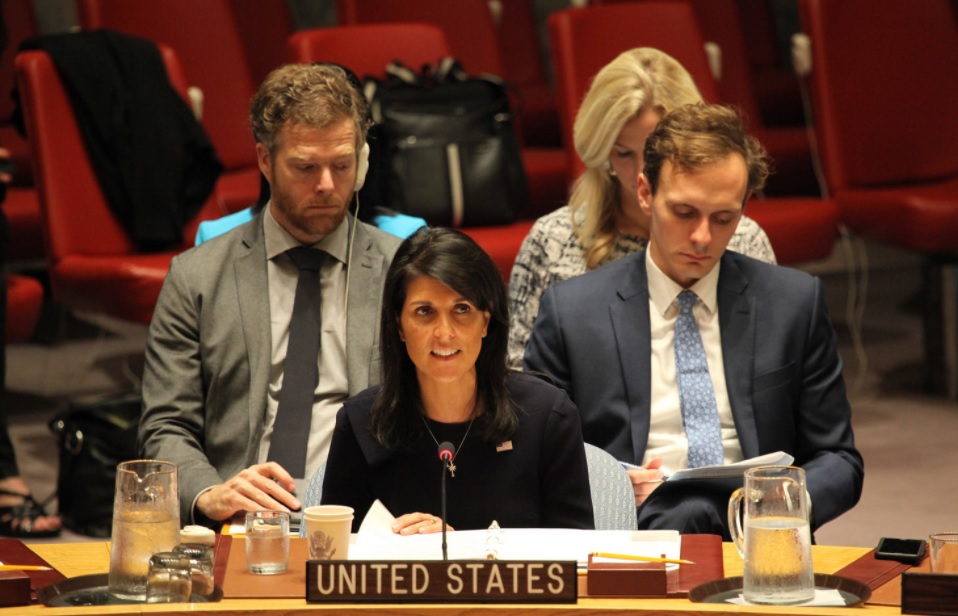 WASHINGTON, DC – In a major blow to the Donald Trump presidency, Nikki Haley, the highest-ranking Indian-American in the administration, has abruptly announced her resignation as US ambassador to the United Nations. She will step down from her post at the end of the year.

Seen as a stabilizing influence in a tumultuous administration, the news has come as a surprise to many in the foreign policy community and beyond who hold her in high esteem. The president himself professes a unique regard for her.

“She got to know the players. She got to know China, Russia, India,” Trump told reporters who packed the Oval Office for the big announcement with Haley. “She knows everybody on a first-name basis, and they like her, except for maybe a couple which is normal. They can’t all like you,” he reasoned adding, “I think, maybe more importantly, they respect her.”

When questioned about the timing of the announcement just weeks before the midterm elections, he replied, “I wanted to do this because Nikki Haley, ambassador to the United Nations, has been very special to me. She’s done an incredible job. She’s a fantastic person, very importantly, but she also is somebody that gets it.”

Trump disclosed that he knew about her decision “to take a little time off” at the end of the year. “She told me probably six months ago,” he informed reporters.

On appointing a successor, he said, “We have a number of people that would very much like to” serve as the US envoy to the world body. “I would say we’ll name a successor within the next two to three weeks, maybe sooner,” he divulged, after consulting Haley, his chief of staff General Kelly and other While House officials.

Haley is a trailblazer – she is the first female and first minority Governor of South Carolina, and she was re-elected to the position for a second term in 2014. When President Trump entered the White House, she became the first-ever Indian American to hold a cabinet-level post. With her departure, senior ranks in the administration will feature even fewer women and minorities.

Addressing the press pool in the Oval Office on Tuesday morning, she squashed any speculation of a potential 2020 presidential bid. “I will say this for all of you that are going to ask about 2020: No, I’m not running for 2020. I can promise you what I’ll be doing is campaigning for this one,” she said gesturing toward Trump. “I look forward to supporting the president in the next election.”

About her departure, she said, “I’m not leaving until the end of the year. My goal is that we make sure everything is in good place for the next ambassador to come in.” She was non-committal on any future position and gave no plausible reason for her resignation.

“Now, I don’t have anything set on where I’m going to go,” she said. “I think that the main thing was I was governor for six years and we dealt with the hurricane, a thousand-year flood, a church shooting, a school shooting. There was a lot. And then, to come in and do two years of Russia and Iran and North Korea – it’s been eight years of intense time and I’m a believer of term limits. I think you have to be selfless enough to know when you step aside and allow someone else to do the job.”

“It was a blessing to go into the UN with body armor every day,” Haley said about her work which entailed defending America on the world stage.

She sounded upbeat and excited about America’s position on the world stage. “Look at what has happened in two years with the United States on foreign policy. Now, the United States is respected,” she affirmed.

“Countries may not like what we do, but they respect what we do. They know that if we say we’re going to do something, we follow it through. And the President proved that”, she said mentioning stern warnings against the use of chemical weapons in Syria, the NATO alliance and other countries paying their share, and new trade deals. “They get that the president means business, and they follow through with that,” she added.

Haley was effusive in her praise of “great friend” Ivanka Trump leading to talk of the First Daughter replacing her at the UN. Ivanka was quick to refute the rumors on micro-blogging site Twitter stating, “I know that the President will nominate a formidable replacement for Ambassador Haley. That replacement will not be me.”

At the press conference, Haley enthused, “I can’t say enough good things about Jared (Kushner) and Ivanka. Jared is such a hidden genius that no one understands,” she said citing the re-done NAFTA deal and the Middle East Peace Plan.

“And Ivanka has been just a great friend,” she said. “And they do a lot of things behind the scenes that I wish more people knew about. We’re a better country because they’re in this administration.”

To her credit, Haley, long seen as a rising GOP star, is making her departure from the Trump administration with dignity and respect in tact.