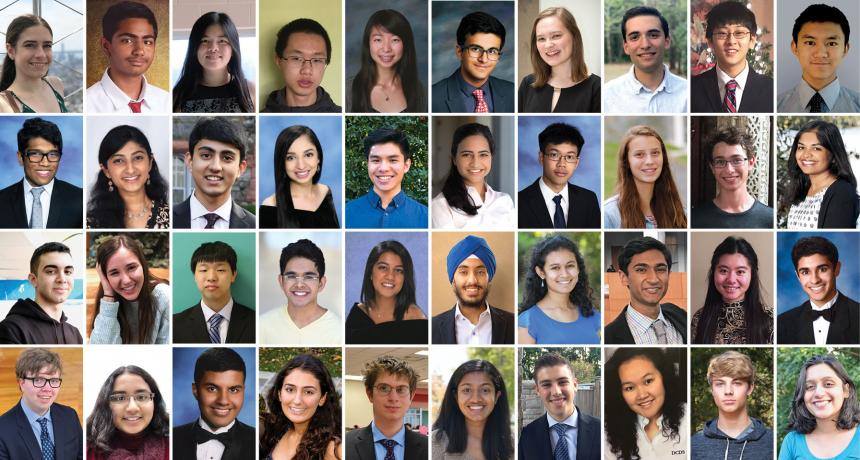 Budding scientists will compete for $1.8 million in awards including top prize of $250,000.

WASHINGTON, DC, January 24, 2019 – The year has just begun and already Indian American whiz kids are in the news for their sharp intellect and brilliant mind. In an eagerly-awaited announcement Wednesday afternoon, it was revealed that 17 Indian-origin high school students are among the 40 finalists in the highly-acclaimed Regeneron Science Talent Search (Regeneron STS) which equates to 42.5 percent of the contestants. It is a staggering figure when one considers that Indian Americans as a whole comprise about one percent of the US population.

The 40 budding scientists will be heading to the nation’s capital where, over the course of a week from March 7-13, they will present their innovative research projects to eminent judges, compete for more than $1.8 million in awards, interact with renowned scientists, meet with members of Congress, and display their work to the public at the National Geographic Society. Winners of the top ten prizes, ranging from $40,000 up to $250,000, will be announced March 12 at a formal awards gala in the historic National Building Museum.

The Regeneron STS is the nation’s oldest and most prestigious science and math competition for high school seniors drawing exceptionally qualified entrants from across the country. In the current edition, the finalists hail from 34 schools in 17 states.

New Jersey Governor Phil Murphy tweeted, “Congratulations to Samuel Ferguson of South Princeton Junction and Varun Kumar of Hackensack on being named finalists in #RegeneronSTS 2019. New Jersey is home to the best and brightest!”

The Fremont Union High School District posted on its Twitter account, “Incredibly proud of Lynbrook student Amol Singh, chosen as one of just 40 finalists in the #RegeneronSTS! Amol will travel to Washington, DC in March and undergo a rigorous judging process, competing for more than $1.8 million in awards”!

“I’m really excited to have some cool conversations, to meet other really engaging people,” finalist Chirag Kumar gushed in a video posted by the competition’s organizer, Society for Science & the Public, on Twitter.

The finalists have attempted to tackle some of the world’s compelling issues through their scientific projects such as building new models to predict refugee migration in Burundi, identifying novel therapeutic approaches to potentially improve precision care for leukemia, and developing an automated 3D printed IoT (Internet of Things) sensor to detect arsenic in groundwater.

The Science Talent Search, a program of Society for Science & the Public since 1942, was formerly known as the Intel Science Talent Search (1998-2016) and earlier was supported by Westinghouse (1942-1997). Regeneron Pharmaceuticals, Inc., a leading biotechnology company headquartered in New York, took on the STS from 2017 and ever since has been giving over $3 million in awards, annually. Founded by STS alumni, the company has committed $100 million in funding over the next decade.

Throughout its 77 years, the criteria for selection in the STS has remained the same: students are chosen from across the nation for their scientific prowess and overall potential to become future leaders of the scientific community.

Alumni of the program have made extraordinary contributions to science and are recipients of over 100 of the world’s most prized honors in science and maths including 13 Nobel Prizes, 13 National Medals of Science, 5 Breakthrough Prizes, 19 MacArthur Foundation Fellowships, and 2 Field Medals.

In a press statement, Dr. George Yancopoulos, President and Chief Scientific Officer of Regeneron, said, “The Regeneron Science Talent Search finalists are our country’s most promising young scientists, and I’m thrilled to congratulate them on this outstanding academic achievement.”

A founding scientist and Science Talent Search winner (1976), he stated, “I will never forget how participating in the Science Talent Search back when it was sponsored by Westinghouse changed my life and gave me the inspiration and confidence to pursue a career in science. I can only hope these amazing young scientists build on their success in this year’s event and go on to use their scientific talents to address the many urgent challenges we face as a society, from climate change to disease.”

About the 40 finalists, Maya Ajmera, President and CEO of Society for Science & the Public, noted, in a press communique, that they “are helping to advance solutions to some of our world’s most intractable challenges.”

“I’m so impressed by the hard work and brilliant thinking these 40 exceptional students have demonstrated in their research projects. I look forward to meeting them in DC, and I am excited to see how their passion for science will impact our world,” she said.

Regarding the research projects of the Indian-American finalists, their innovations are as follows:

– Preeti Krishnamani: Effects of silicon amendments on the concentration and adsorption properties of iron-oxides in rice paddy soils;

– Varun Kumar: Dihydrotanshinone – a pan-therapeutic treatment for chemo-resistance in cancer;

– Ruhi Sayana: Precision care for leukemia – Discovery of novel therapeutics for high-risk ALL via epigenetic and computational transcriptome profiling;