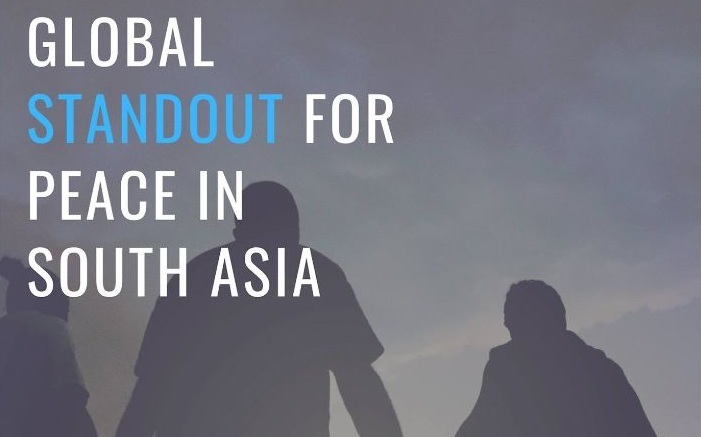 The citizen-led initiative will also be held at various locations in India, Pakistan and the UK.

As India and Pakistan continue their hostilities, there is also a rallying call across the globe to say no to war. Responding to the rising tensions between the two South Asian neighbors, peace activists around the world have come together to launch an initiative called “Global StandOut for Peace in South Asia.”

This Sunday, March 3, men and women across countries, cultures and demography will come together to support a citizen-led initiative and appeal for peace, the organizers said in a press release. The event, scheduled to take place simultaneously in a number of cities globally, was initially started by Indian and Pakistani nationals who want their countries to share good neighborly relations and resolve issues through a dialogue.

The global coordinators of the event are Beena Sarwar, Pawan Bali and Priyali Sur, three journalists and activists from the Subcontinent. Sarwar is the Pakistan editor of Aman ki Asha (“Hope for Peace”), an India-Pakistan peace initiative; Bali is an Indian journalist and filmmaker based in Washington, DC; and Sur is an Indian development professional and filmmaker.

The organizers have extended an open invitation to peace activists everywhere to join from wherever in the world they may be and raise their voice and awareness about the need for peace. The activists also will show solidarity against violence and bigotry of any kind.

The StandOut will take place across various cities in the United States, UK, India and Pakistan.

In the United States, the StandOut will take place on Sunday at the following locations:

Updates on the events are available on the Facebook page of the Global Standout For Peace in South Asia.  The global coordinators, Sarwar, Bali and Sur, can also be contacted via email, globalstandoutforpeace@gmail.com.

Neither India, nor Pakistan benefits from going down path of war: Aparna Pande (February 27, 2019)