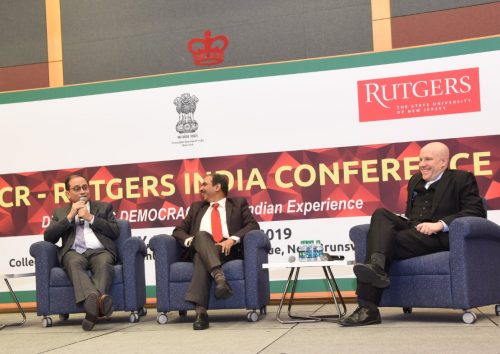 Also, Rutgers becomes the latest prominent US school to launch an India-focused conference.

Rutgers University and the Indian Council of Cultural Relations (ICCR) have signed a memorandum of understanding to establish a visiting lectureship in “Contemporary Indian Studies” at the university.

Also, as part of increasing cooperation between the two entities, the school hosted the first “ICCR-Rutgers India Conference also concluded on February 22 on the topic, “Delivering Democracy: the Indian Experience.”

The agreement on the visiting lectureship comes at a time when there is a need and also a genuine interest in the United States to study and understand diverse cultures.  Back in 2017, the ICCR had established a chair at Rutgers School of Management and Labor Relations. The new agreement is expected to provide short-term deployments of prominent experts in the field at Rutgers University, a New Jersey public university.

RELATED: Binod Khadria starts his tenure as ICCR Chair at Rutgers (May 9, 2017)

The lectureship is likely to draw great interest from the student community at Rutgers, considering an increasing interest in India across the United States and a large concentration of Indian Americans on the East Coast, especially in New Jersey.

On behalf of the ICCR, the agreement was signed by Consul General of India in New York Sandeep Chakravarty, according to a press release from the New York consulate. From the Rutgers University, Dr. Barbara A. Lee, Senior Vice President for Academic Affairs, and Chancellor Dr. Christopher J. Molloy signed the memorandum of understanding.

Chakravarty said he was glad that there is an increased focus on India and Indian studies at Rutgers. He stated that the Indian Consulate can play a role in connecting students from Rutgers to Indian companies in the United States for employment, creating new and diverse avenues for students.

Welcoming the new initiative, Molloy said he was hopeful that Rutgers would further strengthen its partnership with India.

With the launch of the ICCR-Rutgers India Conference on February 22, Rutgers became the latest US university to host a conference focusing solely on India. Elite schools such as Harvard, Wharton, MIT, Columbia and Georgetown University organize similar conferences every year.

Rutgers hopes to make it an annual feature.