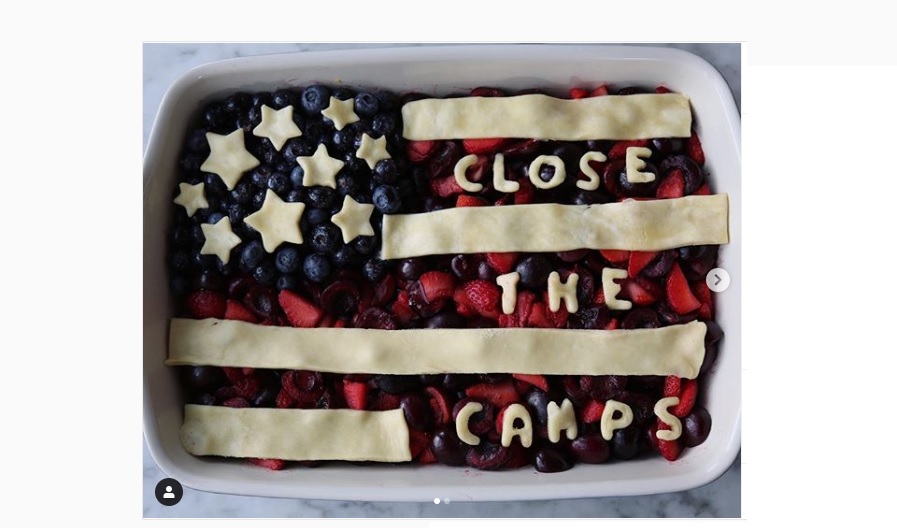 The Indian American celebrity chef baked a stars and stripes strawberry and blueberry pie with the words “CLOSE THE CAMPS.”

As Americans around the country were celebrating July 4th, BBQ-ing and watching fireworks, cook book author and activist Padma Lakshmi used the occasion to send an important message across to millions of her followers on social media.

Retaining the American tradition of baking on the big July day, Lakshmi posted a picture of herself, holding a baking dish with a fruit filled pie, complete with the American flag colors. But the pie had an important message. It read: “CLOSE THE CAMPS” in bold letters. Lakshmi also posted the message on Instagram, where she wrote: “While we celebrate the Fourth, there are refugee families legally seeking asylum in this country being detained and forced to sleep on concrete floors with aluminum blankets and no medical care. This is a stain on our nation and we need to do something now. Contact your representatives tomorrow to demand they #CloseTheCamps.”

Lakshmi included a link to the directory of representatives on her Instagram as well, in an effort to raise awareness for the ongoing refugee situation in America.

Lakshmi, who has been a vocal critic of anti-immigrant and anti-refugee policies of the current administration, through a sweet American tradition, gave a savage message to Americans as well as the authorities who have been continuing with what the humanitarians have been calling cruel policies.

Lakshmi’s innovative message on social media was lauded by her followers and many celebrities. Reese Witherspoon thanked Lakshmi on social media for her message, TV show host Busy Phillips too showed her support and the post has already been liked about a million times on Instagram.