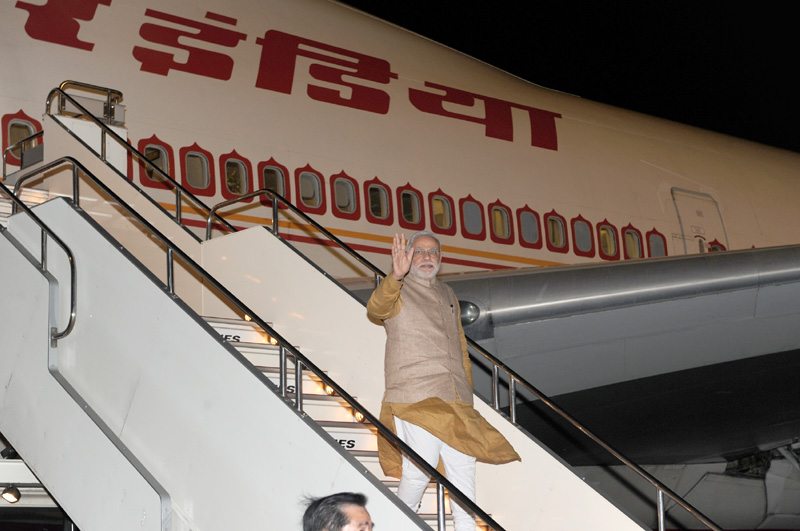 Opinion: Like President Trump, Prime Minister Modi, who is scheduled to visit Houston on September 22, evokes “feelings on the extremities of human capability.”

Texas is a big state and everything here is big, very big, even by the exaggerated standards of America. The affluent and resourceful Indian diaspora, some 250,000 strong, residing in the state has adroitly caught on to this mantra of bigness. Indian Prime Minister Modi (my apologies for not adding Ji, Sir or Sir Ji after every name) will be in the US later in the year for his annual junket that includes attending the UN General Assembly meeting and many hugging and hand-shaking events on business and environment.

During his trip, on September 22, Modi is scheduled to address an estimated crowd of over 50,000 Indians at the fabulous NRG Stadium in my current hometown of Houston. Hosted by the Texas India Forum, this event aptly titled “Howdy, Modi!” in the true Texas friendly spirit is reportedly planned to include a cultural program and an address by Modi. The largest attendance at a previous such program, the much-ballyhooed gathering at New York’s Madison Square Garden in 2104, was a mere 19,000, a number that looked very impressive at the time.

A disclosure is in order here. I am neither a fan, nor a detractor of Modi or his party. As a matter of fact, I am not beholden to any politician. As a student of life and human behavior, I am a mere observer, hopefully impartial. Among the scores of my friends and family, both here in the US and in India, on and off Facebook, there are genuine intellectuals, very well-read, highly educated men and women, many with amazing professional accomplishments. What is interesting is that almost all of them either love or hate Modi with at least as much passion as with which they love or hate Trump. These two elected leaders of two of the greatest democracies in the world evoke feelings on the extremities of human capability.

And yet, based on the enthusiasm and dedication of the organizers, the preparations being made on a mega scale weeks before the event, and the members of the Indian community falling over each other to register and acquire passes to attend, one would never imagine that Modi is such a controversial figure that he seems to be at least in India, in the news media and with the fast-talking political pundits that seem to be scattered around all over the country. Among most of the Indian diaspora here, his popularity seems to be boundless and the anticipation, sky-high. For them, Modi is the real thing. And his visit six weeks from now is going to be nothing less than the Second Coming of Christ.

This will be Modi’s first visit to Houston as India’s Prime Minister. But it is actually his second visit. Many years ago, he had visited Houston as a general secretary of the BJP to take part in the inauguration ceremony of the Swaminarayan Temple. My interaction with temples anywhere is confined to appreciation of their history and architecture. Not with what is inside. With the Swaminarayan Temple here in Houston it is a little more than that. I go there mainly to buy some Indian sweets and snacks from their excellent kitchen/shop Shayona anytime I have to entertain Desi guests at home. The place is a stronghold of Modi loyalists, aka “bhakts”. If you are not averse to a little eavesdropping, you can easily feel the pulse of the diaspora here. In my last visit to Shayona just a few days ago, I picked up the following. “Modi Ji is the best PM India has ever had”. “Modi Sir is God’s gift to India”. “Modi Sir ji is the second avatar of Swami Narayan Ji”. This is very reminiscent of the American evangelists proclaiming that “God wants Trump to be the president.”

The thoughts of the Second Coming (of the Indian Christ) do not seem far-fetched.

The fact is that very little of this is about Modi. It is all about the Indian community in America. It is about us. It is about celebrating ourselves for the success of Indians in this land of opportunity. It is about feeling good about ourselves. It is about showing the world that we are not any less than others. We are affluent. We can do it. We too have strong and charismatic leaders. We have arrived. We can carry out big events.

To me, it is really a tribute to the greatness, the openness and diversity of America.

Based on the Madison Square Garden experience five years ago, one can very well anticipate the happenings at Modi’s September 22 event in Houston. Indeed, 50,000 plus will attend as adertised. About 50 of them will be white Americans – mostly City, State and Federal government officials. Posters and banners and flyers of all kinds with Modi’s pictures will inundate the stadium. Bollywood songs and chants of “Modi! Modi!” will fill the atmosphere as videos of Modi’s phenomenal rise from his humble beginnings to global leadership will be streamed on all screens and monitors. Indian ladies in elegant colorful sarees and men in assorted outfits from formal suits to zabba/pyjama with Modi style half jacket to fashionably torn jeans and sneakers will put on top of whatever they are wearing T-shirts with Modi pictures given out at the gates. All traditional concession stands at NRG will be converted to serving “veg only” food with Samosa, Pakoras and Maharani and Maharaja burgers featuring Aloo Tikkis inside. No all-beef hot dogs and burgers. There will be Masala Chai to drink, no beer.

In his speech Modi will repeat his favorite pledges of “Minimum government, maximum governance,” and “Red carpet, not red tape, to foster growth.” He will talk about his intention “to do big things for small people,” and “to promote Indian economic growth, clean up the polluted Ganga Mata and improve the lot of the country’s poor and disadvantaged.” The ecstatic Indian crowd, men and women, old and young, will laugh and roar, holler and clap.

As it always is at such events, outside the stadium, there will be a small group, well-controlled by the police, demonstrating against lynching and hatred and beef ban and Kashmir policy and the primacy of Gou Mata and Gomutra.

Nothing will really change. Not in India. Not in America.

The writer is a Sugarland, Texas,-based author who has written several books such as Mumbai to Stockholm via New York and The Four Ls: A Memoir.He constantly writes about the social, economic and cultural lives in India and America and how the cross-cultural connects often intersect immigrant lives.