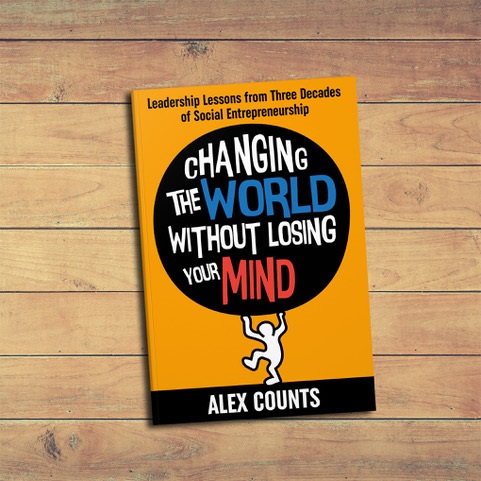 Alex Counts is the founder and former President and CEO of Grameen Foundation, a global nonprofit that fights poverty and hunger, especially among women. The Cornell University graduate spent some time as a Fulbright scholar in Bangladesh, where he trained under Prof. Muhammad Yunus, co-recipient of the 2006 Nobel Peace Prize and the founder and managing director of Grameen Bank. In his latest book Changing the World Without Losing Your Mind: Leadership Lessons from Three Decades of Social Entrepreneurship (Rivertowns Books, 2019), Counts talks about his experience in the nonprofit world. Following are excerpts from the book.

MY LONG LABOR DAY WEEKEND a few years back was turning out great—or so I thought.

On the train coming back home from a business trip to New York City on Friday evening, I’d come up with a plan. I’d spend Saturday on a mix of personal projects, including some related to my board service with an organization combating climate change.

I’d spend Sunday doing work for my employer at the time. Then I’d spend Monday, Labor Day, working on this book. In between these activities, I’d intersperse cooking, listening to live music, ample sleep, practicing new habits I was trying to develop, reading, exercising (including a ten-mile run on Sunday), and watching as much of the U.S. Open tennis tournament as time permitted.

By the time I woke up on Monday morning, my plan was working well. I’d made some modest progress on a few thorny issues I was dealing with at work, and I’d enjoyed a conversation with my friend Karen O’Malley, which included making plans to go out dancing with her in New York a few weeks later.

ALSO READ: How to change the world without losing your mind: Alex Counts (September 17, 2019)

But one particular issue hung over me. If I could get it resolved by Monday morning, it would make my weekend nearly perfect. For the last three weeks, I’d been conducting difficult negotiations about extending the contract of a colleague whom I’ll call Vikram. He was our India country head. I’d offered him a generous package on Thursday morning, and he’d asked for some time to think it over. I felt as though we were just hours away from an agreement.

As I prepared my Monday morning tea, I turned on my computer to check my emails. I figured that a message from Vikram accepting my offer, or at worst making a reasonable counteroffer, might well be waiting for me.

Sure enough, there was a message from Vikram. It was a resignation—followed shortly by a second message from Vikram saying that one of his top deputies, a talented man whom I saw as a possible successor to him, had also resigned. “The timing isn’t great,” Vikram remarked. I’ll say!

What to do next? How to deal with these two unexpected body blows? My heart raced, and I began pacing around my home anxiously.

I tried to steady myself. The night before, an article in the New York Times had caught my attention. A pull quote describing it read, “The tech world has branded workaholism as a desirable lifestyle choice.” In its first paragraph, the article announced, “An entire cottage industry has sprung up [in Silicon Valley], selling an internet-centric prosperity gospel that says that there is no higher calling than to start your own company, and that to succeed you must be willing to give up everything.” Later, a social worker whose patients included many stressed-out tech workers, quoted one of her clients as having told her, “The expectation is not that you should work smart, it’s that you should work hard. It’s do, do, do, until you can’t do anymore.”

Every line in the article reminded me of myself when I fell back into old habits that had ruled me earlier in my career—except that I was a nonprofit leader, not a high-tech executive. Like virtually every area of human endeavor, the higher reaches of the do-good professions are highly competitive, filled with achievement-oriented people who push themselves and their colleagues hard. However, unlike technology leaders or their counterparts in finance, consulting, and similar fields, humanitarian leaders get neither bonuses nor stock options. Instead, they’re generally expected to live rather austerely in order to show donors that their money is “going to the cause.” At the same time, they are also supposed to be entirely comfortable around people with unimaginable wealth.

In place of comparable material benefits, leaders like me are supposed to derive some kind of spiritual benefit from working to right the world’s wrongs. However, for more than a few leaders, that promise rings increasingly hollow as their careers progress.

They see too many projects bog down, too much talent flee to greener pastures, and too many supposedly successful initiatives turn out, after the passage of time, to look more like houses of cards. All the while, these leaders are supposed to project optimism and self-confidence in their ability to achieve rapid progress on vexing societal problems in order to keep their jobs, satisfy and motivate colleagues, secure positive media coverage, and make progress in their careers.

Over the decade or so leading up to my Labor Day surprise, I had figured out, to a degree that I found surprising and encouraging, how to avoid the trap of being a stressed-out, workaholic humanitarian professional. But it was not always that way.

Earlier in my career, getting the resignation letter of two people I relied on and whom I had trusted to stick it out with me would have likely pushed an already stressed-out Alex Counts into the dysfunction of panic, blame, anger, and a massive overreaction.

Of course, those reactions could—and often did—make the problems I was grappling with worse. But through a painstaking process I undertook in my thirties, I had learned how to destress myself, lead a more balanced life, and deal with setbacks in a much more constructive way.

After reading Vikram’s email, I decided not to obsess about my lack of a plan to deal with my sudden workplace crisis. Channeling the wisdom of Alcoholics Anonymous, a fellowship to which I do not belong but still admire, I focused instead on simply doing “the next right thing,” with the confidence that a comprehensive response would emerge over time. I informed my board leaders, which had the effect of causing some smart people to partially own what until that moment had felt like my problem—and with that ownership came the responsibility help me solve it. (By contrast, earlier in my career, I would have been tempted to hide the problem for as long as possible in order to retain my autonomy in trying to fix it—a risky and usually ineffective approach.)

I thought about whether there was anything else I had to do immediately, and realized that there was not. That meant it would be best not to do anything rash that could make things worse, such as writing a caustic email. I told my wife, Emily, so she could be aware of my state of mind and commiserate with me a bit about this unhappy development. I put off for a few hours deciding whether I was going to work on my book, then ended up writing the first draft of this section. As a way of centering and distracting myself, I did a few things to reinforce habits I was trying to develop to improve my physical and mental health: I ate a piece of fruit, wrote in my journal about ten things I was grateful for, and flossed.

I wrote a note to a friend who was facing a personal crisis, mentioning that I had come across the birthday card she had written me earlier in the year and telling her how it had touched me. I sent a section of my book manuscript to a professional colleague now running a large humanitarian organization who had expressed interest in reading it. I ran a few errands, which gave me a small sense of accomplishment during the early part of the day. While in the grocery store, I surveyed the people working the checkout counters, whom I had developed some affection for over the years, and reminded myself how fortunate I was to do work that I loved most of the time while being reasonably well paid for it.

Most important, I took a deep breath and reminded myself of one of the most important things I had learned over three decades as a professional and as a human being: that bad news or setbacks often end up being much less severe than they initially appear, and sometimes they end up being unexpected blessings.

Within a few hours, I’d steadied myself and was moving forward with a plan to deal with Vikram’s departure as well as all my other work priorities. I felt a sense of accomplishment, momentum, and inner calm. Rather than allowing this surprising setback to destabilize or even paralyze me for a day or more, or prompt me to lash out and burn bridges, my approach that weekend allowed for a solution to emerge. Within a few weeks, the board and I figured out how to keep Vikram in the organization in a position he was happy with, and that worked well for me, too.

As a nonprofit leader, you’ll inevitably face moments of unexpected difficulty, setbacks, even crisis. These moments will test your judgment, your strategic instincts, and your decision-making skills. But the first challenge they’ll pose will be to your sense of equanimity, purpose, and self-discipline. If you can remain calm when unpleasant surprises hit, resisting the temptation to let powerful emotions shape your response and dictate your behavior, the chances that you will make smart decisions that will enable you to weather the storm—and perhaps even turn it into an opportunity for positive change—will be far greater.