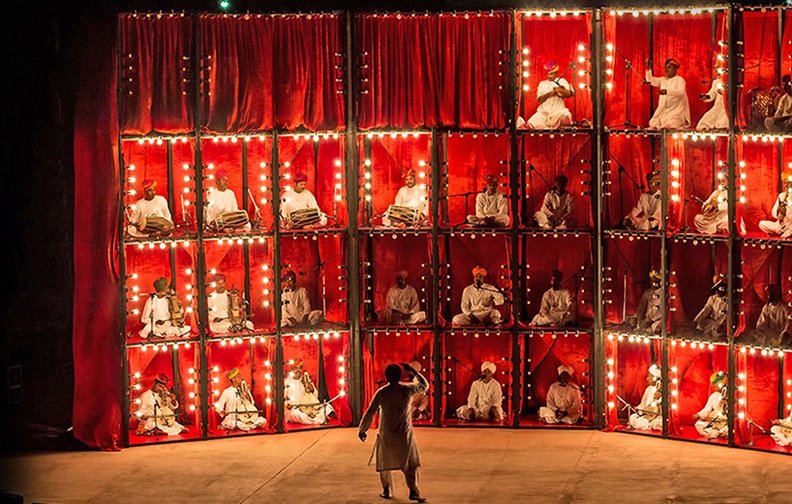 If you are in New York City this weekend, do yourself a favor and go check out The Manganiyar Seduction, currently on show at the Lincoln Center.

A musical dance drama from India’s western state of Rajasthan, The Manganiyar Seduction, would surely go on to be one of the finest performances you would see for a long time to come.

A part of the ongoing White Lights Festival at the Lincoln Center, it brings together more than 40 singers and instrumentalists from the deserts of Rajasthan performing traditional Manganiyar music in an astonishing audio-visual feast.

The musicians are seated on the stage in a four-story bank of small lighted pods, each pod is occupied by a single performer who is illuminated whenever his voice or playing joins the extended piece of music being performed.

As the ensemble grows in number and the sound gathers momentum, a dramatic and astounding build-up of musical instruments and voices is created as three generations of the Manganiyar community take you into a simply surreal world.

Conceived and directed by Roysten Abel, the beauty of the show is that it takes you by surprise. It begins in total darkness with faint lights and the stunning sound of Khamacha, a Rajasthani stringed instrument greeting you.

But wait, what unfolds is even more ephemeral as performers dressed in white and Sufi couplets in the background begin filling up the auditorium.

The performance, not exactly a chorus rises as one performer gives way to another building a crescendo.

Manganiyars are a formerly nomadic group of people who inhabit the desert state of Rajasthan. The tribe has hybrid faith themselves. They sing Sufi kalams, believe in Allah, but they also believe in Hindu gods and sing in their praise.

The performance lasting a little over an hour also has the reverberative beats of dhol and dholak, two headed drums from the Indian sub-continent.

Anybody who is well versed with India’s rich culture of dance would agree that the performance is a slice of plural India unlike anything else. A must see, for all!