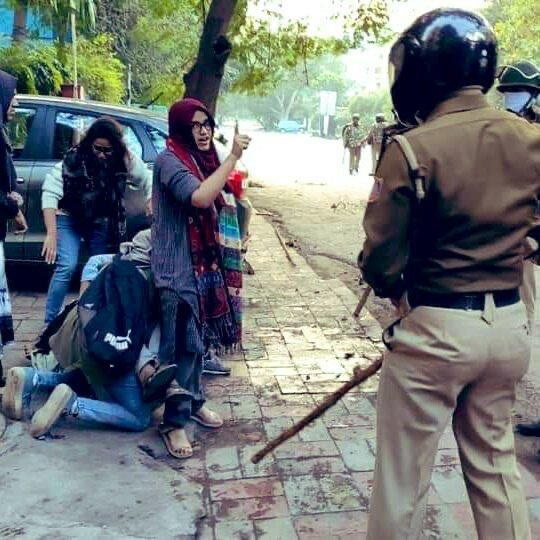 Students at forefront of agitation against Muslim “discriminatory” law.

Violent protests continued Tuesday across India including in the national capital of New Delhi against a new law offering citizenship to non-Muslim illegal immigrants from Pakistan, Bangladesh and Afghanistan facing religious persecution.

Students have been at the forefront of the opposition agitation against the Citizenship Amendment Act (CAA) calling it “discriminatory” against the Muslim community. India is home to more than 200 million followers of the Islamic faith.

At least 22 universities have witnessed protests with students from IIT Bombay, IIM Ahmedabad, IISc Bangalore and Mumbai, Delhi, Madras and Jawaharlal Nehru Universities coming out in support of the country-wide agitation.

Students at Jamia Millia Islamia University, a Muslim minority institution, in the capital have been protesting against the the new law for the past three days.

Jamia had turned into a battlefield on Sunday with police entering the campus and using force to control what it called a “war-like situation” after incidents of violence and arson.

However, after their protests Jamia students were seen cleaning up roads in pictures doing the rounds on social media.

From Guwahati in Assam in eastern India to Chennai in Tamil Nadu in southern India, students have staged protests in more than 15 cities against the police action and arrest of students at Jamia.

Passed by the country’s Parliament on Dec 11, the Citizenship Act would grant fast-track Indian citizenship to Hindu, Sikh, Parsi, Buddhist, Jain and Christian illegal immigrants from Pakistan, Afghanistan and Bangladesh, who have lived in India without documentation for six years.

India’s northeastern state of Assam, which has opposed such a law for over four decades fearing overwhelming linguistic change, is in the forefront of protests. So far, four people have been killed by police gunfire in the state.

Meanwhile, India’s Supreme Court Tuesday declined to set up a committee of a retired apex court judge to inquire into the incidents of violent protests in different parts of the country against the Citizenship Amendment Act (CAA) and said that such panels may be appointed by the high courts concerned.

Speaking at a rally in Jharkhand state, he said the Act neither takes away the rights of an Indian nor harms him in any manner.

“Indian Constitution is our only holy book. I appeal to youth in colleges to debate our policies, protest democratically,” Modi said.

Indian Home minister Amit Shah, who had piloted the bill in parliament, said Tuesday of India’s 300 plus universities, including private universities, “protests were held in only 22 universities.”

“Of these 22 universities, in four universities (including Jamia Millia Islamia University and the Aligarh Muslim University) the protests were more serious,” he said at a TV forum in New Delhi.”

Speaking at India Economic Conclave in Mumbai later Tuesday, Shah said there was nothing “anti-minority” in the legislation.