Think beyond openness as growth strategy in age of protectionism, suggests Deepak Nayyar. 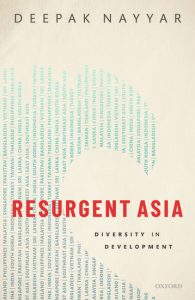 The thesis put forward by Kenneth Pomeranz on Great Divergence as well as the database of the Maddison draw attention to the declining share of Asia in the world economy, in particular, that of  India and China, from the pre-industrial revolution highs till the ’50s.

In fact, the project of colonialism and the initial stirrings of industrialization in Europe, which generously counted on the resources from the periphery, saw the subjugation of Asia and the other economies in the developing world to the rising West.

Deepak Nayyar explores as to how this process of great divergence has been reversed in the light of the development experience of 14 Asian economies since the fifties. He categorizes these economies into four sub-groups notwithstanding the diversity of the economies within the sub-groups.

Nayyar places his study in the historical background of Gunnar Myrdal’s Asian Drama, which on the one hand was pessimistic of the ability of the markets to work in Asia, as against in Europe, and on the other, was deeply cynical about of the ability of the states to successfully intervene in the context of their being ‘soft states.’

In fact, he argues those decades which went by saw the ability of the states in developing Asia being able to design policies which could influence the policy outcomes in a favorable manner.

Nayyar explores with anecdotal and empirical evidence as to how the states which had a mistrust on the flexibility assumptions of neoclassical economies, stuck to the heterodox policies, both with respect to fiscal intervention as well as utilization of instruments of trade policy, with a perceptible impact on industrial performance.

In fact, over the years, Myrdalian pessimism of Asia did not hold to be any more valid. Contrary to the argument sometimes put forward by the Bretton Wood twins, that Asia grew through policies designed  by the precepts of  the Washington Consensus, state intervention invariably played a pivotal role across states.

Nayyar in the line of  other writers in this tradition like Alice Amsden  and Amiya Bagchi  draws attention to the role played by tweaking policies in the manufacturing and industrial front by the dirigiste regimes as well as by restrictions imposed  by economies in the form of capital controls.

In the Indian case, he draws attention to the planned process of industrialization with large investment by the state during the Second Five Year Plan, and the Patents Act of 1970 and it’s focus on process patents, which gave a stimulus to India emerging as an important point of pharmaceutical production in the developing  world.

The stimulus received by the software and services sector through the protracted strategies  of setting up of software technology parks as well as the tax concessions offered on their export earnings is given due emphasis.

However, in this era of trade surveillance, one wonders whether developing and emerging economies would have access to these tools of intervention. The series of disputes, in particular with respect to solar panels at WTO is illustrative in this regard.

It’s important to note that a substantial share of the total increase  in Asian share has been on account of the rise of China as the factory of the world.

The latest trends reveal that 93.7 percent of the merchandise exports of China are from the  manufacturing sector, and, it accounts for 17.5 percent share of the total world manufacturing exports.

But the reversal of the momentum on world trade raises issues with respect to the sustainability of the process of the shift of labor force from agriculture to higher productivity activities. Here again a battery of interventionist policies is desirable.

It’s to be noted that the share of FDI inflows  as a share of gross domestic capital formation accounted for more than 10 percent only in three of the 14 economies in Asia, even in the 2009-16 phase, validating the argument that at best capital inflows had played a supplementing role rather than a substituting role.

Also some of the Asian economies despite their low per capita incomes in comparison to advanced economies have been witness to rising stock of outward foreign  direct investment.

Though the book’s title sounds very optimistic about the fortunes ahead of the Asian economies, Nayyar airs his concerns too. It is pertinent to note here that notwithstanding the rising shares of China and India in the global economy, in per capita terms, the difference between the developing economies as well as the advanced economies continues to be a reality.

Though he argues that the environment of growth was facilitated by the openness with the favorable and buoyant  growth in trade in the first decade of the current century giving it a momentum, the steep decline of exports as a share of GDP in the period from 2010 to 2016 is a matter of serious concern.

The Asian economies, which have been beneficiaries of policies based on control on capital flows, have been liberalizing capital flows in the period after global financial crisis period, resulting in a large inundation of capital flows.

The data from BIS testifies to same with respect to Latin America as well. And, there are other regions like emerging Europe which has been imposing new restrictions, resulting in a large decline in capital flows to those regions.

Are these economies in emerging Europe trying to increase their share in the global value chain of production by resorting to these strategies? The economies of Asia should be wary about the vulnerabilities to which they would be exposed to in this process of “capital flows conundrum”, and the risks of their being relegated to what Dani Rodrik characterizes as middle income trap.

Possibly the best lesson which Nayyar’s work offers is that the Asian economies have much to learn from their own experience. They ought to address the issues concerning widening distributive disparities in growing Asia to which Branco Milanovic has drawn attention to as well as think beyond openness as a strategy of growth in the current climate of rising risks from the forces of protectionism worldwide.

Written in a highly lucid style, this book offers a comfortable read even for non-specialist scholars with interests in the changing dynamics of the global economy as well as the relative position of Asia in the same.