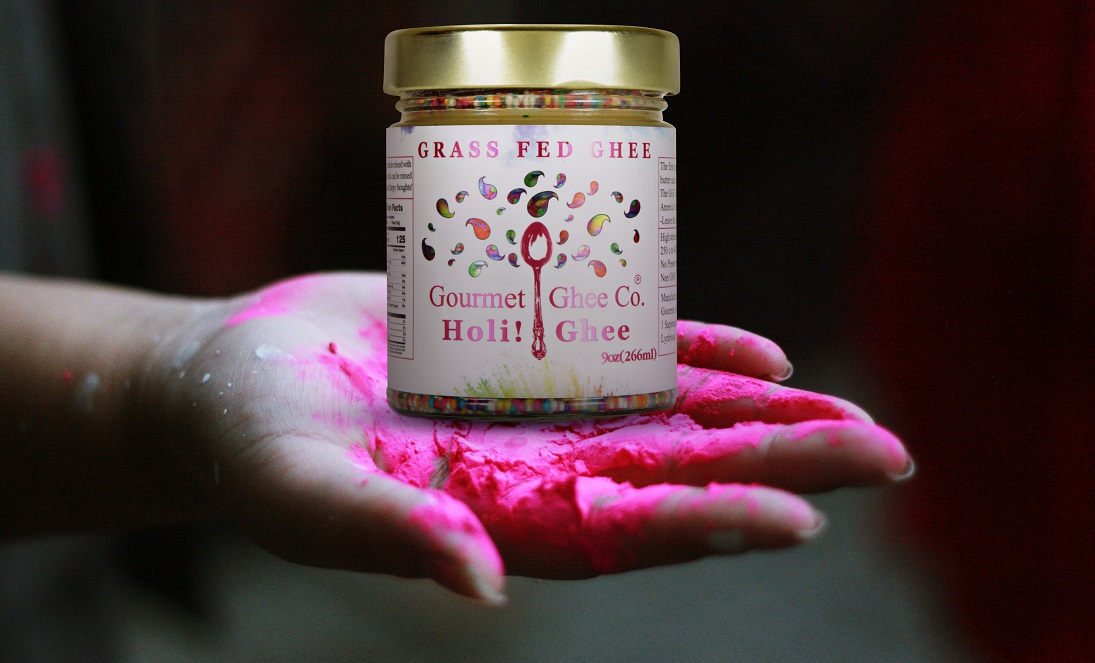 This Holi, Indian American entrepreneur and owner of New York based the Gourmet Ghee Company, Nazia DeFrank had a brilliant idea to showcase the Indian love for food – regardless of faith. DeFrank who runs the gourmet food company along with her Italian husband just launched Holi Ghee — a carefully crafted ghee flavor with rainbow crunchy sprinkles and a sweeter taste – just right for the spirit of Holi, the Hindu festival of colors celebrated in the first week of March.

DeFrank’s gourmet company has been promoting the Indian goodness of ghee or clarified butter in the West for some time now. Being the first Indian food product company to have been included in the Oscar and Emmy awards gift bags, DeFrank knows quite a bit about inclusion and how food connects individuals across cultures and continents. She is among the first and only India inspired food companies to also find a place in the gift bags at New York and Paris Fashion Week, thus feeding global fashionistas a spoonful of Indian ancient wisdom of Ayurvedic food.

On why DeFrank chose to come up with Holi Ghee, this season, she says, “Holi Ghee is a specialty flavor we made to pay homage to my Indian roots, also with the turmoil going on I felt it was important to show the one thing Indians have in common is a love for food. Being a Muslim business owner, I still have ties to back home and love for my country.” DeFrank who originally belongs to Mumbai commenting about the current tense political situation in India says, “I do not have love for what (PM Narendra) Modi is doing but I do feel the comradery Indians share is stronger than any biased law. Generations are changing, times are changing and God willing India will come on board and realize this. Muslim or Hindu we belong to India and India belongs to us all.”

On the unique flavor and what does it taste like, DeFrank says, “This flavor was inspired by Holi, the festival of colors. I want to show that through my ghee. We used nonpareils which are rainbow crunchy sprinkles, this ghee is on the sweet side with a rich spreadable taste and texture. I wanted this ghee to appeal to kids especially, to get into the spirit of the holiday, and to use all year around not just for one particular day. The taste is very smooth with a soft crunch, it can be used as a spread in baking or butter coffee.

A proponent of inclusion DeFrank made it a point, to call her products Ghee, in the original Indian name and not dilute its Indian-ness by calling it clarified butter for an easy acceptance in the West.

With her new Holi ghee offering she is hoping to melt some more hearts and differences and inspire people to bond over food.

The product is available on Amazon and at www.gourmetghee.com.