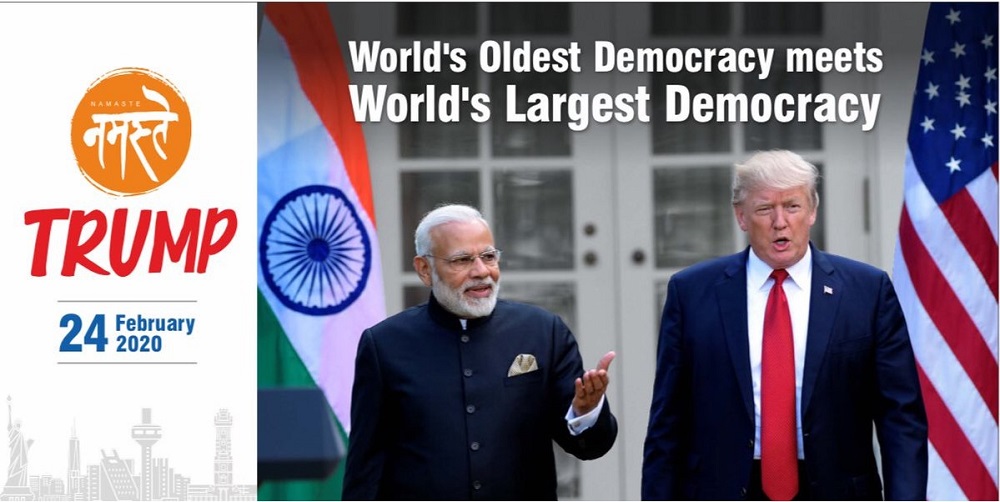 Both President Donald Trump and Indian Prime Minister Narendra Modi need an extravaganza like “Namaste Trump” for their own reasons. Diplomats have conjured up strategic reasons for the visit and have also lined up a few deals, including defense purchases to be signed.

However, Trump made his priority very clear at the Andrews Joint Base on February 18, when he said that he looked forward to the exciting possibility of “seven million people” lining up to greet him “between the airport and the event” at Motera, as promised by Modi.

He also said that the trade deal on which “we’re not treated very well by India” could wait. Indian Foreign Secretary Harsh Shringla said that Trump’s motorcade would pass through a mini-India with 28 stages representing India’s cultural diversity.

Trump would like to seek more “Brown” votes during the November 2020 presidential elections, as The New Yorker indicated, despite his triumph in the impeachment trial. A Reuters/Ipsos poll released on February 19 found a pro-Democrat, anti-Trump “Blue Wave” spreading in urban areas.

The poll found “Certain” voters rising by 9 points in urban communities through political activism. If this trend continues, it would offset the pro-Trump rural conservative votes that had helped him narrowly score over Hillary Clinton’s urban support in 2016.

He is unlikely to forget that he received 2.9 million fewer popular votes than Hillary Clinton, but was a fortuitous beneficiary of the “Winner Takes All” system in “Electoral College”, a provision he had criticized in 2012.

A recent New Yorker article, “How Milwaukee could decide the next president” supports this public poll conclusion. Black Leaders Organizing for Communities (BLOC) are lobbying with African-Americans in Milwaukee to turn a “non-voter” into a “voter” by intense ground action, it suggested.

This is something like what veteran Indian American leaders like Dr. Joy Cherian and his colleagues did in 1983 by establishing the Indo-American Forum for Political Education (IAFPE) for educating Indian Americans to increase their voting ratio.

Last year on September 22, Prime Minister Modi helped Trump in recognizing the potential of four million Indian Americans through the “Howdy, Modi” event in Houston. Trump’s eagerness in attending the “Namaste Trump” in India is because of the possibility of converting the grand Motera show into Indian American votes.

However, there are problems, mainly created by the Bharatiya Janata Party (BJP)’s doctrinal implementation of statecraft, which has received adverse publicity in the US and European media. These are over suppression of human rights in Kashmir and for new religion-based citizenship rules.

US media has reported large number of Indian Americans demonstrating in 30 American cities on  January 26, the Indian Republic Day, against Citizenship Amendment Act (CAA) and National Register of Citizens (NRC). Seattle and Cambridge City councils have passed resolutions. The  public mood in India could be guessed by the February 8 elections to the Delhi State Assembly, which saw massive defeat of the BJP, which ran a very divisive campaign over CAA.

In this background, Modi would not be averse to utilizing the spectacular protocol and pageantry associated with the high-level Trump visit for diverting international and domestic attention from Kashmir and CAA protests. By now, it is clear that the Modi government has painted itself into a corner by not handling overseas criticism in a mature manner after the August 5, 2019, crackdown in Kashmir, where senior elected representatives continue to be in detention.

The same aggressive policy was followed while facing overseas CAA protests. By overreacting to such criticism, government leaders have gone to the extent of ridiculing elected representatives in the US and UK, who hold contrarian views. They forget that the basic aim of diplomacy is to convert the unconvinced, and not to bully them, like how Hermann Goring unsuccessfully tried in Germany in 1933.

The first instance of mishandling US Congress was last December when Indian External Affairs Minister S. Jaishankar, who was in Washington DC for the “2+2 talks,” chose to cancel a meeting with the Democrat led House Foreign Affairs Committee. He objected to the presence of a Representative of Indian origin, who had on December 6 co-sponsored a bipartisan resolution in Congress, asking India to uphold human rights in Kashmir.

ANI, the favored Indian media agency of the present government, tweeted the minister’s reaction on December 20: “I have no interest in meeting her.” This action betrayed scant respect for the US governmental system, which gives parallel importance to their legislative branch along with the executive branch.

The second instance of hyper sensitivity was on February 16, when the official spokesperson rejected the reported offer of mediation on Kashmir by UN Secretary General Antonio Guterres, while on a visit to Pakistan.

Had the spokesperson read the official text released on February 17, he would have realized that UNSG had also called for the implementation of UN Security Council resolutions, which had asked Pakistan to vacate from “Occupied Kashmir.” The secretary general had only said that UN mediation would arise “only when accepted by both sides”.

However, the most discourteous act was the deportation of British Labor MP Debbie Abrahams, Chairperson of the All Party Parliamentary Group on Kashmir in British Parliament, on February 17. It was described by a leading Indian daily as “whimsical,” since it has turned the spotlight back on New Delhi’s Kashmir policy, which it wanted to avoid.

The Modi government should realize that its foreign policy cannot succeed, if it pays attention only to President Trump, or British Prime Minister Boris Johnson and not to their legislatures.

(Vappala Balachandran is an author and columnist on security affairs. His third book “Keeping India Safe-The Dilemma of Internal Security” (Harper Collins-India) was launched by The American Bazaar and the India Initiative of the Georgetown University at the National Press Club, Washington DC on September 7, 2017.)