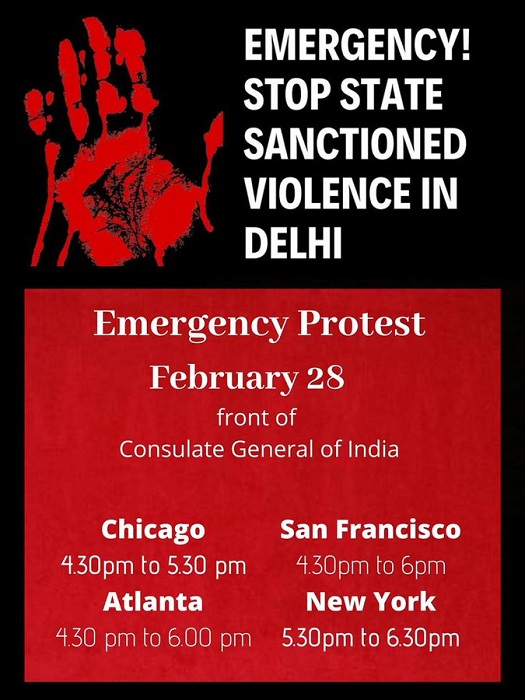 Everyone expected lavish pictures of state banquets and diplomatic meetings coming out of India as President Donald Trump embarked on a much hyped trip to the country.

Instead the world was shocked to see images of gruesome killings and rampage on roads in India’s capital city of Delhi as clashes erupted between opponents and supporters India’s controversial Citizenship Amendment Act (CAA).

Reacting to the mindless sectarian violence in India, a group named South Asian Students Against Fascism has called for protests under the banner of “Emergency! Stop State Sanctioned Violence in India” in four major US cities.

Students will gather in front of Indian Consulates in Chicago, Atlanta, San Francisco and New York to show their solidarity for religious unity in India and raise a voice against killings in the country.

The organising group calls itself a movement of South Asian students who are together in the fight against fascism, religious intolerance and polarization.

Formed in response to the police violence on protesting university students against the CAA, the group says that it stands in solidarity with student movements demanding intellectual and academic freedom to voice their dissent.

The students also say that since being in the US they are geographically removed from the situation on the ground, they remain committed to increasing the visibility and coverage of the anti-fascist movements occurring in South Asia.