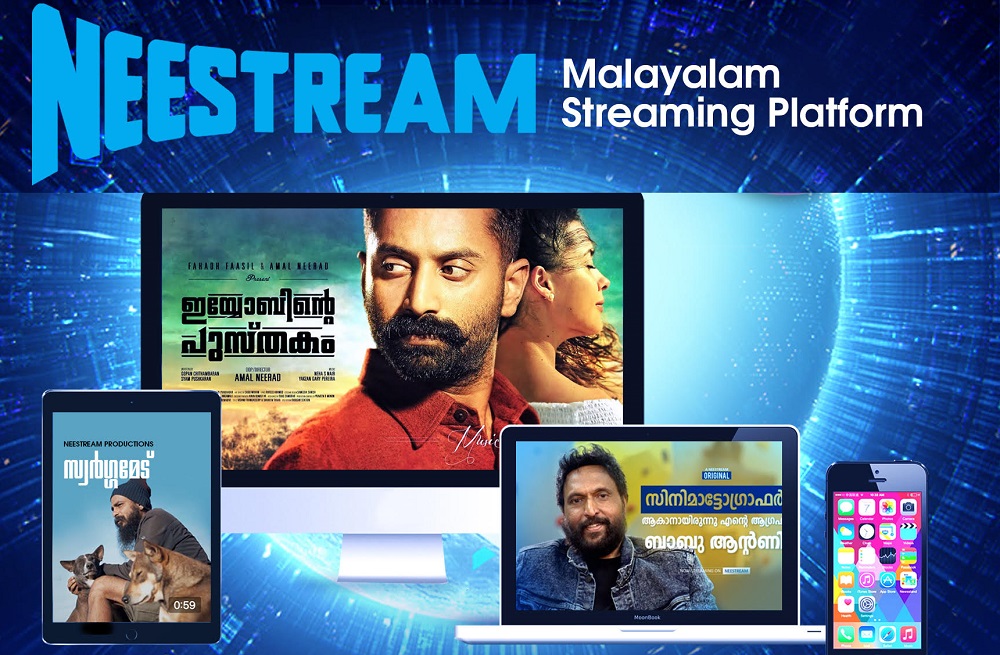 Basic, free subscription is available worldwide; Neestream premium service is only available in the United States and Canada for now.

WASHINTON, DC: Neestream, a new streaming platform that caters to the Malayalam-speaking population across the globe, has been launched.

The premium service of Neestream, which includes hundreds of Malayalam movies and a number of news channels, is currently only available  in the United States and Canada. The basic service, containing original Neestream programs, is available worldwide, and is free.

“Per capita, Malayalees consume more news and entertainment content than most linguistic groups in the developing world,” said Javad K. Hassan, Chairman of the JKH Holding Co., a McLean, Virginia, -based global conglomerate of companies operating in a number of technology and service areas.

“Our objective with Neestream is to give Malayalees in India and around the world the best of Malayalam entertainment and current affairs.”

Hassan, a former top executive with IBM and AMP, pointed out that global over-the-top media players Netflix and Amazon, as well as Indian market leaders Hotstar and Zee5, are investing heavily in content in Malayalam and other South Asian regional languages.

While the U.S. streaming giants have an advantage in resources, Hassan said Neestream intends to compete with them. “As an operation focused solely on the Malayalam market, we hope we will be able to make an impact by bringing the finest and most informative content to the consumers.”

Asif Ismail, CEO of Neestream, said the streaming platform will focus on unearthing talent and creators in Kerala and from within the global Malayalee diaspora.

Ismail, who is also the publisher of The American Bazaar, said that, although the premium service is initially available only in North America, “eventually, it will be available globally.”

The platform gives premium subscribers an unlimited access to hundreds of movies, Malayalam news channels and original content. One can also watch major Malayalam TV channels around the clock.

For subscribers in the United States, the platform also offers some English content in a category called Neestream Americas.

Neestream subscriptions can be accessed at wwww.neestream.com. The standard subscription is free. The premium package costs $18 for 6 months and $29.99 for a year in the United States and Canada.

Neestream is also available on Roku, Chromecast, iOS and Android. Soon, it will also be available on Amazon Fire as well.

The aim of coming up with a dedicated platform in Malayalam, according to Hassan, was to bridge an important and much needed gap when it comes to meaningful content for Malayalam-speaking households around the world.

The vision behind the platform was also the fact that, as migration continues to make cultures and communities more spread out, there is an increased interest in regional languages globally. Statistically, most immigrant communities across the world try to retain their cultural landmarks, particularly their mother tongue and hence there remains a need for content in regional languages.

Besides JKH Holding Co., Hassan is the founder and Chairman of NeST Group, a global conglomerate of more than two-dozen companies spread across five continents. He founded NeST Group after retiring from AMP Inc., a Fortune 100 firm and the world’s largest electronic components/connector maker, as its President of Global Inter-Connect Systems business.

In his 10-year career with AMP, he diversified the company into fiber-optics and wireless technologies and helped it grow into a $1.5 billion business.

NeST Group companies employ more than 4,000 people and have products and technologies in a whole range of areas, including Internet of Things, health care, green energy, wireless and fiber optics communication systems, and media software and digital media.