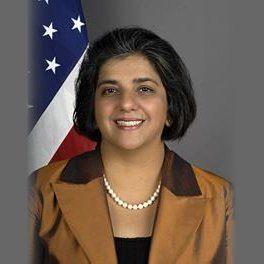 President Donald J. Trump has tapped Indian American career diplomat Geeta Pasi, who speaks several languages including Hindi and has served as political officer in New Delhi, as the new US ambassador to Ethiopia.

The nomination of Pasi, 58, currently Principal Deputy Assistant Secretary for African Affairs at the Department of State, as ambassador to Ethiopia has been sent to the Senate for confirmation, White House announced Thursday.

Pasi of New York is a career member of the Senior Foreign Service, class of Career Minister. She previously served as US Ambassador to Djibouti from 2011 to 2014 and Chad from June 2016 to 2018.

To both her previous ambassadorial posts she was appointed by the then President Barack Obama.

Pasi earned her B.A. from Duke University in 1984 and her M.A. from New York University in 1986.
READ: Obama appoints Geeta Pasi to be the next US ambassador to Chad (April 20, 2016)
She has won numerous Department of State performance awards, including the Matilde W. Sinclaire Language Award.  She speaks French, German, Hindi, Romanian, and Russian.

Before joining the Foreign Service in 1988, she worked as an institutional financial market researcher in New York.