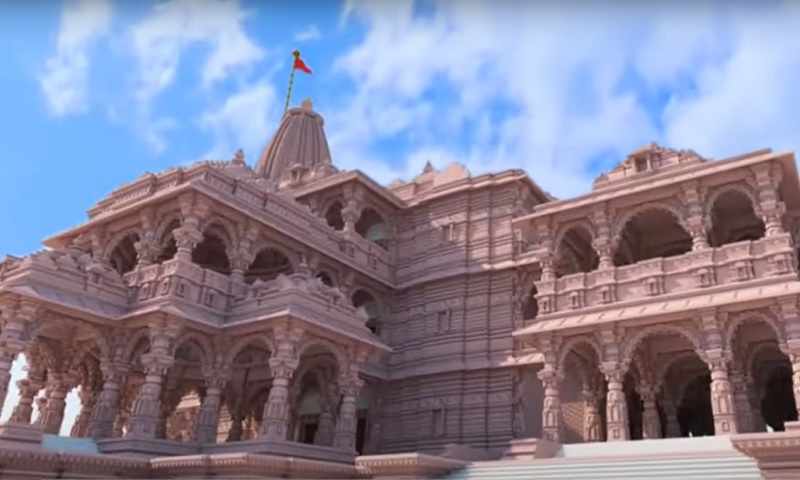 As Indian Prime Minister Narendra Modi laid the foundation stone of a temple for Hindu deity Ram at a site in Ayodhya where a 16th century mosque once stood, celebrations and protests broke out in far off America.

Babri Masjid or the Mosque of Babur, said to be built in 1528-29 by Mughal emperor Babur, in Ayodhya, Uttar Pradesh, was demolished on Dec 6, 1992 by a group of Hindu activists who believe it to be the birthplace of Ram.

In November 2019, the Indian Supreme Court paved the way for the construction of the temple by ordering handing over of the disputed site to a Hindu temple trust and allotment of 5 acre alternate land about 20 miles away to a Muslim group.

In New York, about 1,000 people celebrated the event by singing ‘bhajans’ and chanting at a traffic island on Times Square Wednesday evening, while two groups of protesters lined up on either side to heckle them, according to media reports.

Times Square echoed with the “Jai Shri Ram” slogan as participants distributed sweets at the celebrations.

Earlier, a large video display of Ram and the temple being built in Ayodhya was turned off following protests from a Muslim group claiming it was political.

In Washington, Indian-American groups celebrated the event by lighting ‘diyas’ and taking around a tableau truck displaying digital images of the Ram Temple around the Capitol Hill chanting “Jai Shree Ram” slogans.

Meanwhile, a diverse group of 20 American human rights organizations from diverse religious and ethnic communities held a large public protest against the event at New York’s  Times Square, according to a media release.

Kaleem Kawaja, Executive Director of Association of Indian Muslims of America (AIMA), Washington DC, accused the Indian government and Prime Minister Narendra Modi of having “created an anti-Muslim hate frenzy in India by hyping this ground breaking ceremony,” it said.

He deplored them for doing so “even though India’s Supreme Court declared last year that the demolition of the Babri mosque was a violation of the law.”

Several Hindu Human rights workers, including Sunita Viswanath of Hindus for Human Rights of New York, according to the release, “also condemned the fact that the holy name of Lord Ram is being exploited and sullied by the BJP party and Prime Minister Modi for political gains.” .

“Protesters appealed to the nations of the world to pay attention to these awful happenings in India and stop India from oppressing India’s Muslim community who are 20 percent of the population there,” it said.

Another organization called the “Coalition to Stop Genocide in India”, also organized a massive rally at Times Square to “protest the celebration of the destruction of the Babri Mosque in India.”

“People’s reverence for Ram has been manipulated in order to serve a vile and hateful agenda whose evil fruits are evident not only across India but now increasingly in the US as well,” Jawad Mohammed, General Secretary of the Indian American Muslim Council (IAMC) was quoted as saying.

“Islamophobia has escalated to the level of ethnic cleansing in numerous countries, including India,” Nihad Awad National Executive Director of the Council on American Islamic Relations (CAIR) was quoted as saying.

The Coalition said it “is committed to ensuring that American institutions and discourse are safeguarded from the virulent Hindutva ideology.”

“To that end, the coalition will continue to expose Hindutva front organizations in the US and their role in normalizing the human rights abuses and religious freedom violations in India,” it said.