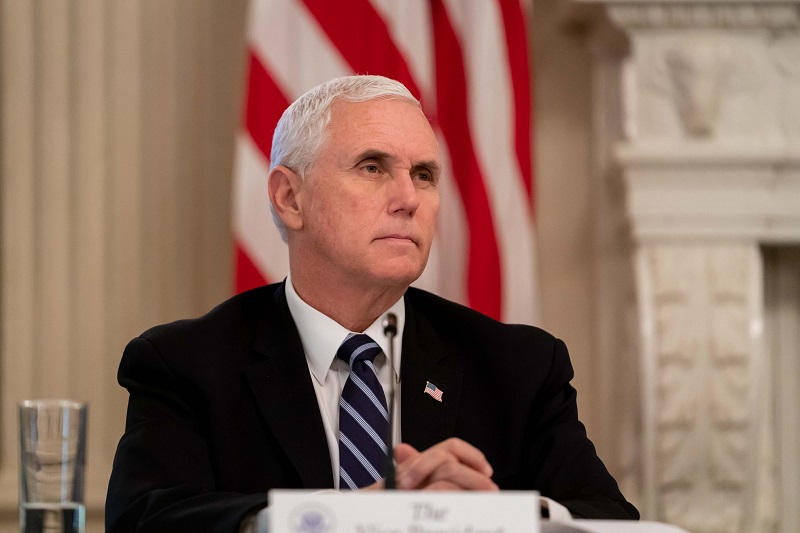 Washington, DC, September 1, 2020 – Affirming that “the relationship between the United States and India has never been stronger”, Vice President Mike Pence believes “the best is yet to come”.

Headlining a virtual Leadership Summit hosted by the US-India Strategic Partnership Forum (USISPF), Pence attributed a good deal of the momentum in bilateral ties to the chemistry between President Donald Trump and Prime Minister Narendra Modi.

So much of the strong India-US ties “is a result of the relationship that President Trump and Prime Minister Modi have forged”, he said. “They are both larger-than-life figures. People know where they stand. They have great aspirations” for their respective countries.

The vice president was responding to a comment by USISPF chairman John Chambers on the “unbelievable chemistry” between the two leaders on day one of a week-long (August 31 – September 4) event celebrating India-US ties and navigating new challenges.

“The relationship between the United States and India is also deeply personal when you think of the contributions day-in and day-out that Indian-Americans make to the life of our nation, that American businesses make to the economy of India”, Pence said. “We want to grow together”, he asserted.

“When I think of the enormous contributions of some four million Indian-Americans today, the incredible relationship that they have helped to facilitate and forge between the United States and India”, he said it reminded him that he too is the grandson of an immigrant who came from Ireland to pursue the American dream. “Four million members of the Indian diaspora across the

United States represent some of the best people in this country and they are creating wealth and prosperity”, he emphasized.

Reflecting on bilateral ties, Pence noted, at its core what explains the dramatic increase in strength of the relationship over the last several years are family ties, economic ties and shared values. “When you think about the United States and India, you think about the two strongest and most prosperous democracies in the world”, he said.

“While the relationship has grown dramatically over the last 20 years, we think the best is yet to come for the United States and India”, he added.

Speaking of the potential benefits of the ties that bind the two nations, Pence mentioned economic, strategic, innovation, “exciting partnerships” in energy, infrastructure and space exploration, upholding shared values including democratic principles on the world stage. “We are both freedom-loving nations”, he said. About the economic strides, he noted that “in the last 20 years, we have seen a 500 percent increase in the trade relationship between the United States and India”.

The vice president told the USISPF summit, “I just want that rising generation in India and Indian business leaders, both men and women, who are looking to make investments in this country today to know that America is not only open for business, but we look forward to growing the relationship between our two countries for decades to come”.

The Trump administration has been criticized for its hardline policies on immigration including a crackdown on H-1B visas largely lapped up by Indian professionals. Admitting that there are challenges with the immigration system in the United States, the vice president vowed that if the Trump re-election campaign emerges victorious on November 3, “We are going to fix our broken immigration system once and for all”.

“As the president and I have spoken many times, part of that second term agenda is going to be the kind of immigration reform that is built on the principle of a merit-based immigration system”, he said. “We want people to come to this country that are ready to participate, ready to contribute as people from India have done”.

When queried about the strain in ties with China, the vice president accused the communist country of a trade imbalance with the US, and human rights abuses including religious persecution. “We’ve seen China break their word to the world with regard to Hong Kong. We’ve seen provocative military actions in the South China Sea by China”, he said.

US strategists have long seen India as a powerful counterweight to China. On Monday, Pence told the USISPF summit, “There is no question that the (India-US) relationship that has been forged over the years, and then under President Trump and Prime Minister Modi, has never been stronger. It will strengthen the hand of those that want to see freedom in the Indo-Pacific, that want to see a future of freedom across Asia. As we (India and the US) stand together more closely for security in our economies, we believe that that will only strengthen the case for a future of freedom. We want a good relationship with every country in the world including China and President Trump has a very good relationship with President Xi (Jinping). But, we are going to continue to stand firm with our allies in the region like India”, he said.

Addressing the virtual event from Delhi, Indian external affairs minister Dr. Subrahmanyam Jaishankar noted that India and China are both rising powers and it is imperative that they reach some kind of “understanding or equilibrium”.

“Like every other country in the world, we are very cognizant of the rise of China. We are an immediate neighbor of China, so obviously if you are a neighbor, you are directly impacted by the rise of, what I say in my book (‘The India Way: Strategies for an Uncertain World’), is a potential global power”, he said in a wide-ranging conversation with Ambassador Tim Roemer, USISPF board member, executive director and senior counselor of APCO Worldwide.

Jaishankar, who has served as Delhi’s top diplomat in Beijing (2009 – 2013), pointed out that “India has also been rising in this period, maybe not at the same degree or the same pace as China, but if you look at the last 30 years, clearly, India’s rise has also been one of the major global stories. So, if you have two countries, two societies with a billion people, each with the history and culture that they have, it is very important that they reach some kind of understanding or equilibrium between them”.

A four-month-long acrimonious and deadly border dispute resulting from multiple intrusions into Indian territory by Chinese troops has severely strained relations between the two Asian giants.

Noting that China is asserting power and influence in areas or geographies “we have not seen before”, Jaishankar warned that India is not going to sit back and watch.

“This is modus vivendi between India and China and I actually say in my book, this is extremely consequential for both countries and actually for the rest of the world”, he added.

Responding to a question on India-US ties given the upcoming presidential election in America, Jaishankar thoughtfully replied, “We Indians should be comforted by the fact that over many administrations, over both Democratic and Republican, our relationship has steadily grown”. He told Roemer, “We look at the ramifications of your policies at different regions”, so what the US is doing in Afghanistan is of “deep interest” to India.

On the issue of immigration and the coveted H-1B work visas, Jaishankar pointed out that India has always been a provider of “trusted talent” and as such “immigration is a win-win” situation.