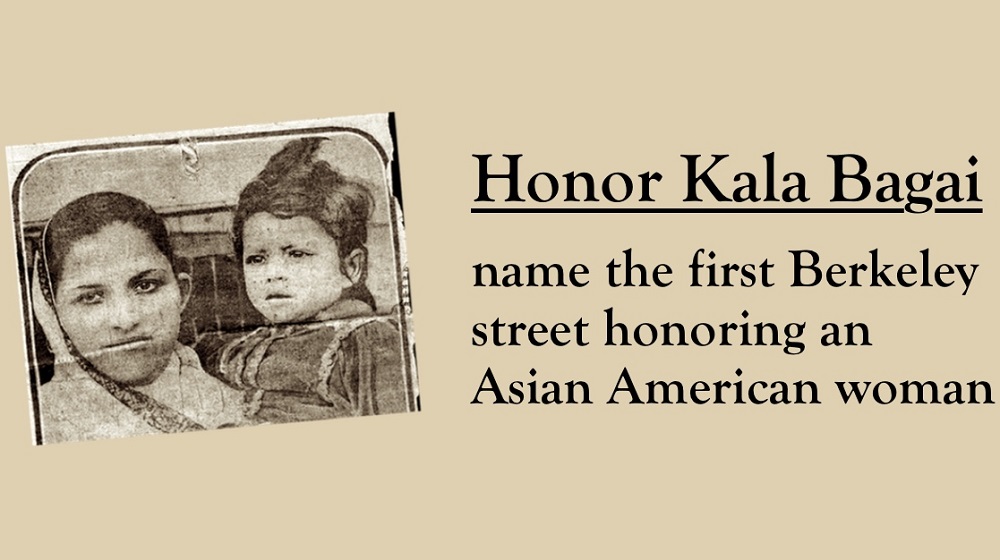 20th century crusader for immigrant rights was pushed out of her home by racist neighbors.

Kala Bagai arrived in the US with her family in 1915 from undivided India. Like many other Asians in Berkeley, she was discriminated against and pushed out of her home by their racist neighbors.

Now Berkeley — a city where South Asians have a 100 year plus history with one fifth of its population Asian  — has  named a street after this early immigrant and a victim of racism.

“My family and I have been touched to see the Kala Bagai street name get so much support from community residents and unanimous endorsements throughout the process,” Rani Bagai, Kala Bagai’s granddaughter told a Policy Committee during its recent virtual meeting.

“Berkeley residents may have pushed Kala Bagai out of her own home, but naming a street after her will feel like a homecoming, not only for Kala but for us, her family and descendants,” she said.

The street renaming is part of the city’s $10.3 million Shattuck Avenue reconfiguration project, which is nearly finished.

Part of the objective of getting the street named after Bagai was to educate Berkeleyans about the city’s racist past, said Barnali Ghosh, who, along with her husband, Anirvan Chatterjee, set up the Berkeley South Asian Radical History Walking Tour.

“She is a symbol of the people who didn’t get to live in Berkeley because of local racism and national racist immigration policy,”  Ghosh was quoted as saying.

Bagai came to the US from in 1915 from a part of the Indian sub-continent that has now become Pakistan with her husband and three children.

Her husband, who had inherited money from his parents and walked into the US with $25,000, was a member of the Gadar Movement, which wanted to liberate India from British colonialism, according to a family history written by Rani Bagai.

At some point, probably a few years after 1915, the family bought a house in Berkeley. It had previously belonged to an English couple, Bagai recounted in a 1982 taped interview with her son. When they tried to move in, they found their way barred.

“When they pulled up to their new neighborhood with all their belongings, they found that the neighbors had locked the house so that the family could not move in,” wrote Rani Bagai on the website Immigrant Voices.

“I told Mr. Bagai I don’t want to live in this neighborhood because they might hurt my children.” He agreed. “We paid for the house and they locked the doors? No!”

The family moved into an apartment upstairs. Bagai told her son they later did spend some time in Berkeley, although she did not specify any dates. The family “went back and forth,” between the cities, she said.

The racist incident with the neighbors was just only one of a long string of anti-Asian racist incidents in Berkeley, Chatterjee, who has been combing through old City Council minutes and newspapers to map those incidents, told Berkeleyside.

In 1921, Vaishno Das Bagai applied to be naturalized and became an American citizen. But, in 1923, the US Supreme Court ruled that no Indian could become an American because they were not “white.”

“He was forced to liquidate his property, including his general store,” she wrote.

Vaishno Das Bagai was devastated. “Feeling trapped and betrayed, Vaishno went to San Jose alone on a business pretext, rented a room there, and took his own life by gas poisoning,” Rani Bagai wrote.

“He left behind farewell letters to his wife and three sons, urging them to go on without him and to lead a good life. He also left a letter addressed to the San Francisco Examiner, explaining that he had no alternative left but to take his own life in protest.”

Bagai eventually remarried, moved to southern California, put her three sons through college, and, after laws changed, became an American citizen in 1950.

Her home became a center of South Asian life, earning her the nickname “Mother India,” according to a city description. She died in 1983.