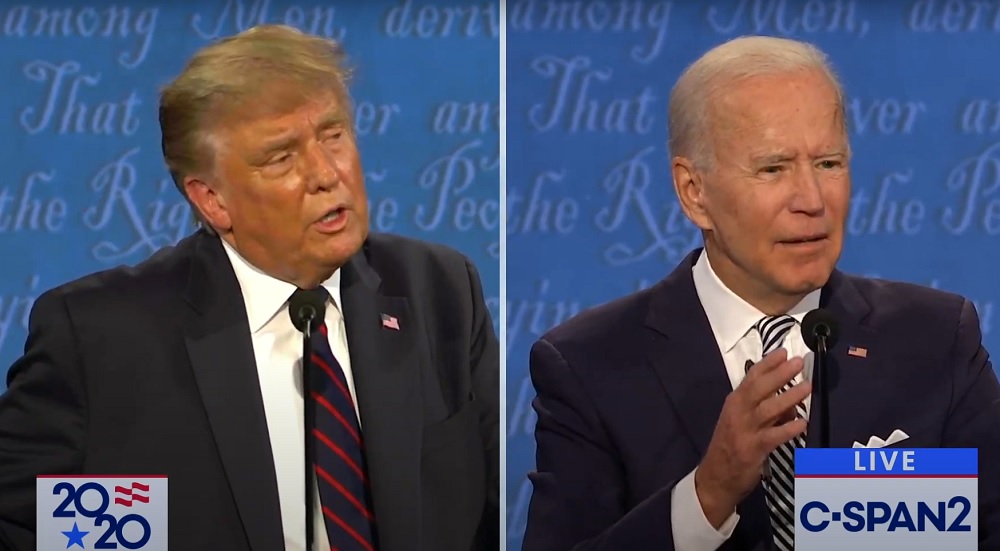 Trump accuses India of not giving a “straight count” on covid-19 deaths and dirtying the environment.

President Donald Trump and his Democratic challenger Joe Biden engaged in a no-holds barred presidential debate that seemed more like a street brawl with the rival contenders calling each other names.

Moderator Chris Wallace of Fox News often threw up his hands during the 90 minute encounter in Cleveland, Ohio Tuesday as he failed to keep an aggressive Trump in check as he relentlessly attacked Biden from the word go.

They clashed over everything from the economy to Trump’s rush to fill up the Supreme Court vacancy before the election to his response to the covid-19 pandemic interrupting each other time and again and trading insults.

If Trump accused his rival of doing nothing for 47 years saying,”I’ll tell you Joe, you could never have done the job that we did. You don’t have it in your blood,” Biden called the incumbent the “worst president that America has ever had.”

“Don’t ever use the word smart with me, Joe,” said Trump taunting Biden on his 47-year political career.

Biden, in turn, called him Russian President “Putin’s puppy”, a “liar” a “clown” and a “racist” and telling him at one point, “Will you shut up man?”

There was no handshake as the two men took the stage 35 days before the Nov. 3 presidential election with Biden leading by 6.1 percentage points in the RealClearPolitics average of polls.

With the election result likely to be delayed due to a large number of postal ballots this time, Wallace asked the duo if they would tell their followers to stay calm and would accept the result when it is announced.

Biden agreed, but Trump avoided a direct response saying, “I’m urging my supporters to go into the polls and watch very carefully because that’s what has to happen” because “they will cheat.”

Trump also sought to tie Biden to “the radical left” wing of the Democratic party saying, ”They’re going to dominate you, Joe, you know that.” Trump said.

Questioned about New York Times report that he paid only $750 in income tax in 2017, Trump claimed he had paid tens of millions in taxes under the tax laws passed with Biden’s support.

Trump also declined to condemn White supremacists outright. ”Sure, I’m willing to do that, but I would say almost everything I see is from the left-wing, not from the right.”

“Who would you like me to condemn? Who? Proud Boys, stand back and stand by,” he said referring to a far right organization. But added, “somebody has got to do something about ANTIFA,” a leftist anarchist group.

Foreign affairs came up just in passing when Trump took a swipe at even India saying it — like China and Russia — does not give a “straight count” on the Covid-19 deaths and is dirtying the environment.

Biden blamed Trump’s mismanagement of the covid-19 pandemic for the loss of 200,000 lives in the US, making up 20 per cent of the global death toll of one million with only 4 per cent of the world’s population.

On the issue of climate change and the Paris Climate Agreement, from which Trump has withdrawn the US, he said, “China sends up real dirt into the air. Russia does. India does.”

The two candidates are scheduled to meet next in two weeks, on Oct. 15, for the second debate in Salt Lake City, Utah.