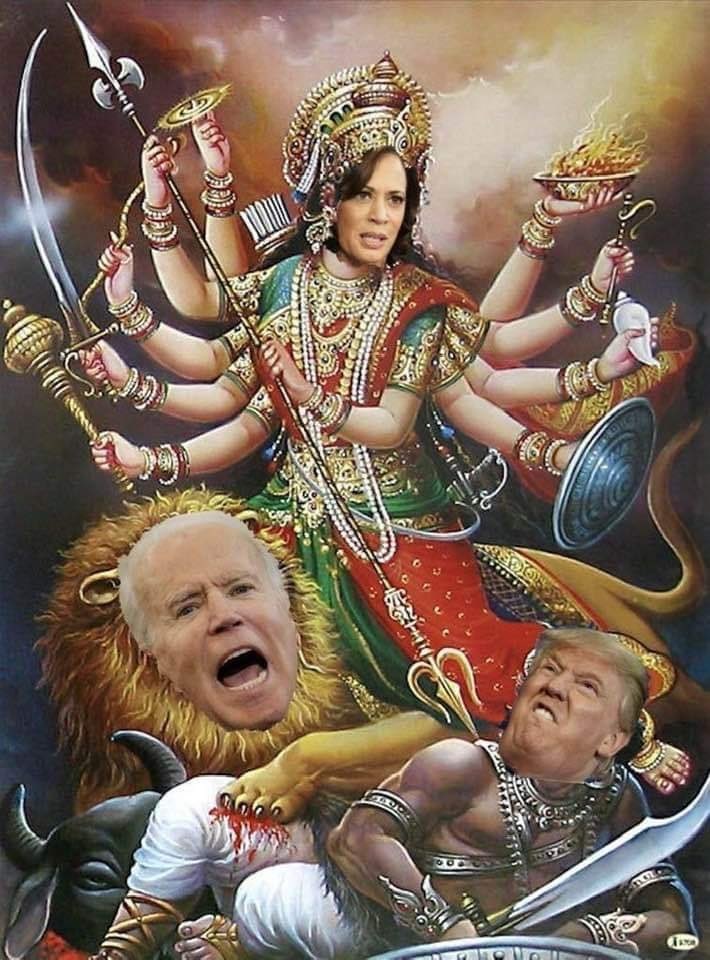 Decry use of Hindu religious iconography in the service of politics in America.

Outraged over an “offensive” image depicting the Democratic vice presidential nominee Kamala Harris as goddess Durga tweeted by her niece Meena Harris, angry Hindu groups in the US have demanded an apology.

In the now deleted tweet, a screenshot of which is now being posted by users, Meena Harris says: “I am actually speechless, other than to say that the first day of Navaratri was LIT.”

The image also showed Democratic presidential nominee Joe Biden as a lion, the ”vahana” (vehicle) of the goddess.

“Your tweeting a caricature of the feminine divine, Maa Durga, with faces superimposed, deeply aggrieved many Hindus globally,” Suhag A Shukla of the Hindu American-Foundation said in a tweet on Monday.

HAF, which represents the Hindu American community, has issued a guideline for commercial use of images relating to the religion.

Rishi Bhutada of the Hindu American Political Action Committee demanded an apology from Meena Harris even though the “offensive” picture was not created by her.

It had been circulating on WhatsApp prior to her tweet and the Biden campaign confirmed to him that the image was not created by it.

“Given that, I personally believe that an apology should come from Meena Harris even though she did delete the tweet, and no one else,” Bhutada said.

“Our religious iconography should not be used in the service of politics in America,” he added.

Ajay Shah, convener of American Hindus Against Defamation, said in a statement the image has offended and outraged the religious community.

“If you think you are going to win Hindu votes by mocking us, think again. This image is highly offensive and insulting to Hindus. Our Divinities are NOT cultural curios for you to mock and trivialize. And you delete without an apology?” noted author Shefali Vaidya said in a tweet.

Over the weekend, Joe Biden and Kamala Harris had greeted Hindu-American community on Navratri and wished for victory of good over evil once again.

Twitter users also did not approve of the image.

“Deeply offended with this image…Kamala Harris as MAA DURGA! May bhavani forgive her for this uddandata (insolence),” wrote Bitto.

“Mocking our goddess and crying for our people will give you nothing for sure. hypocriate !!Completely disgusting.You want to take milk from mocking our goddess, karma will work on the election for sure,” tweeted Saumya Mishra.

“Whole life who never acknowledged her roots from India, all of a sudden, she not just became Indian but dared to offend Hindus by morphing herself as Mother Durga…?? Deeply offended. Just deleting the tweet was not enough @meenaharris .. you owe us an apology as well,” tweeted Mini Razdan.