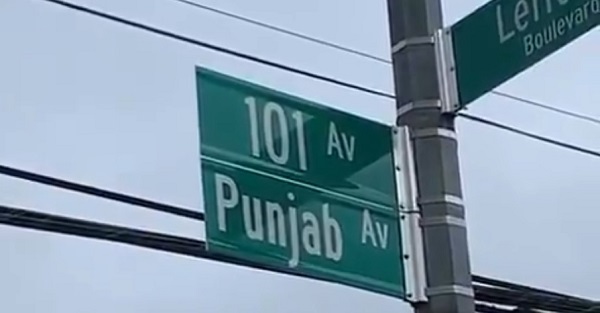 A street in in Queens, New York, filled with Punjabi culture – sounds, cuisine and clothing – has been co-named ‘Punjab Avenue’ to celebrate the Punjabi community’s contributions to the area.

Renaming of the street on Oct. 23 marked the culmination of a two year joint effort by several South Asian groups and City Council Member Adrienne Adams.

“This community has been underserved, not really recognized,” said Adams. “Invisible, which is a travesty, knowing everything that all of our community brings to this wonderful district.”

The Punjab region in the Indian subcontinent was split between India and Pakistan after the !947 partition of British India into two independent nations.

Adams said Punjabis and South Asians deserve to be acknowledged, since they have helped build and shape Richmond Hill for 50 years.

“Some of the hardest working people are of the South Asian community… Folks who have been here for a very long time,” Adams said.

“Just because we look different, it doesn’t mean that we are not humans or we are lesser Americans,” said Harpreet Singh Toor, former president of the Sikh Cultural Society.

“It means a lot. We really feel respectful that we are recognized,” said Rajwinder Kaur, a member of the Community Education Council, District 28.

Members of the Punjabi community said the co-naming of the street means more to them than they can express. They said it makes them feel like they belong and are an integral part of the neighborhood.

“We’re excited about it, because it represents our culture,” one person cited by CBS New York said. “It’s a good thing. We are very happy today,” said another.

The city said the co-naming is just the beginning. At the end of November, 97th Avenue from Lefferts Blvd. to 117th Street will be co-named Gurdwara Street, a nod to Sikh temples in the area.