This might be quite relevant in the post Donald Trump era when US President elect Joe Biden might be in a mood to discard many of the norms practiced earlier.

For several years political scientists have been prescribing different prerequisites for a country to reach global power status.

Among them were control over wide areas of land and sea around the country, dominant position in world trade, highly developed infrastructure and pre-eminent military and space capability.

Vikram Sood now adds a significant ingredient to achieve that position in his highly absorbing book, “The Ultimate Goal” on the need for nations to construct narratives.

“The battle of narratives has never been as it is today, because real power comes not from the barrel of a gun but who control the narrative,” he says.

For India it would also be relevant to study what US National Intelligence Council had said in 2004 in their report “Mapping the Global Future”.

Since then we have been hearing of an “Asian Century” in strategic literature. As a matter of fact, this expression “Asian Century” was used often during the highly successful 1988 Deng Xiaoping- Prime Minister Rajiv Gandhi summit.

My research also reveals that US Senate Foreign Relations Committee had used it in one of their studies in 1985. 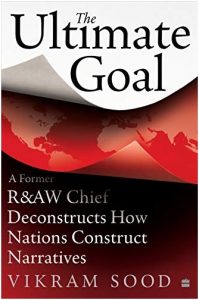 This had led to a lot of speculation that India and China might be the competitors to overtake USA and EU by the mid- 21st century.

Interestingly Jim Hoagland in his column in Washington Post on June 9, 2005 had echoed former Indian Commerce Minister Kamal Nath’s views that “China may win the sprint but India will win the marathon”.

Hoagland had also added that “the 21st century may yet favor India’s emerging reach for global power status more than China’s determined grasp for that prize”.

Sood argues that this cannot be achieved unless India firms up its “narrative” to convince others.

He takes us through centuries how nations had struggled to seek control over others for dominance and profit.

A country might possess high standards in education, food security, access to resources and to markets, military and economic strength.

Yet it could fail to reach the dominant power status and “exercise dominance in perpetuity” unless “it can tell its own story right, and in such a way as to make the rest believe in it”.

Also, a country cannot achieve political control and long-term dominance unless it is in a position to also negate rivals’ efforts.

Merely controlling or extolling own narratives and spreading one’s image of its power and “goodness” would not do.

The author reminds us that George Kennan, famous for his “containment policy” in 1948 against the rising Soviet Union had also outlined America’s future strategy through covert and overt non-military activities.

He quotes Naom Chomsky to reveal Kennan’s ideas in a secret document of February 1948: “ We have about 50% of the world’s wealth, but only 6.3% of its population…Our real task in the coming period is to devise a pattern of relationship which will permit us to maintain this position of disparity”.

This was also meant to degrade public opinion in adversarial countries of its own leaders to acquire political dominance over the enemy.

As a result the US with the mightiest military force in the world  has its reputation “unsullied” as the strongest power on earth although it “has not won a war since 1945; they have been at best stalemates, which for a super power means defeats”.

Historically the British imperial strategy was successful in forging government- private sector-litterateur axis to conceive a single narrative to defend imperial interests over their colonies and areas of control like the Middle East for perpetual dominance.

In the Middle East “They presumed that Islam could be purchased and manipulated by capturing its religious leadership”.

After the First World War they successfully maneuvered to control the Middle East by using Islam and Islamic connections, culminating in the creation of the kingdom of Saudi Arabia.

America took over where Great Britain had left after the Second World War. National interest was an ideal as long as it was British or American. Otherwise “it was deemed ‘fascist’ or ‘anti-people’, a danger to the free world”.

In this they were also helped by private and secretive groups like the Trilateral Commission and Bilderberg group.

At the same time overindulgence in narratives could also blow in one’s face. Sood quotes an interesting incident in “Hollywood Narrative Factory”: the NBC Telefilms’ patriotic film “Saving Jessica Lynch” on the ‘heroic’ rescue of a supply clerk from Iraqis during the 2003 Iraq War fizzled out when the lady denied any such incident.

Yet BBC said that it was a stunning piece of news management ever conceived.

Chapters on Russia, China and India are highly engrossing. This book has a vital message to the Indian government to take the lead in synthesizing different strands of domestic voices to “have our own narrative for the past, present and the future” as he puts it.

The book is a “Must Read” for all students and practitioners of global power politics and strategy.

MORE FROM THE AUTHOR: