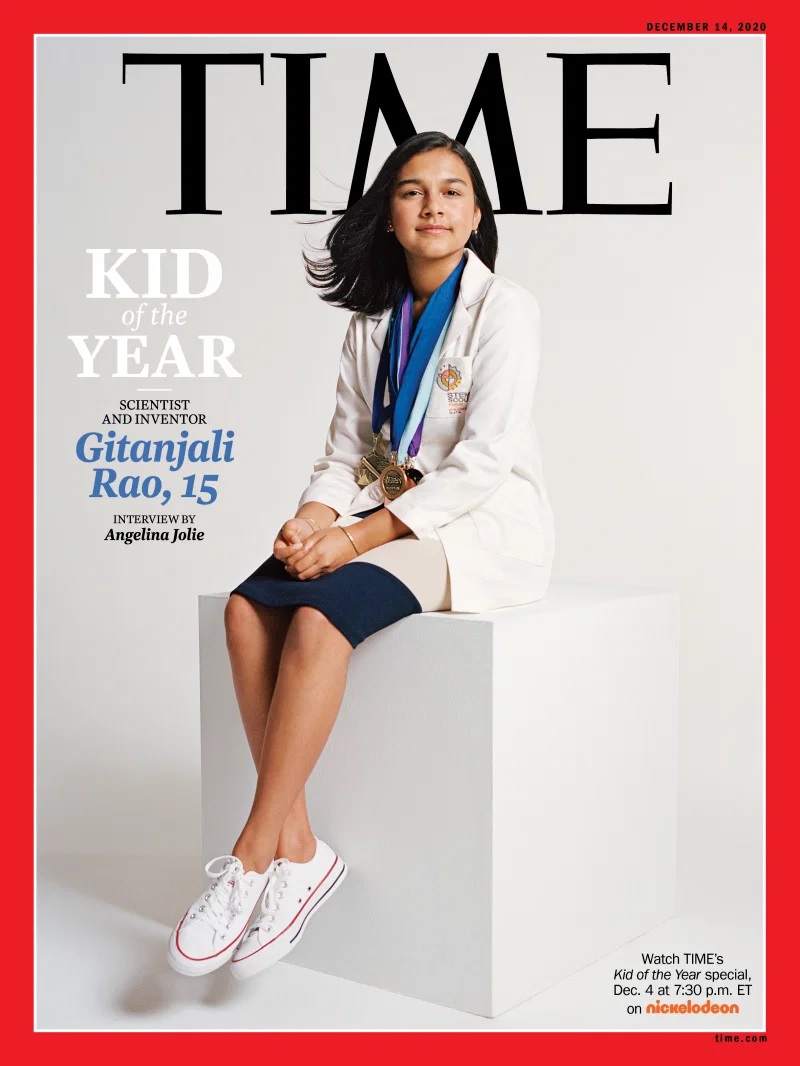 Time magazine has put an Indian American teen “scientist and inventor” Gitanjali Rao from Lone Tree, Colorado on its first ever ‘Kid of the Year’ cover.

The 15-year-old was chosen from over 5,000 nominees for her “astonishing work using technology to tackle issues ranging from contaminated drinking water to opioid addiction and cyberbullying.”

“The world belongs to those who shape it,” Time said. “And however uncertain that world may feel at a given moment, the reassuring reality seems to be that each new generation produces more of what these kids…have already achieved: positive impact, in all sizes.”

Wearing a white lab coat over a casual dress and sporting a bunch of medals hanging from lanyards, Rao is pictured on the cover of Time edition dated Dec. 14.

Seated on a white block, her shoulder length hair blowing in the wind, Rao cuts an image of cool confidence in a year that has been headlined by scientific breakthroughs.

“Even over video chat, her brilliant mind and generous spirit shone through, along with her inspiring message to other young people: don’t try to fix every problem, just focus on one that excites you,” writes Rao’s interviewer actor Angelina Jolie.

“Observe, brainstorm, research, build and communicate,” Rao said explaining her process over a video call. “If I can do it, anybody can do it.”

Rao said her generation is facing many problems that they have never seen before. “But then at the same time, we’re facing old problems that still exist. Like, we’re sitting here in the middle of a new global pandemic, and we’re also like still facing human-rights issues.”

“There are problems that we did not create but that we now have to solve, like climate change and cyberbullying with the introduction of technology,” she said.

“I think more than anything right now, we just need to find that one thing we’re passionate about and solve it. Even if it’s something as small as, I want to find an easy way to pick up litter,” Rao said.

“Everything makes a difference. Don’t feel pressured to come up with something big,” she said.

When asked when she knew that science was her passion, Rao said she always wanted to put a smile on someone’s face.

“That was my everyday goal, just to make someone happy. And it soon turned into, How can we bring positivity and community to the place we live?”

Rao said she doesn’t look like “your typical scientist. Everything I see on TV is that it’s an older, usually white man as a scientist. It’s weird to me that it was almost like people had assigned roles, regarding like their gender, their age, the color of their skin.”

“My goal has really shifted not only from creating my own devices to solve the world’s problems, but inspiring others to do the same as well,” Rao said.

“Because, from personal experience, it’s not easy when you don’t see anyone else like you.”  she said. “So I really want to put out that message: If I can do it, you can do it, and anyone can do it.”

Rao said when she was in second or third grade, she started thinking about how she can use science and technology to create social change.

She was 10 when she told her parents that she wanted to research carbon nanotube sensor technology at the Denver Water Quality Research Lab.

When asked by Jolie if she does things that kids her age do, Rao said “actually I spend more time doing 15-year-old things during the quarantine. I bake an ungodly amount. It’s not good, but it’s baking. And, like, it’s science too.”

Rao’s latest innovation is Kindly, an app and a Chrome extension – which uses machine learning technology to detect early traces of cyberbullying.

“I started to hard-code in some words that could be considered bullying, and then my engine took those words and identified words that are similar. You type in a word or phrase, and it’s able to pick it up if it’s bullying, and it gives you the option to edit it or send it the way it is,” Rao explained to Jolie.

“The goal is not to punish. As a teenager, I know teenagers tend to lash out sometimes. Instead, it gives you the chance to rethink what you’re saying so that you know what to do next time around.”

Rao is currently working on what she calls an “an easy way to help detect bio-contaminants in water – things like parasites”.

Rao told Jolie she hopes to create something “inexpensive and accurate” so that people in poorer economies can use it to test their water quality.