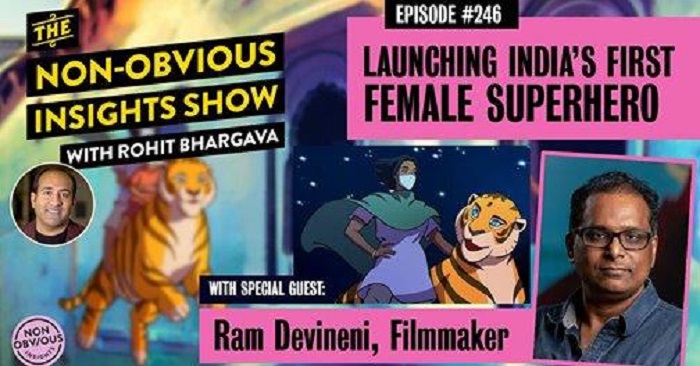 In Priya’s Mask, the new comic and film launched worldwide on Dec. 2, she joins hands with Jiya, the ‘Burka Avenger’, a popular character from a Pakistani cartoon show, as the two go about fighting the pandemic and the fake news “infodemic” surrounding it.

“Through this campaign, we wanted to challenge misinformation, dispel fear, and support the health workers and others at the forefront of the fight against the virus,” Devineni told the BBC.

He launched the “modern-day feminist superhero” in Dec. 2014, two years after the brutal gang rape of a young woman on a bus in Delhi, to focus attention on the problem of gender and sexual violence in India.

The series has subsequently been named a “gender equality champion” by UN Women.

In Priya’s Mask, she arrives riding the flying tigress Sahas (Hindi for courage), to battle “an invisible monster – a deadly virus unlike any we’ve seen before”.

Set against the rustic backdrop of Jodhpur, India, Priya befriends 8-year-old Meena to show her the importance of frontline healthcare workers and instill the power of courage and compassion during this difficult time.

Along with Sahas, Priya explains the importance of wearing a mask and working together to help end the pandemic around the world.

She also partners with Jiya, the Burka Avenger, who’s fighting to protect her city Chutneyville against a villainous assault by Baba Kaboom, who plans to take it over by not wearing a mask and spreading the virus. But, in the process, he himself catches Covid and needs help from Priya and Jiya.

“The virus does not understand or respect borders,” adds writer Shubhra Prakash, “so this was a natural synergy between both cultural heroes.”

The animation is voiced by feminist icons in Bollywood and Hollywood, including Rosanna Arquette, Vidya Balan and Mrunal Thakur and 12-year-old Sairah Kabir.

The comic, which targets young people and has augmented reality features, can be downloaded for free anywhere in the world.

Devineni, who lives in the US, says Priya’s Mask would have relevance not just in India, but globally since the pandemic has impacted people across the world.

“New York, where I live, looked post-apocalyptic. And if you see images from European cities, many of them did too. Every time I stepped out, I could only see homeless people, it was surreal, the eeriest site I’ve ever seen.”

His father, a pediatrician who has practiced in South Jersey since 1975, had to stop working for the first time since he was in the vulnerable group for Covid-19.

“He’s 80 and has health complications and we knew if he got it, he would have just died. In fact, two of his very close doctor friends – I had grown up calling them uncles – died from Covid. We watched their funerals on Zoom.”

Devineni told the BBC that when the US embassy in Delhi got in touch with him in April, asking if he’d be interested in creating a new Priya comic to launch in December for the United Nation’s 16 Days of Activism Against Gender-based Violence, “I wondered if we would be outdated by then”.

“I knew the virus would still be there and the campaign would have some resonance. Also, 10 years from now, this artwork, created during the pandemic would be a historical document, a documentation of how people dealt with it at the emotional and visceral level,” he says, adding, “but I think it’s going to be much more than that.”

With the World Health Organisation and governments in many parts of the words still finding it a challenge to get people to wear masks or maintain social distancing, means that Priya’s Mask has more relevance than ever, says Devineni.